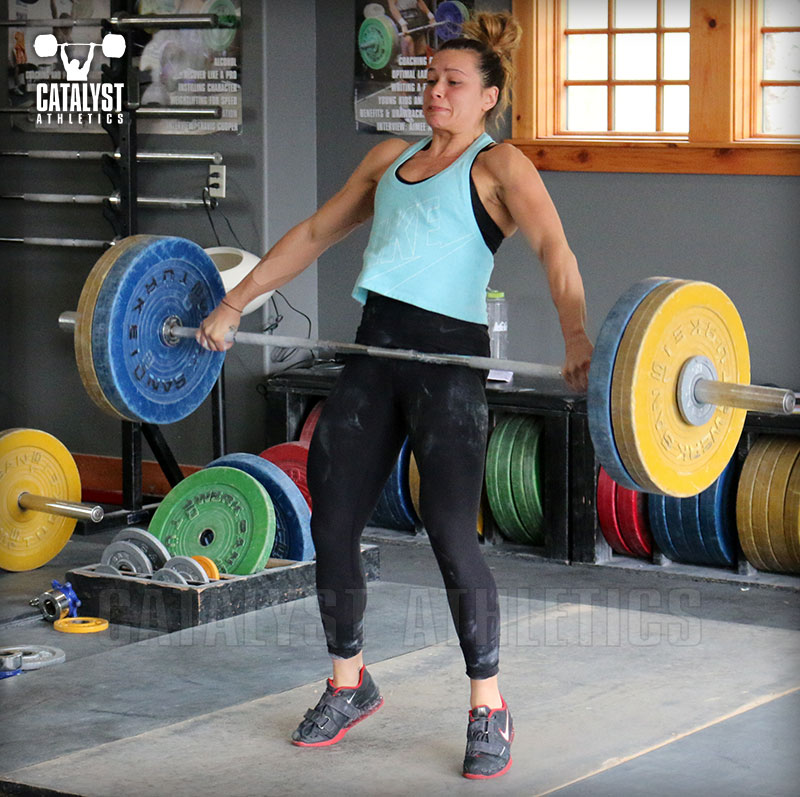 See more articles & videos like this in the Snatch & Clean Second Pull collection.
As all of you who’ve invested countless hours smashing your heads against the wall know, there are a number of tricky elements to the snatch. I want to focus on just one of them here—the finish.

The finish refers to the final portion of the upward extension, also referred to as the second pull or explosion. This needs to be a combination of explosiveness and degree of extension—that is, speed without complete extension, or complete extension without adequate speed, will limit the lift.

To a large degree, speed is something you either have or cry about not having—you can only improve it through training to a relatively small extent. Before you slowpokes get discouraged, remember that in weightlifting, like most sports, very small improvements can have very big effects.

But the finish of your snatch is the product of multiple facets that anyone can improve collectively. Following are five things to work on.

Snatches from starting positions above the ground aid in improving the finish for very simple reasons: by reducing the time and distance you have to accelerate and elevate the bar, you’re going to improve rate of force development (how quickly your body can neurologically access/activate maximal motor units with maximal force), your aggression, and the movement (including timing) of your final extension.

The most common hang and block position is one that places the bar directly in front of or above the kneecaps. This is a good one, but of course we can select variations to achieve more specific ends. For example, if the main part of your problem is a lack of leg drive, performing your hang snatches from the power position will be effective. If your hip extension is poor, a hang position with the shoulders over the bar is more appropriate.

Hang snatches are better for lifters who have some trouble with the proper position and balance in the pull because the bar and body are connected as one unit from the start, giving the lifter the chance (i.e. forcing him/her) to establish the proper balance and position. Lifts from the blocks can more easily be performed from poor starting positions and with a lot of odd tricks in the start to circumvent various shortcomings.

Theoretically snatches from the blocks are better for rate of force development because they reduce pre-tension and/or the stretch-shortening reflex relative to the hang; however, if you’re performing a fancy dynamic start from the blocks, you’re circumventing this benefit to a large extent. If RFD is a big concern, perform your block snatches with a static start.

Many times a lifter is great at extending completely and forcefully when doing snatch pulls, but when snatching, completely changes the motion (to be clear, the motion of a pull and a snatch are not in fact identical—I’m referring to elements like leg drive and aggression). By performing a snatch pull (correctly) immediately before a snatch, you’re more likely to pull the snatch more similarly to the pull. As an added bonus, the pull tires you out a bit and forces you to be more aggressive and complete in the extension of the subsequent snatch.

Regular old snatch pulls are a great exercise—they teach and train proper balance, position, timing and aggression in the pull, and it is much easier in a pull to extend completely than in a snatch. However, be careful of pulling too heavy—eventually you’ll exceed the threshold below which you can extend properly; beyond it, your extension will begin to be cut short, which means the lift, while still beneficial in many respects, is not helping you with the specific problem we’re addressing here. If you want to go as heavy as possible, consider doing snatch deadlifts instead of pulls (but do pulls at lighter weights too). To help ensure proper balance and a complete extension, try holding yourself up in the extended position for a 1-count.

There are a million jumping exercises, and pretty much any of them will help with the explosiveness in the finish of the snatch. My go-to jumps are box jumps (less than max height, but with maximal effort and height in the jump), back squat jumps, and broad/long jumps.

I’ve argued plenty of times that the best way to increase the speed of your snatch and clean & jerk short of inventing a time machine and selecting parents with more suitable DNA is to improve your technical ability. The more proficient your lifts, the more you’re able to apply the physical traits you do possess—if you’re not particularly quick by nature, it’s even more important for you to maximize whatever speed you do have. Sort out your technique with a particular focus on timing of the initiation of the second pull (usually too early), position when initiating the second pull (usually too far back on heels and shoulders too far back), and proximity of the bar and body (as close as possible without touching until contact at the hips).


Greg Everett is the owner of Catalyst Athletics, coach of the USA Weightlifting National Champion team Catalyst Athletics, author of the books Olympic Weightlifting: A Complete Guide for Athletes & Coaches and Olympic Weightlifting for Sports, director/writer/producer/editor/everything of the documentary American Weightlifting, co-host of the Weightlifting Life Podcast, and publisher of The Performance Menu journal. He is USA Weightlifting international coach, coach of over 30 senior national level or higher lifters, including national champions and record holders; as an athlete, he is a fifth-place finisher at the USAW National Championships, masters national champion, masters American Open champion, and masters American record holder in the clean & jerk. Follow him on Instagram, Facebook and YouTube.