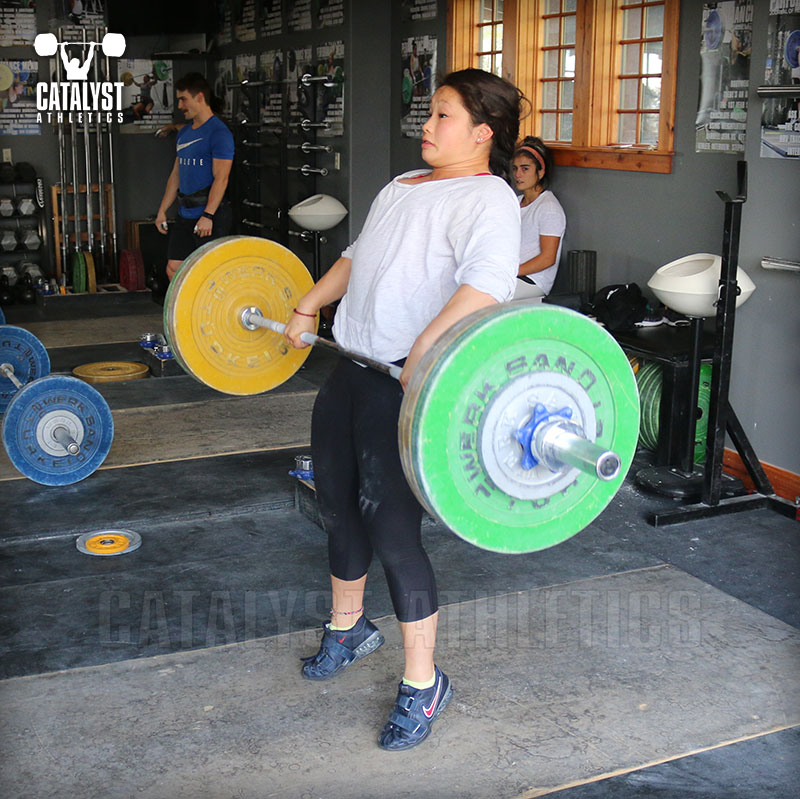 A question I get frequently, and one I break a lot of hearts responding to, is how to improve speed in the snatch and clean. My answer is heartbreaking because speed—and by speed I mean the actual speed of muscular contraction and consequent joint motion—is overwhelmingly determined by what your parents genetically bequeathed you. No matter how hard he trains, Richard Simmons will never beat Usaine Bolt in a foot race, and the sooner we all accept that, the sooner we can quit crying and do what we can to actually move faster in the lifts.

Even if we’re not genetically wired to be truly explosive, we can still train in ways that maximize our ability to move quickly in the snatch and clean, and that includes avoiding training in ways that actually make us slower.

The most effective thing we can do to improve speed is become more technically proficient. The optimal mechanics of the lift allow us to transfer as much of our muscular effort as possible into accelerating the bar, and for the bar and body to move with as little resistance as possible, meaning that we’re maximally exploiting the space under our genetic ceiling of speed or explosiveness.

We’re not actually producing more speed in the truest sense, i.e. our physical capability hasn’t changed, but we’re using what we have more effectively, and in this way, we can actually create dramatic improvements. This is why you shouldn’t despair when I tell you that speed isn’t something you can train to a great extent—all we need to do is improve your ability to lift successfully, and that we can do.

When it comes to training and physical adaptation, we can actually push some progress with smart choices and methods.

First is the way in which we execute the snatch, clean and certain supplemental exercises like pulls and squats. Quite simply, lifting fast will allow us to become as fast as our genetic capacity allows; lifting slowly will ensure we stay slow.

This means that when we perform snatch and clean pulls, we need to make the conscious effort to move the bar as fast as possible every time, unless we have a very compelling reason in specific cases not to—an example may be needing to slow the movement, or at least part of it, in order to work on a technical problem like shifting balance excessively on the foot.

Speed in squats is also important and often overlooked—so many times squatting is performed as an afterthought, with minimal effort and consideration. Again like pulls, unless we have a very good reason not to, we should be moving as fast as possible in the concentric phase of the squat.

This applies to the snatch and clean as well—the pull of both, and the recovery from the clean. A reasonable portion of our training needs to be in an intensity range that allows speed (relative to ourselves)—usually the 70-80% range. If the overwhelming volume of our competition lift training is done at weights that we can't move quickly, we’re training to lift slowly. This is one good reason to use power variations, or hang/block variations with lighter weights.

Bear in mind that the actual speed is less important than the intent to move as fast as possible; that is, your maximal speed may not be that fast in absolute terms, or relative to another athlete, but that doesn’t matter—if you’re actively and aggressively trying to move as fast as you can, you’re developing the pertinent neurological elements.

Finally, jump training can be helpful, although it’s not going to produce the kind of magical results many of us imagine. There are a few jump variations and methods I prefer:

First, I like to combine jumps with squats—perform a set of squats immediately followed by a set of jumps with no rest. These can be box jumps, vertical jumps, or back squat jumps, all of which can be done with a full squat and/or pause. A pause is more similar to the effort we’ll be using in the Olympic lifts rather than a standard countermovement jump, and I also prefer to eliminate or minimize arm swing in any jump variations. Adding jumps this way forces the body to recruit more and higher threshold motor units it may not otherwise access.

For independent jumping exercises, I like back squat jumps best, usually using 20-25% of best back squat. This gives us a little resistance so we’re working more on power than pure speed, and also naturally eliminates any assistance from an arm swing.

Add one jumping exercise one to two days per week—remember that despite how it feels in the moment, jump training is very neurologically demanding, and it’s really easy to overdo it if you go crazy and throw 100 jump reps each week on top of your existing training. Ease into it, and remember that you don’t need a lot of volume to get a response.