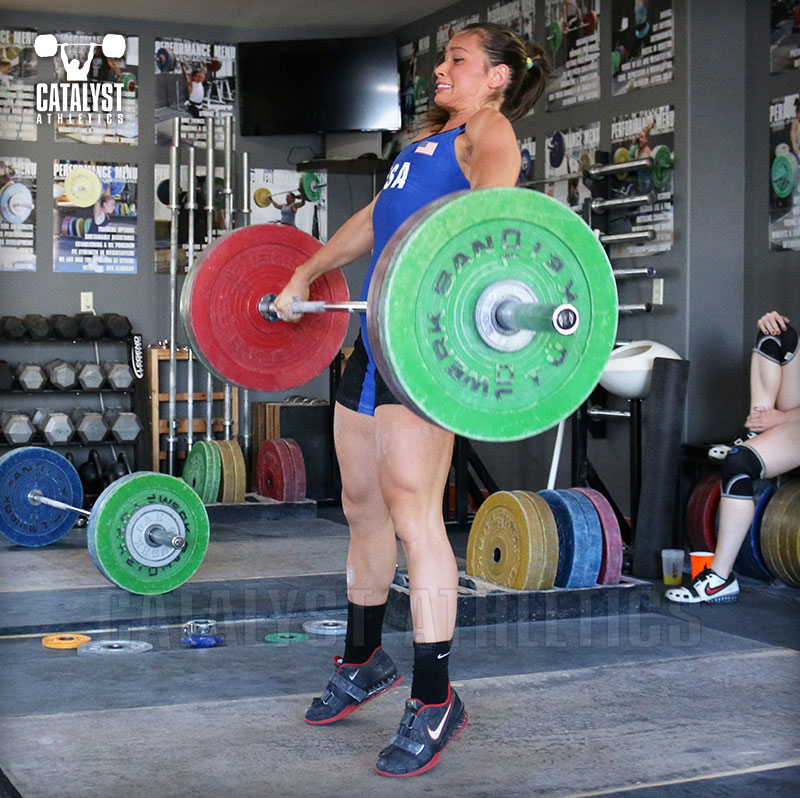 See more articles & videos like this in the Snatch & Clean Second Pull collection.
I've said it a million times, and I'm going to keep saying it because not doing it is a common problem—use your legs. I’ve joked more times than is funny that we need to just get a recording saying Push harder with your legs to play repeatedly over the speakers in the gym so I don’t have to say it anymore.

The hips get all the attention in the sports world, including weightlifting. Don’t get me wrong—hips are extremely important and in no way am I suggesting otherwise by writing this article—but the obsessive focus on the hips too often obscures the importance of the legs, and leaves them out of the discussion to the point that too many people are unsure of what they’re for other than holding tattoos.

In essence, hip extension without adequate leg drive is like trying to jump off of a soft surface—imagine trying to do a maximal vertical jump in sand, or while standing on a floating inflatable raft. Your maximal force production will result in very little elevation because so much of that force is absorbed by the surface compressing/moving. If you make that same jump attempt off of a block of concrete, essentially every bit of that force will be put into elevating your big butt into the air.

Leg drive against the ground is the solid platform that the hips need to be maximally effective the snatch or clean pull. If the legs are pushing against the ground the entire time the hips are exploding open, that hip extension power is being transferred into the bar completely (ignoring minor things like your back arch giving a little, arms extending slightly, etc.). If instead the legs are not driving hard enough, or they cease driving while the hips are still completing their extension, you now have that soft surface under yourself—it’s your legs. The force created by the hips is partially absorbed by the soft legs—if they’re not actively extending, they will be passively absorbing some of that force, meaning less will go into accelerating and elevating the bar.

The second reason leg drive is so important in the snatch and clean pull is that it helps dictate the trajectory of the barbell—obviously we want to gain as much vertical movement while minimizing horizontal movement as possible.

Like leg drive creates a solid platform to allow us to transfer force into the bar, it also creates an anchor to direct the hips’ extension. If you extend your hips as hard as possible and do nothing in particular with your legs, you will create an overwhelmingly horizontal motion—your hips will move forward and only up to the degree that must occur as the legs rotate upward from a backward angle. Moreover, without the vertically-oriented push of the legs against the ground, the hips will continue forward past that vertical plane. Because the bar and hips will come into contact in the second pull, this means you’re literally pushing the bar forward with your hips, and even farther because they’re crossing through that vertical plane that would otherwise be their forward boundary.

Additionally, leg drive will help preserve the balance over the foot, as it's extremely difficult to actually drive against the ground forcefully all the way to the top of the pull if you're leaning forward or backward. This in and of itself, irrespective of the hips’ interaction with the bar, will contribute to maintaining an overwhelmingly vertical barbell trajectory.


The Harmony of Legs & Hips

A call for aggressive leg drive in the pull has been misrepresented by some as a claim that hip extension power is not important. Let me just be plain: that's the stupidest thing I've ever heard in my life. In no way are the two mutually exclusive, and the very point is that they need to work in concert to produce the best results.

I explain the harmony of leg drive and hip extension this way: Hips provide the speed and legs provide the elevation. Obviously both contribute to each to varying degrees, but that's an accurate enough picture for our purposes here, and pretty much anywhere else in the practice of weightlifting.

Extend your hips as forcefully and aggressively as possible, by all means—just make sure you’re pushing your feet against the ground with equal vigor while you do it.

Matt
Greg- Thanks for putting out such quality information, your articles and videos have been extremely helpful as I've been learning the lifts.
Thomas
Thanks very much for this

I've been having this problem ever since my coach told me to mark the bar rattle with my hips... then noticed I was leaning the hell back. I see now I was focusing only on hips and this article resonates with my experience.

Can't wait to try out the focus on knees/legs

Jorge
What exercise would you recommend to increase that leg drive?
Jorge - Pulls or high pulls would be good.