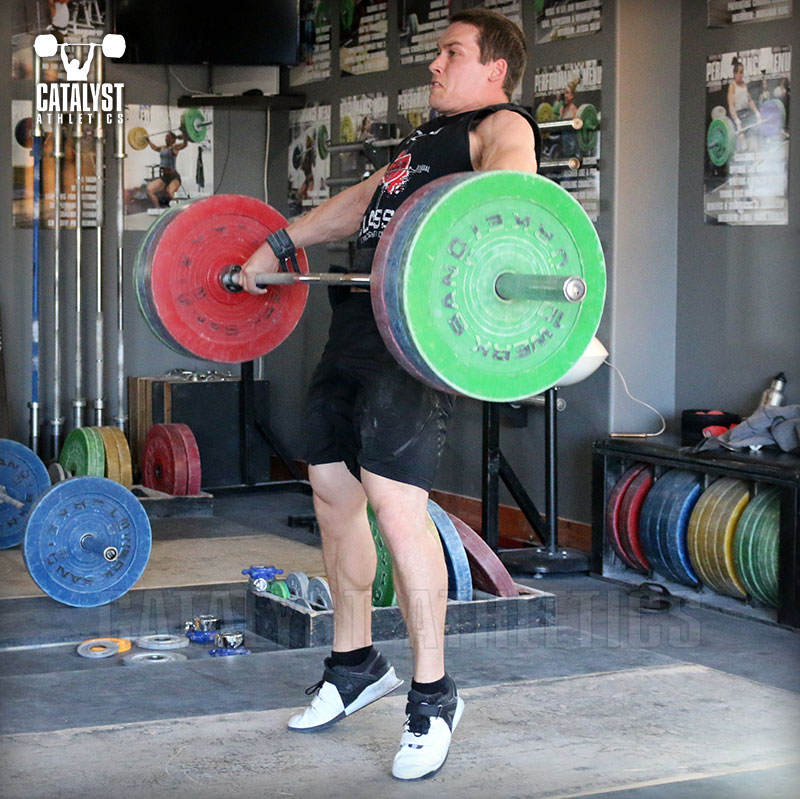 See more articles & videos like this in the Snatch & Clean Second Pull collection.
One of the toughest concepts in weightlifting to grasp—and to explain—is the timing of the transition between the second and third pulls of the snatch and clean. The basics are simple: you elevate and accelerate the bar upward by extending the body and driving against the ground; when you’re finished with that, you pull your body under the bar into the receiving position. Easy. Let’s all go break some world records. 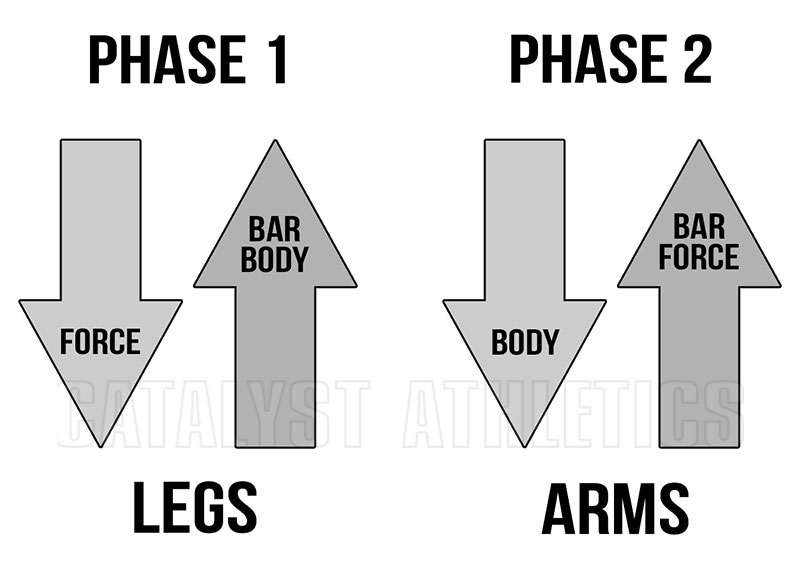 Where it gets tricky is when you start to understand that it doesn’t work optimally to simply go completely limp-legged at the moment you reach full body extension. In other words, you can’t break the lift perfectly into two totally distinct segments of lifting up and pulling under—there is a critical time of overlap.

The bar needs to continue moving upward as much as possible, even while your body is moving under. Your effort to pull against the bar to move under it in the third pull actually does help preserve its upward momentum to some degree, even with zero pressure against the ground. However, the key moment during which you can best preserve the existing speed and draw out that bar’s elevation most effectively is at the initiation of the pull under the bar.

In short, if you maintain the pressure against the ground with the feet by continuing to drive with the legs as you first begin pulling under, you’ll be able to continue the bar’s upward motion as well as possible, gain a bit more elevation, which translates into time and space to get under it, and you’ll have the added benefit of better maintaining your balance and position as you move under the bar.

The bar needs to continue moving upward as much as possible, even while your body is moving under.

This does not mean you’re performing a high-pull and then moving under the bar once it reaches your sternum—that’s far too late, and even if you can achieve that bar height in a pull, you’ve lost far too much speed and momentum by that point to be able to move under it. We’re talking about a split second delay before lifting the feet (or removing the pressure if you don’t actually lift them) to move down.

Another way to think of this is as tying the actions of the second and third pulls together into a single, fluid, continuous motion. Rather than executing the second pull to completion, then beginning the third pull as a distinct pursuit, I like to think of it as essentially waiting to be forced to move down. It’s as if you’re trying to pull the bar up with the arms as you would for a muscle snatch or muscle clean, but the weight on the bar prevents it, so that same pull against the bar instead forces your body down.

This way of thinking about it also helps you remember that the bar should always be moving up, even as you’re moving down. That is, you never stop pulling the bar up—the only thing that changes is whether or not you’re simultaneously pushing against the ground (the exception being the last moment in the snatch when you have to push up against the bar rather than pull on it).

You can practice this with snatches/cleans from power position, which make it easier to focus on that last moment of leg drive into the transition; with a complex of snatch/clean pull + snatch/clean, in which you try to replicate the feeling of that extended pull in the lift that follows; and with tall snatches/cleans done by starting on flat feet and pushing up onto the toes as you begin pulling under (shown in the IG video below).

You can start tall snatches flat-footed or on the toes - OR you can do this variation. . Start flat-footed and push up onto your toes as you begin to pull to feel the transition - there should be an overlap of the drive through the ground and the pull under rather than there being a clear separation. . There should never be a moment of slack in the system. You are ALWAYS pulling against the bar - the only thing that changes is whether or not you’re also pushing against the ground with the legs. . Tag a friend who does nothing for a moment at the top of the snatch and just hopes the universe intervenes. . #snatch #weightlifting #catalystathletics #garagemind #loudmindquietmouth #usaw #iwf #teamWAG #puori #earthfedmuscle @earthfedmuscle @puorilife @powersofthesnow