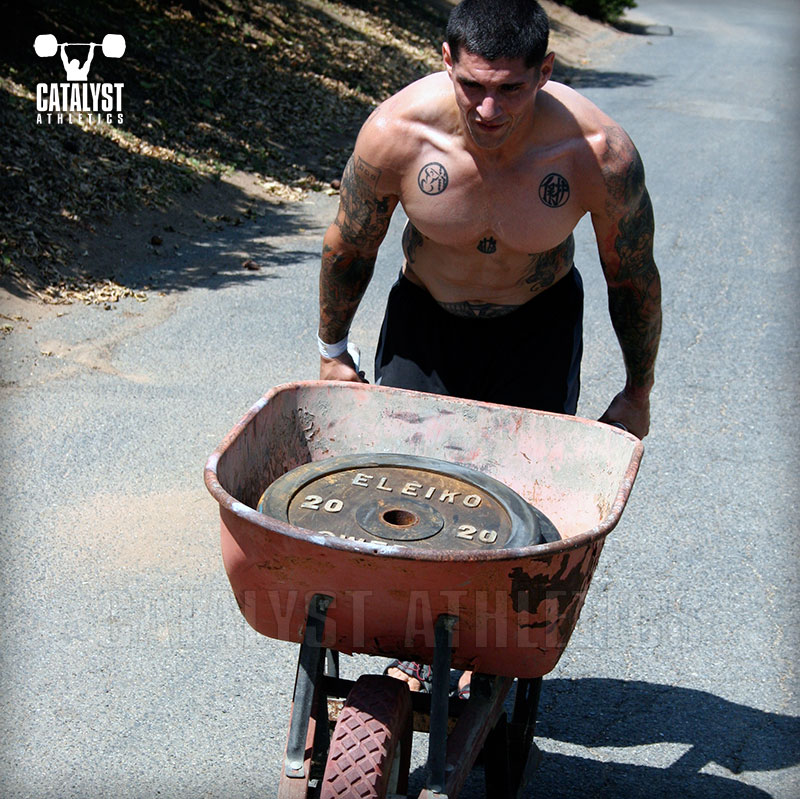 It’s somewhere in the middle. GPP (general physical preparation) for the sport of weightlifting is a topic that attracts a lot of opinions and about which a lot of contradictory advice exists (at least in the US, or in the US-dominated world of online weightlifting discussion).

I attribute the confusion largely to the difficulty of clearly delineating GPP from SPP; the fact that in the US, lifters very rarely move through a progressive system of training from a young age; and the related fact that most US lifters are working within compressed timeframes rather than what would internationally be considered an appropriate career duration.

The simple answer is that GPP is any training that isn’t directly weightlifting-specific. The problem is that if you actually consider that, the line isn’t as clear as would be convenient. Obviously the snatch and clean & jerk are sport-specific, and running is not; but what about the back squat as a simple example? It isn’t directly related to the competition lifts, but is used specifically to improve their performance.

The easiest way for me to think about what constitutes GPP for weightlifting is to lump into that category anything that isn’t an obvious variation of a competition lift (like powers, hangs, pulls) or a very obvious lift-related exercise (like squats, snatch balances, jerk recoveries, etc.).

When an athlete starts at a young age with the target of becoming a world-class weightlifter, his/her coaches have a long-term plan to systematically develop that individual as well as possible to handle the rigors of training and allow the body to perform in the necessary way at the necessary level.

The analogy that seems to makes this easiest to understand in my experience is the sport of gymnastics. In order for a gymnast to perform an advanced skill, he/she has to have fundamental abilities like holding the body in a straight, rigid line—a simple plank on the floor evolves eventually into a front lever on the rings, for example. If you can’t hold your body in a straight line in a plank, you will never magically start being capable of a front lever.

So in the ideal circumstances, young athletes are developing critical physical traits like trunk stability, grip strength and stamina, bone density and connective tissue strength, explosiveness, and an appropriate degree of conditioning/stamina. This type of training can also be timed to coincide optimally with biological development to allow maximal progress.

For those athletes who were not fortunate enough to be recruited and trained properly from age 8 onward (nearly every American weightlifter), there is considerable catching up to do in this regard, and much less time and less optimal circumstances (biologically speaking) in which to do it. Necessary GPP training needs to be incorporated concurrently with all the SPP.

The way this is usually done is fairly simple—the bulk of GPP is performed in the period of time immediately following the biggest competition of the year. This is a period of reduced intensity and specificity of training, and begins more as active rest and transitions more into preparation for the upcoming year. In addition, the beginning of each training cycle will contain more GPP, which will be reduced as the cycle progresses toward a competition and specificity to the competition lifts increases. Finally, certain elements such as trunk stability work will always be present in some form.

I’ve tried to create some categories here for organization, but understand there is certainly overlap among the activities listed.

Joint Stability Training with odd objects, carrying and dragging are all great for developing joint stability and control. Carrying one or two dumbbells or kettlebells overhead, or a barbell with chains or weighted bands hanging from it, walking with a sled (especially backward), farmer’s carries with one and two arms, pushing a heavy wheelbarrow, picking up and carrying sandbags, etc. are all good choices.

Hypertrophy Building muscle mass isn’t just for aesthetics—it’s functional in a number of ways in a number of situations. Bodybuilding-type training has its place and time for most lifters.

Joint Preparation & Health Lower-intensity, higher-repetition weighted work helps develop connective tissue strength. This is one benefit of bodybuilding-type exercises—relatively light weights and sets of 8-20. Additionally, a variety of movements helps reduce the likelihood of repetitive use injuries or chronic pain.

Grip Specific grip work like spring grippers, hanging from a pull-up bar, pinch lifts, etc. is all great, but you can also get a lot of good grip work with exercises that offer other benefits simultaneously such as farmer’s carries, wheelbarrow walks, and picking up heavy things that don’t have convenient barbell-shaped handles.

Unilateral Activity Weightlifting is nearly exclusively bilateral, the only exception being the split jerk (and that barely counts since it’s essentially a static position). It’s helpful to get in some unilateral work like lunging variations, step-ups, 1-legged RDLs, and 1-arm pressing and pulling exercises periodically to avoid imbalances in strength, mobility and control.

Trunk Stability If we had to prioritize all of this, trunk stability would be number one on the list—without it, you can’t accomplish much. Like grip, trunk stability can (and should) be trained directly with ab and back exercises, but will also be developed with things like carrying.

Conditioning Commonly conditioning refers to cardiovascular endurance, trained with low-intensity, usually monostructural activity, e.g. running, rowing, cycling. At least in my opinion, this has very little benefit to the weightlifter, and can be counterproductive in significant doses. Primarily this type of activity belongs in the warm-up or as active recovery on rest days (in small, very low-intensity doses). It provides benefit to mobility and joint health in the sense that it’s an alternative to being sedentary on rest days, which stiffens an athlete up, but it’s not magic, and the sport of weightlifting does not require any significant degree of cardiovascular endurance—what it does require is easily achieved through normal training. Some argue that it improves an athlete’s recovery ability or stamina for long training sessions, but neither of those is logical, let alone proven. The ability to run for 3 hours has zero relation to the ability to perform high-intensity barbell training for 3 hours.

Mental Health Finally, the contribution of GPP-type training to a weightlifter’s mental health shouldn’t be overlooked or underestimated. Weightlifting is a tough sport, and very monotonous because of the extreme specificity of the competition movements. Snatching and clean & jerking over and over and over for years on end is very mentally taxing. Being able to perform novel movements, even if only for brief periods of time once a year, can be exactly the kind of mental break a lifter needs to stay focused and motivated long term.

Don’t get excited and start spending an hour each day on this kind of training in addition to all of the more specific training you’re doing—dose appropriately. Start with maybe one carrying or dragging exercise per week, 1-2 jumping exercises per week, 2-3 days of quick bouts of bodybuilding work per week, and daily ab work. If you’re taking some time off after a big meet, reduce your barbell work considerably and have some fun with this stuff. If you’re brand new to lifting and don’t have much of an athletic background, dose the GPP more heavily relative to the specific weightlifting work for a while.


4 Comments
Damien
Thank you. More newer weightlifters need to understand this.
Andrew
Wait. Are we making an argument to incorporate CrossFit into a Weightlifting program?
No. It sounds like you are.

Great article, most weightlifting coaches here on the east coast don't usually incorporate much GPP into their training programs. I personally see it as vital to the success of any athlete who wants to make it to the top.

One thing I think most athletes struggle with is conditioning of the posterior chain, especially the hamstrings. Most of the athletes I get are extremely anteriorly dominant and struggle with learning the basics of lifting because of this.

Hopefully more coaches will read and understand this article so we can get more athletes to their true potential.

Keep up the good work brotha!