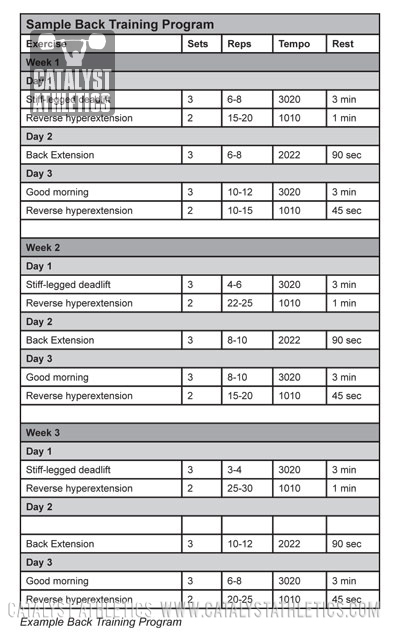 Because the classic lifts and common supplemental exercises such as squats and pulls naturally provide a considerable workload for the muscles of the lower and middle back, generally this area will require somewhat less specific training than the anterior and lateral aspects of the torso.

For convenience, we can classify core work in terms of body regions, type of muscle activation, and type of movement, and do so in a manner that facilitates effective training. The two broadest categories are the back and the abdominals (to include all anterior and lateral musculature). The two categories of muscle activation are static and dynamic, the former comprised of isometric stabilization of the torso, and the latter of concentric and eccentric movement. Of course, many effective exercises will involve both types of activation, but generally we can classify even these based on the dominant type.

For the back, we have the movement types of spinal extension, hip extension, combinations of the two, as well as combinations of static activation of one and dynamic activation of the other. In addition, we have exercises that involve stabilization of the torso as a whole, in which no distinction can or needs to be made between the back and the abdominal musculature.

Because in the execution of the Olympic lifts the role of the trunk is to simply act as a rigid support structure, we can prioritize the function of static strength, within the context of both force transmission and the resistance of compression and torque. The remaining categories of core exercises function more to support the balance of strength development than to directly improve weightlifting performance.

How much specific back training is necessary and desirable will vary according to the needs of each athlete. Those with relatively weak backs may perform some type of fairly intense back work 2-3 days each week; lighter work may also be included on other days. Heavy training such as stiff-legged deadlifts, RDLs and good mornings are best performed at the end of heavy training sessions to allow recovery before the next heavy session in which the back will need to function optimally. Lighter work such as back extensions or reverse hyperextensions can be performed more frequently and in between heavy training sessions because it won’t have so dramatic an effect on the back’s function the following day; in fact, such light work in reasonable volume often proves recuperative for many lifters. Heavy back work is generally best performed in the 5-8 rep range; lighter work is generally best performed with reps between 8-15.

When an athlete requires back training, but is already performing a high volume of work and consequently has little additional recovery capacity, exercises such as good mornings and weighted back or hip extensions are ideal options. Such exercises allow intense work by the spinal erectors to extend or maintain extension of the spine without requiring systemically taxing heavy loads like RDLs and stiff-legged deadlifts.

The lower back is typically one of the slowest regions of the body to recover from training. The volume of lower back work should be controlled to ensure adequate recovery for the primary training exercises—some athletes will be able to manage quite high volumes of training, while others will require back training be kept quite low in volume and infrequent.

Back training should generally be consistent in terms of exercise selection for a period of time that includes a series of 2-5 exposures. That is, such exercises should be treated like most strength exercises and their performance over time involve an increase in work via loading and/or volume. For example, we may use the good morning for a period of 3-4 weeks, increasing the load slightly with consistent or decreasing reps and volume with each exposure. In a following period, we may instead use the RDL, again increasing the loading with each exposure. Like any other exercise, progressive overload during a period of persistent capacity levels is effective for improvement.

If performing additional (or exclusively) light back work, the athlete can use a less structured selection of exercises on such light days, and attempt to simply achieve variety. For example, he or she might on a series of light training days alternate between unweighted back extensions and reverse hypers, either gradually increasing rep numbers (although not too aggressively since these are not the primary back exercises), or stimulate instead through variation of reps, sets, tempos and other minor variables.

The following is a sample back programs that can be integrated with a lifting program. It is a three-week cycles that demonstrate a short series of exposures to given exercises with simple overload in terms of weight or volume. In this program, weights are not assigned. Instead, set and rep-ranges are prescribed with the expectation that the athlete will feel out an appropriate weight for the exercise.

After three weeks, the program can be used again with a change of exercises, or even simply a change of tempo, sets, reps, and/or rest periods for some variety. For example, we may repeat an identical cycle, but allow the athlete to use a completely natural tempo for all exercises, which will automatically allow increased loading and provide a considerably different stimulus.


3 Comments
Jordan
You can just integrate this workout into your existing heavy lifting routine?
Daniel
For someone trying to recover from a herniated disk, would a program like this be recommended?
Matt
Could have provided some better info I think.
It's a nice simple program but maybe a % to work at could be helpful too :) I'm not used to training such high rep ranges!