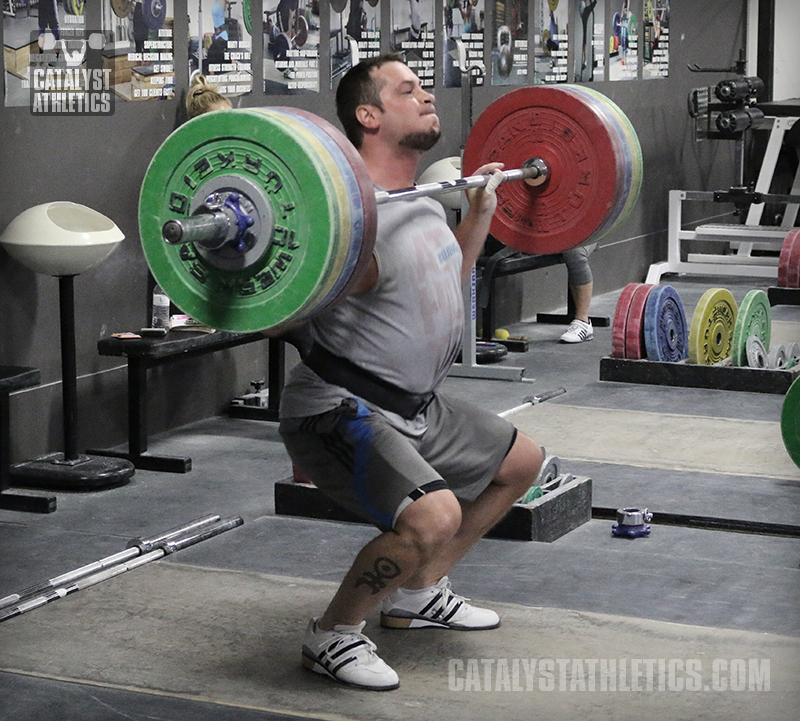 
10 Comments
Matt
Thanks for the great info as usual Greg. Timely read for me sitting in the ortho office waiting for my knee x-ray.
Greg Everett
Good luck Matt!
Mike
Wow I was just wondering what I was going to do after I strained my shoulder over the weekend making it difficult for me to do anything overhead. I'm in the middle of the 5 wk front squat emphasis program... any recommendations on what I should substitute for overhead mvmts like snatch or jerk? or should I just to stick to squatting, pulls, and cleans to a tolerable weight until the shoulder gets better? Thanks.
Billy
Great read Greg. Thank you for sharing!

Question: Would you follow the same %s? For example, someone with a knee problem who can't squat below parallel or perform a full snatch or clean, modifying with bottom-to-bottom squats and power oly movements.

How would you modify?

Stick with the squats, pulls, etc. add additional back and ab work, and start incrementally moving from passive ROM with the arm to unloaded movement, to light weights and slow, controlled movement (e.g. pressing), and then back to the full meal deal as tolerated.

You would need to adjust the weights - feel them out the first workout, and then do your best to follow the weekly weight changes. For example, if something was originally 85%, and you found you needed to change it to 75%, and the next week it's 88%, change that week to 78% - in other words, you're making the same increases and decreases, but at a modified level according to what you're capable of doing with the modified exercise.

Billy
THANK YOU!!
Marcus Wolford
I'm 31, dealing with something that looks and feels just like osgood schlatters on my right tibia/knee. Was getting close to a 500lb squat but have now stopped squatting entirely for a few weeks as it was making me very nervous. Have started doing box squats, split squats and leg presses in an attempt to keep my shin more vertical and less forward knee movement while continuing to work my legs.

Have you or any of your athletes dealt with this Greg?
Greg Everett
Marcus -

Well... patellar tendonitis is really common, so if you're just getting pain and tenderness at that tibial tuberosity, that's probably what it is. There's an article on the site about coming back from that... actually maybe 2. A search will bring it up.

Thao
Hi, its fastidious paragraph about media print, we all understand media is a enormous source
of facts.