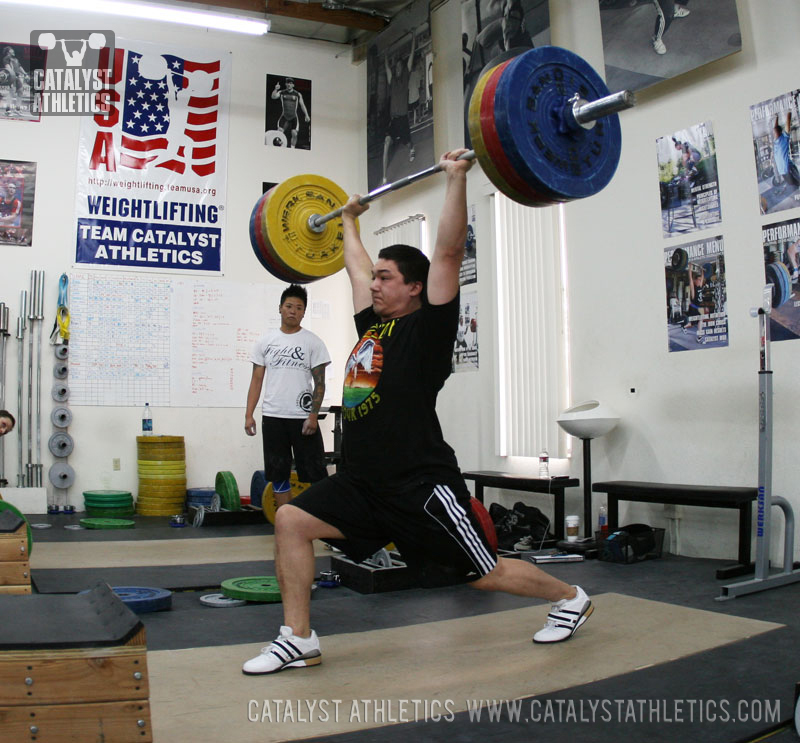 Gerasimos Asks: Hello i want to ask a question about jerk training. When a lifter has a weak jerk (strength or technique) is better to perform jerk and assistance exercises in front or behind the head?

There are a huge number of possible causes for problems with the jerk. Since this question explicitly asks about both strength and technique, yet doesn't describe any specific issue, I'll try to cover both topics in a general sense without being so vague it's useless. Eventually I'll try to remember to actually answer the question about lifting from the front or back.

Inadequate length strength in the split receiving position can either mean an inability to support the weight that's been jerked, or it can actually prevent the lifter from getting into a sufficiently deep split position as weights increase. Again, squatting strength is the basis, but athletes can have surprising strength deficits in a split position. To address this, any number of single-leg squatting or lunging exercises can be used, but I do have some favorites. The basic lunge is the first simply because it's simple and easy to teach and there are many options for loading it safely. Next is an exercise I picked up from former Polish coach and current USA OTC resident coach Zygmunt Smalcerz. With a barbell on the back as it would be for a back squat, the lifter will step out into his split receiving position, making sure to maintain proper balance between the front and back feet, holds this momentarily, then steps forward into a split position with the other leg forward. Essentially this is a walking lunge, but rather than a typical deep lunge, the position is identical to the split jerk receiving position. This exercise can be done with very heavy weights - as much as 100% or more of the lifter's best jerk.

If the athlete's upper body is not strong enough to support the weight overhead, this can be address in a number of ways. Pressing exercises like the press and push press are the most basic; the push press is usually preferable because it allows the use of heavier weights as well as provides good practice of the dip and drive mechanics of the jerk. To overload the overhead position further, jerk supports and recoveries can also be used. For jerk supports, the lifter will place a barbell in a power rack on high pins, just a few inches below the height at which it would be with the athlete holding it overhead in a standing position. The athlete will bend at the knees and hips to get underneath the bar with the arms in a fully locked overhead position, then use the legs to lift the bar from the pins, holding the weight overhead for 3-5 seconds. Focus should be on locking in the elbows and shoulder blades forcefully. Jerk recoveries are similar, but the athlete will begin in the split position and lift the bar from the pins as he recovers from the split to a fully standing position.

Inadequate upper body drive strength is best addressed with the push press, which will also help timing for the jerk.

With regard to technique, there are too many possibilities to address directly. What needs to be done is a diagnosis of the source of the problem so it can be appropriately handled.

Exercises from behind the neck can be used if there are problems locating the correct overhead position, with driving the bar forward rather than up and back, or with failing to place the body under the bar properly to support it. The two most common related problems are 1) driving the bar forward and 2) pulling the hips back out from under the bar.

The first is an issue of the dip and drive phase of the lift, and can have a number of causes. The athlete may have his weight too far forward over the feet right from the start or may shift too far forward during the dip. If the weight is balanced during the dip and drive, the bar still may get pushed forward (and the lifter backward) due to an improper rack position or a change in the rack position during the dip or drive. Push presses, power jerks and split jerks from behind the neck can help the athlete feel what should be happening when lifting from the front with regard to body placement and balance.

The second problem is similar and has the same effect of placing the barbell in front of the base of support rather than balanced above it. In the split jerk, the hips must remain under the bar in the receiving position in order to support the weight. When jerking from the front, the torso position must change, and this can lead to unintended backward movement of the hips. The split jerk from behind the neck places the torso in exactly the position it will need to be in the split - the bar needs only to move straight up and the torso and hips need only to move straight down. Again, this drill can help the athlete feel what should be happening.


15 Comments
Sam Smith
Dear Greg,
I want to thank you for your programming as it has helped me increase my snatch 15 lbs in 2 weeks.

My question is, my jerk is holding back my clean so I'm wondering if you have any programs or cycles with a focus on overhead strength? Thanks

Off the top of my head no, but scroll through the cycles and look for one with a lot of jerks.

Michael
Hey, Greg. I have a question. I am 6'4" with an arm span longer than that of other guys my height. When I snatch, I am full collar to collar but it feels as though I need more room to widen my grip. How do I fix that?
Greg Everett
Michael -
I'm not sure what kind of answer you're looking for here... if your grip is maxed out, it's maxed out. If you want to get the bar higher into your hip when you snatch, your only options really are bending your arms (not recommended) or shrugging up/back as the bar moves toward upper thigh.
Michael
Thank you for the help. It actually helped me out a lot. I have another question regarding the depth of a split in a jerk. I feel as though when I try to split real wide like I've been told, I lose stability because my shoulders bounce. But when I try to rely more on a dip, drive like say, Klokov, I feel better but end up almost pressing them out near my top weight and end up cutting my split short. I have video proof if you need it.
Ben
Just my opinion but the advice you're seeking can't come from two different situations being mentioned here. You're talking about receiving the bar in the split and then talking about the dip portion of the jerk. And at no point is there a question. Hence, no response from Mr. Everett. Or maybe is just busy as usual. Also, Klokov is a strong dude so he can get away with certain faults in technique. I wouldn't mimic everything he does.
Joe
Hey Greg

I have seemed to plateaued on my split jerk. I haven't hit 92k in a while as a matter of fact I have bee having trouble hitting 85k since. Are there a few exercises that can help me? I am a 62k masters lifter. (72k snatch / 92k C&J). Thanks

Greg Everett
Joe -
What helps will depend on what the problem is.
Joe
Hey Greg

Thanks for responding. So I feel like that I need to dip quicker but when I do I feel like I lose power. Also I can get it to eye level but just can't seem to get underneath the bar after 83-85k. Again I m not sure why because I know I have done 92k before. Thanks again.
Greg Everett
Joe-
You can try more push presses, power jerks, jerk dip squats, jerk springs and adding those things into complexes with the jerk to work on that dip strength, position and speed/elasticity. But it sounds like you're driving it fairly high but not getting under it - press in split, push jerk in split, jerk balance, jerk bnk, jump to split, etc to work on actually getting under and strength in the split position.
matt
Greg, thank you for your post. I have a question regarding the snatch. When snatching, I am told often that I am not opening my hips and starting my second pull to soon. Now, I have read many articles and watched many videos but something is still not "clicking" which is extremely frustrating because I work really hard at it. I know I need to be patient starting my second pull and I try but I still dont think I am getting that hip opening explosion I see in so many other lifters. What can I do?
Roberto
Hello Mr. Greg, I have a big big problem with the arm lock out, I can do an easy clean but the lock out is always bad. I have very weak shoulders ( I can not press 40% of my best clean). Do you think that press exercises must be the key for my problem?
Thanks.
Greg Everett
Roberto -

Yes, add some presses and push presses to your training. You don't need a huge press, but aim to get your press up to about 50% of you clean.

Thanks for the great programmes and advice and general great website.

I'm having an issue with jerks whereby I can push press the same weight of my max power jerk (90kg) and my split jerk is only 5kg heavier, so surely this isn't a normal ratio? For instance I find I could do 5 x 75 kg push presses but would really struggle to cleanly do 2 x power jerks at the same weight.

Would this be a technique issue with the dip and drive part of the lift? I do find that when I fail a rep it tends to be that the bar is over my head height but too far in front of me. Any advice great appreciated cheers!

This is hard to tell without seeing what is going on. I recommend posting videos in our fourms to get some help.