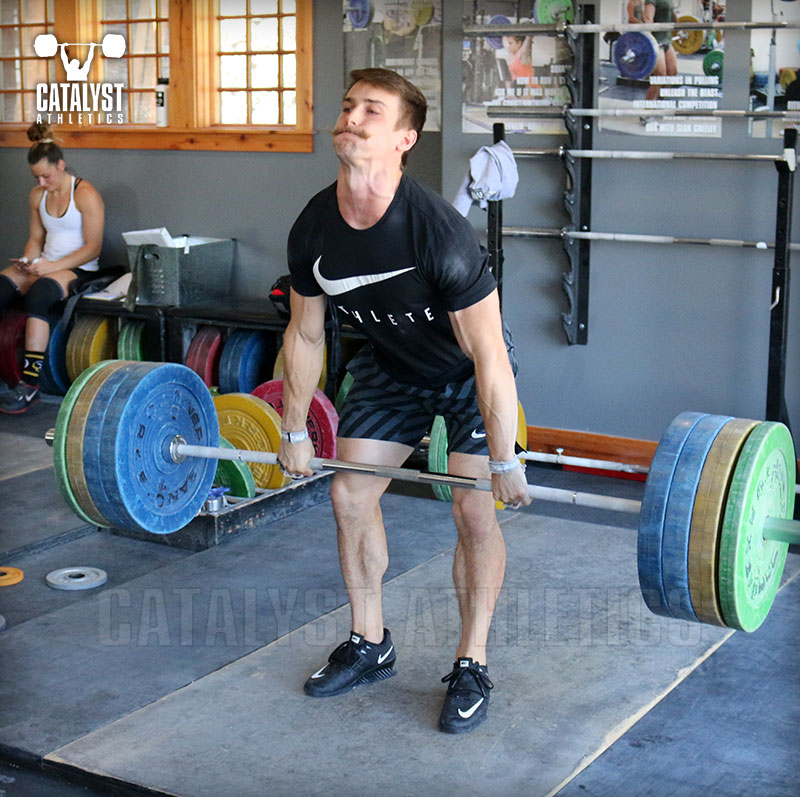 We all tend to get caught up in technique coaching for the snatch and clean & jerk—it’s the most obvious problem to address, and it’s arguably an easier part of the sport than something like programming. More specifically, I think more often than not, people look for coaching cues that will somehow magically communicate something the athlete has been not yet able to comprehend, and produce an instantaneous physical response in the form of a perfect lift. As convenient as this would be, it doesn’t work that way.

First of all, a coaching cue doesn’t communicate much at all—it is by design as simple as possible. We’re trying to reduce a command or a reminder maximally to produce one or a few words we can yell out to an athlete or tell ourselves in the moment. Its meaning has been established previously in training—it doesn’t itself teach the athlete or communicate an idea, but remind that athlete of a concept that he or she has already learned and needs to apply. Yelling “Legs” at a lifter means nothing unless that lifter knows that what you’re asking for is that he/she drives hard against the platform with the legs all the way to the top of the pull.

The main problem with coaching cues is people’s brains (this is the main problem with just about everything, but that’s beyond the scope of this article). Our brains want to interpret, modify, consider, reframe, etc. I had one athlete who for mercy’s sake will remain unnamed, who would literally take every cue I gave her and find a way to reword it—invariably in a lengthier, more complicated way. It took me a while to figure out that this is what she was doing and it suddenly explained why it was always so impossible for her to understand what I was telling her. If you don’t understand what your coach is telling you, or you’re not sure what a cue is referring to, ask and clarify! If you knew how to figure it out on your own, you wouldn’t need a coach.

My point is that coaching cues have very real limitations, and sometimes, you need to just abandon them for certain things and approach the problem from a different angle.

When it comes to motor skills, your body is smarter than your conscious mind. In fact, your conscious mind is an idiot most of the time and only gets in the way and confuses your body and drives your coach up a wall. Finding a way around it is often the best bet for progress.

your conscious mind is an idiot most of the time and only gets in the way and confuses your body and drives your coach up a wall.

This is where well-designed, selected and/or implemented exercises fit in. Consider this example: Your lifter (or you) has a weak, unaggressive and imprecise third pull in the snatch—the bar swings out and doesn’t finish overhead in the right place. You can watch your lifter snatch and tell them every single time to keep the bar close, pull down harder, get it behind the neck, and punch straight up into the bar overhead, but it’s very unlikely that he/she will suddenly do this.

Instead, you might prescribe tall snatches and teach them how to do that exercise. This does a couple handy things. First, it allows you to teach the athlete elements of the snatch with which he/she is struggling, but in an isolated manner, getting his/her mind more focused on the motion in question and less distracted by the million other concerns he/she has while actually snatching. Second, all the lifter really needs is a pretty basic understanding before he/she can start using the exercise—and then the exercise is somewhat self-correcting and self-teaching. The lifter may be able to be sloppy and swing around an empty bar, but with a bit of weight, he/she will be forced to refine that movement into what’s necessary for success—an aggressive pull down with the arms, bar proximity, and proper timing and position overhead.

Another good example is trying to get a lifter to stay over the bar longer in the snatch or clean. Again, you can yell “stay over the bar” a million times, but that doesn’t guarantee it will happen. In this case in particular, this can be a strength issue in addition to or instead of a technique issue—that lifter may not be physically capable of staying over the bar longer, so even if they genuinely understand what needs to be done, and how to do it, it doesn’t matter.

Using halting deadlifts, or segment deadlifts or pulls in the athlete’s program will give you an opportunity to help the athlete reach the exact position you want, practice it, and strengthen it, again without all the additional concerns and distractions of a complete snatch or clean. Training this motion and position will then mean that the lifter will naturally move this way in the snatch and clean eventually—without you ever again uttering a single word on the topic.

Lifter dips and drives forward in the split jerk? Start using power jerks, or a power jerk + split jerk complex. A straight dip and drive will develop on its own.

When you learn to find exercises that train the body directly and circumvent the conscious mind, you’ll start to find more rapid improvement and a lot less frustration for both athlete and coach. This doesn’t mean you’re going to achieve overnight fixes, but it can certainly save a lot of time and headache.

Wannette Retief
Hi Greg, I've been reading a lot of your articles and wasn't sure how I could go about to ask for help. I've only been doing the olympic lifts for a few months and really struggle with my snatch. My coach just tells me to stop bending my arms too quickly and says I'm not using my legs. But what can I actually do to correct these technical errors - which exercises would be most beneficial? Please help me coach Greg, thank you so much!
Try snatch from power position and snatch pull + snatch.

Greg Everett
Sebastian Chiriboga
Hi Greg, thank you so much for so the knowledge you put out here and in your Podcast. I'd appreciate if you could help me out. I keep rushing my hip extension in the snatch. I don't finish my extension and rush under the bar which leads to missed lifts. Any suggestion on any exercise I can work on? Thanks!
Snatch from power position, any hang snatch from knee or higher, snatch pull + snatch (or hang snatch).