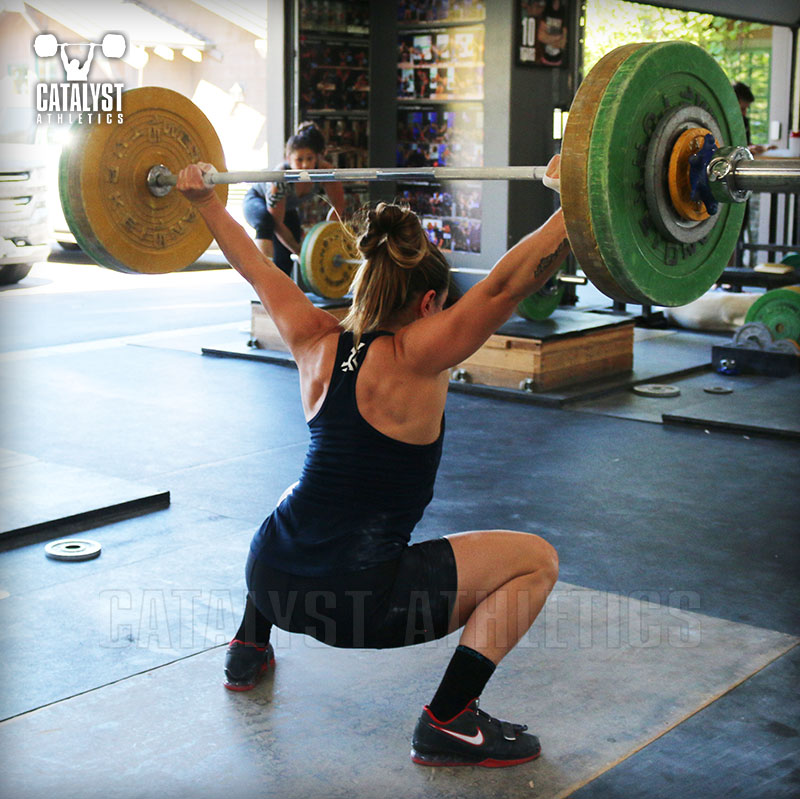 See more articles & videos like this in the Weightlifting Competition Performance collection.
We posted an article last week about how to handle the final week leading into a weightlifting competition, and it generated some questions about how to choose openers and attempts for a meet, which involves not only a basic strategy on meet day, but some kind of evaluation of the lifter’s present ability before game day.

There are a number of different ways to do this, and which you use will depend on a few things, principally which works best for you or each of your athletes individually. That is, you shouldn’t necessarily rely on the same protocol for all of your lifters; you may need to do things a little differently to get the best results for each.

Generally speaking, you’re going to see what you or your lifter is capable of in the last 3-4 weeks before the competition. During this period, usually a competition mesocycle, whether formally recognized as such or not, there will be an emphasis on heavy singles in the snatch and clean & jerk. This may not always involve actually testing maximal lifts, but it will be at least in the high 90%s. How the lifter handles these heavy weights, both in terms of what the weights actually are, and his or her consistency and confidence with these higher intensities, will give you a general sense of what he/she is capable of in competition.

Testing Commonly PRs are tested at least once in the competition phase of training to determine the lifter’s actual abilities and then these are used as goals for competition. The trick with this is first setting the lifter up for successful PR attempts, and then ensuring he/she is adequately recovered in time for competition to be able to make them or more again. How exactly to do that is beyond the scope of this article; needless to say, there are myriad programming factors that influence this.

Timing Generally it’s a good idea to time the last maximal clean & jerk 10-14 days out from competition, and the last maximal snatch 7-10 days out. However, what works for you or your lifters can vary quite a bit both due to your/their peculiar abilities and the nature of the program surrounding these attempts. For example, if you or your lifters are adapted to frequent high intensity competition lifts, such lifts can be taken much closer to the meet, e.g. early in the week of competition. If on the other hand the lifter trains in a more volume-oriented manner with relatively infrequent heavy competition singles, a longer period of time between these testing singles and the competition is a good idea.

Variation Lifters will typically need more time between maximal snatch and clean & jerk tests and the competition the older they are, the heavier they are, and the more advanced they are (with the exception of an athlete who is adapted to frequent high intensity lifting as mentioned above). Beginning lifters don’t need any significant tapering because they’re limited primarily by skill (and often even mobility), so heavy and maximal snatch and clean & jerk reps have relatively little taxing effect on their bodies.

Once you have the lifter’s new PR snatch and clean & jerk, you can determine how you want to approach it to attempt to match or even beat it in competition. If your lifter is a competition lifter (i.e. historically lifts more in competition than in training), you’re probably going to aim to beat whatever he/she did in the gym in the competition phase with the assumption that not only will he/she be fully peaked for completion, but will have the psychological arousal of competition to push even further.

In the case of gym lifters—lifters who always do more in the gym than in competition—you’re going to try to match those PRs at best. In the cases of lifters who cut a lot of weight for meets or always have much lower results in competition than in the gym, you’re going to be shooting to beat competition PRs rather than all-time PRs, and you can determine your goals for this based on how much the training PRs have improved since the last competition—e.g. if the lifter’s training PR in the snatch increased 5kg, you can aim to beat the previous competition PR by 5kg.

In either case, the opener should be a no-brainer—a weight the lifter has made many times and is very confident with. Missing an opener is a bad way to start a meet. It should be selected to set up the next two attempts according to the meet goals as well. For example, if a lifter is sure about anything between 90-95kg for the snatch, and the goal is to hit 100kg, you’re probably going to want to open closer to 95 to take more reasonable jumps. Opening at 90 means two 5kg jumps, which is generally too much in the snatch at weights under 130-140 or so. Opening at 93 would allow for a series like 93-97-100, which are reasonable and decreasing jumps. Or 94-97-100 if a lifter likes even jumps.


Getting by without Testing

Sometimes, and with some lifters, you’re not going to test maximal lifts outside of competition—that is, competitions are the only place you’re going to truly try to make snatch and clean & jerk PRs. In this case, obviously you have to find a way to determine openers and goal attempts without having the actual experience.

The first place to start is to always intend to beat the previous competition. If the lifter’s opener at the last meet was 97kg, the opener at the next meet should be 98kg at minimum. I set this as a standard for my lifters regardless of anything else—they know that unless there’s some really good reason not to, they’re always going to open at least 1kg higher than they did at their last meets.

Next, you’re going to have to use the information from the training cycle to help you decide where you or your lifter stands. If everything during the cycle improved, e.g. squats went up, pulls were heavier than they’ve ever been, complexes or doubles or whatever primary competition lift variations being done improved, you can be confident in PRs in the snatch and clean & jerk. The trick will be deciding how much of a PR can be expected, and you’ll have to decide that based on how much improvement has been seen in the cycle. Typically it’s a good idea to be fairly conservative when planning, and it can always be adjusted on meet day during the warm-up if it becomes clear the lifter is ready for more.

Again, the goal is always to beat the previous PRs, whether competition or all-time, so the opener needs to be selected as a weight the lifter can hit basically any time, but within range of the ultimate goal so there can be a reasonable series of jumps from start to finish—begin with a weight the lifter can’t miss, and end with at least a competition PR. The second attempt should split the difference, while potentially being a little closer to the third attempt.

I always have a plan for all 6 attempts for each lifter going into a meet—this is the ideal meet situation, i.e. everything is going as planned and the lifter is making the planned lifts. This is where you start from.

Once the competition begins, however, you may need or want to adjust your lifts. Let’s say you’re in a session where 6 lifters are opening at the same weight you are. That can be a nightmare for warming up. If you drop your opener 1kg, you then will precede all of them and know your timing much better. If you increase 1kg, you may be after all of them, in which case the timing will also be easier, but there’s more of a chance of you getting screwed if there are misses, for example.

If you’re in medal contention, or for some reason you really want to beat a specific lifter, you’re also going to have to adjust your weights to jockey for position. However, be smart about this—better to make lifts and stay in reach while also potentially pushing your competition into misses than to miss yourself and lose the opportunity to pull ahead.

Sometimes a lifter is going to be out of shape for a meet due to injury or something else that has caused a decrease in fitness; or maybe it’s simply that it’s an insignificant local meet and the lifter is training through it instead of peaking for it. In such cases, there will likely be different goals—rather than going for PRs, for example, maybe the goal will be to go 6/6 with more conservative weights; or maybe the goal will be to try a bold opener in a no-consequence situation. Or it may just be to beat the previous competition of similar circumstances.

Another possibility is that a lifter is attempting to make certain weights and nothing else matters—that is, all he/she cares about is making a certain lift or total, and a bombout is no worse than a lower number. This may be when a lifter is trying to qualify for a national meet, make an international team, break a record, etc. In such a case, it can make sense to open much higher than the lifter normally would and just take the chance of missing, because again, he/she doesn’t care about making A total, only THE total.

With all this variation and guesswork, it’s critical to maintain good training and competition records. The more of these you accumulate, the better you’ll be able to predict what a lifter is able to make based on the training leading into a competition. Don’t expect to remember it all.


See more articles & videos like this in the Weightlifting Competition Performance collection.

Craig
Awesome article! this answered all my questions.