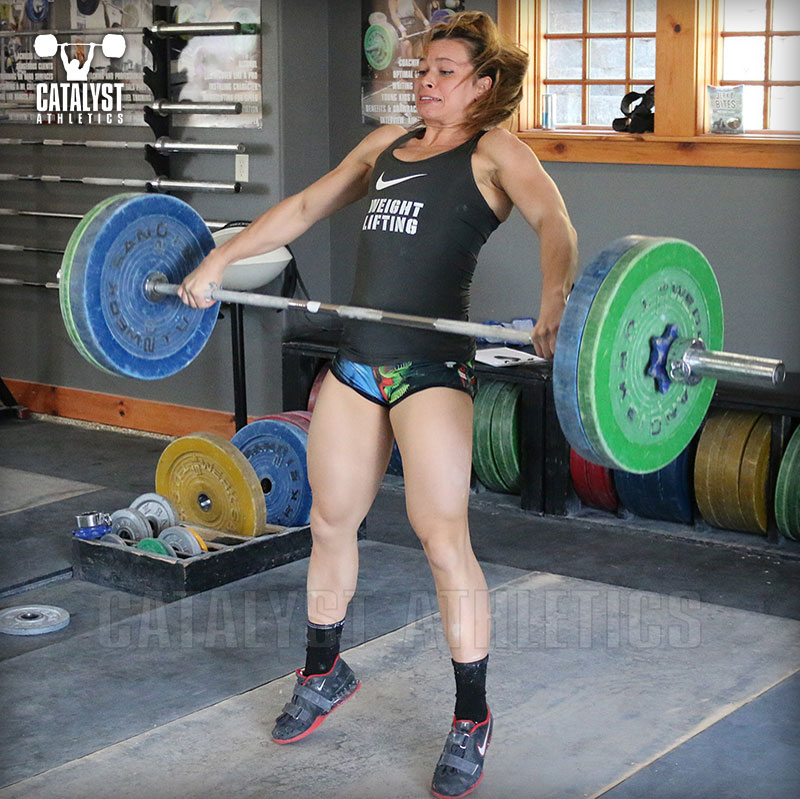 Whatever the situation, you want to lift like an animal on that platform, correct? You want to compete successfully and thrill the crowd. I’ve known thousands of weightlifters throughout my career, and I’ve never met one who said, “You know Matt, my ultimate dream is to compete in a weightlifting meet and piss down my leg. Miss all my lifts, you know? I mean I really want to suck ass when I get out there.” Nope, never heard that.

Do you want to know one of the biggest factors that determines the quality of your performance? It’s your meet week training plan. The seven days prior to competition.

You spend weeks and months working your guts out to get ready for a competition, and that determines your overall state of readiness. However, the last seven days before the meet will have a huge impact on whether you lift like a stormtrooper or a schmuck. Unfortunately, I’ve seen plenty of situations where weightlifters competed poorly and then sat in the bar afterwards and said, “I don’t know what happened. I trained better than I’ve ever trained in my life for this meet.”

There are lots and lots of variables that could have caused those bad days, and I can’t cover all of them in a single article. But I’m telling you right now… meet week preparation is one of the big ones. So I’m going to give you a few general rules and principles that will hopefully keep you from looking like Jackass McIdiot when you take the stage for your upcoming competitions.

1. There’s nothing you can do to make yourself stronger in the last seven days before a meet, but there’s a hell of lot you can do to screw yourself up.

By the time you get to meet week, the hay is already in the barn. The hard work is over. Your level of preparation has been established during the weeks of gut-busting work you’ve put in, and you’ve got all the ammunition you’re gonna have. If you haven’t hit the big lifts in training you wanted to hit prior to this meet, you’re just going to have to live with that, because if you continue bombing away at those huge weights in the last seven days before competition, you’re most likely putting yourself in a position where you’re going to be overtrained and beat down on game day.

Last year, some guy I’m friends with on Facebook was getting ready for a big national meet, and he posted five or six videos of himself attempting lifetime PRs in training four or five days prior to competition, with comments like “Still working on my GAINZ!! Feeling ready!!” As you can probably guess, he underperformed at the meet. He totaled, but his lifts sucked. I think it was a combination of poor meet week training and the weightlifting gods punishing him for using the word GAINZ. If you’re an Olympic lifter and you use that word, you’re lost in the darkness. Somebody needs to rescue your soul before you cross any of the final lines, like wearing a hat when you snatch.

Listen, I’ve played around with continuing hard training up to a few days before competition, and I paid the price. You might get away with it, but there’s a very good chance you won’t. I generally think there are a lot of lifters out there who do too much work during meet week. That’s not a blanket statement that applies to the entire sport, and I’m not judging anybody specifically. I’m making an observation based on almost 30 years in the game. Take it for what it’s worth.

2. If you’ve trained the right way, you SHOULD need a light week before a meet

You have to work very hard if you want to be a great weightlifter. And when you’re getting ready for a meet, those last few heavy training weeks are probably going to be pretty rough. If you’ve busted your ass at the necessary level, that light tapering week prior to competition should be like a cold glass of ice water after you’ve been crawling through a hot desert.

It’s hard to describe how you want to feel prior to meet week. You should feel tired, like you’ve been put through hell, but not to the point where you’re completely annihilated. It should be a state where you’re fatigued, and maybe a little banged up, but not excessively so. There should still be a feeling where you know you’re strong and ready… you just need a little rest. Because the whole goal of meet week is to show up at the meet, start your warmups, and say to yourself, “Holy crap, I haven’t felt this good in weeks!” If you train your ass off and then get the right amount of rest in the final seven days, that’s exactly what should happen. You wind up in the warmup room with a barbell that feels almost too light. It creates one hell of a psychological boost when this happens, and a psychological boost is what you want when you’re walking into the fight.

There are several ways to taper for a meet. And like all things in weightlifting, there’s more than one plan that can be effective. Let me give you the one I’ve been following for most of my weightlifting career. Here’s the meet week training plan I personally use, and also use for all my lifters:

Monday
Wednesday
ALL OTHER DAYS
*You could also do these workouts on Tuesday/Thursday if you want.

I need to give credit where it’s due. This is the meet week preparation plan I learned when I trained for the Calpian Weightlifting Club, coached by John Thrush. John invented this approach, and our whole club used it for several years. I’ve done this for every meet I’ve competed in since I started with Calpians in 1993. And as I said, all my lifters do this as well. It might not look like much, but it works. Our team’s track record in competition speaks for itself. I know some coaches like to have their lifters train the day before competition, and that’s fine if the athlete is adjusted and conditioned to do that. We simply had a different approach, and it worked like a charm for lots of really successful lifters… for a very long time. You can use it yourself, or not. It’s just an option for your toolbox, and you didn’t have to pay for it.

When you’re getting ready for a meet, think with your brain… not your tattoos. Backing off just the right amount might be your ticket to the best days of your life. It sure as hell was for me.


5 Comments
Craig
Hey Matt, great advice in this article. I've been lifting consistently for about 5 months now and had my first meet 2 weeks ago. I felt realitivly good going into it but one thing my coach had me do is find my openers the week of the meet. I failed a few times at what I wanted to open up with on snatch so we went with a lower number. My question is when should you figure out your openers? What process do you use with your athletes? Thanks so much for your advice.
Matt Foreman
Hey Craig,
I think figuring out a lifter's openers is something that happens throughout the last month of training prior to the meet. It shouldn't be decided in one workout. The coach has to look at the weights the athlete has been able to consistently handle with no misses, and then you have to look at goals/PR weights. For example, let's say you have a lifter who has a PR snatch of 80 kg and has trained really well. Everything in the mid-high 70s has been really consistent and easy, and the coach thinks the athlete is ready for a new PR at the meet. I would go with this general plan:
3rd attempt- new PR (82 maybe)
2nd attempt- approximately the same as previous PR (79-80)
1st attempt- 3-5 kg below PR, a weight the athlete has consistently made with no misses in training (75-77)

That's generally how I do it, and it usually works really well.

Brian Hagmeier
Matt, Would I be correct in assuming the template plan under number 3 would be written for your athletes if their meet were on a Saturday?
Thank You, Brian
Matt Foreman
Hey Brian,
Yes, it would be for a Saturday meet. If the meet is on Sunday, I would do the workouts Tues/Thurs.