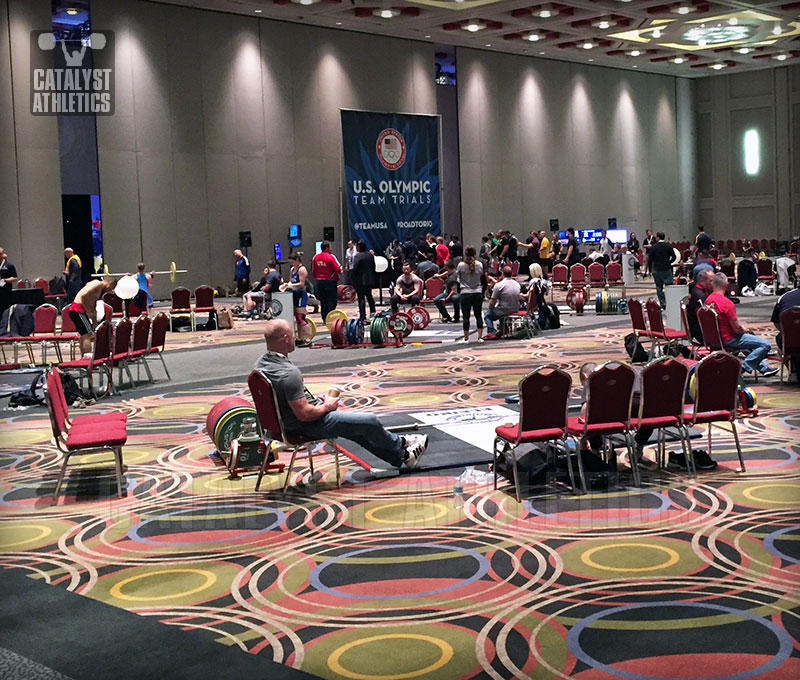 As most of you know, the women’s 2016 US Olympic Trials were held two weeks ago.

I was there, and I thought you might like to hear about it. Obviously many of you watched it on the webcast, but it’s hard to understand what it’s really like at the Olympic Trials unless you’re there… particularly if you’re in the warm-up room during the competition.

This was the 3rd Olympic Trials I’ve been a part of. In 2000, I was there in New Orleans helping my coach (AKA loading weights in the warmup room) while one of my teammates competed. In 2004, I competed in it myself in St. Joseph. And in 2016, I was helping Greg and Aimee with coaching the Catalyst Athletics team in Salt Lake City. Specifically, I was helping Aimee count attempts for the one and only Jessica Lucero.

Let me give you a list of things you may or may not know about the Olympic Trials:

1. The intensity in the warmup room is beyond description When I was 17 years old, I was talking to coach Bob Morris about what it was like at the Trials, because he had coached there before. He told me, “The tension at the Olympic Trials is so thick, you could cut it with a knife.” I’ve never forgotten that comment, and it’s absolutely true.

When you’re backstage at the Trials, people don’t talk to each other much. They don’t make eye contact much. Everybody knows what’s on the line, and it hovers around the room like a fat lead cloud. Every athlete in that room has paid unimaginable prices and committed years of hard work and pain for this moment. This is their big shot at the title. And if they flinch, somebody else is going to take it, and then they have to wait four years of their lives for another chance. Trust me, you’ll see better camaraderie in divorce court than you’ll see in the warmup room at the Olympic Trials. It’s very prickly back there.

2. Everybody knows exactly what the battlefield looks like In the days following the 2016 Trials, there were several articles posted online trying to explain to the public why Mattie Rogers and Jessica Lucero weren’t on the Olympic Team. The selection process for determining who goes to Rio isn’t simple, and it’s a little hard to understand for the observer or fan.

But in the warmup room, every coach and athlete knows exactly what they have to do, what the rules are, how much they have to lift, who their closest threats are, etc. The coaches have done PhD-level homework to prepare for this meet. They have notebooks with the exact percentages and current standings of every other athlete in the room. When an athlete makes or misses an attempt on the competition platform, every coach in the warmup room goes to work figuring out how those makes and misses affect them and their lifters, and how the rankings can change depending on every lift. It’s a lot like watching NFL football coaches calling plays during the Super Bowl. One little mistake can destroy a lifetime of training and preparation, so you better believe everybody shows up with their ducks in a row.

3. There are no weak links If you’re looking for technique problems or mental head cases, you won’t find them at this meet. Every lifter in the room has won championships, broken records, and spent a lifetime sharpening up their skills… in addition to the insane levels of athletic ability they were obviously born with. You hear stories about prison yards, where tough jailbirds stroll around and look for soft rookie inmates they can prey on. At the Olympic Trials, it’s not like that. It’s a room full of alphas, and you’d have to be crazy to step out of line back there.

It’s a room full of alphas, and you’d have to be crazy to step out of line back there.

Everybody is strong. Everybody is fast. Everybody has fantastic movement. Everybody has that caged animal look in their eyes. You can tell they’re all managing fear. That’s part of it. I’ve competed in this meet myself, so I can guarantee you there’s at least some level of fear in your mind when you’re in the fight. But by the time you make it into this warmup room, you’ve figured out a lot of things about how to control it. It’s too bad they don’t let fans see what it’s like backstage, because it leaves quite a dent in your brain.

Imagine the mental strength it takes to do what Jessica Lucero did. She missed her opening snatch with 91 kg. Then we jumped her to 93 for her second attempt (new American record) because she had to do that weight to have any prayer of making the team, and she missed it as well. Now she was in a position where she had one attempt left. If she made it, she broke the US record and still had a shot at the Olympics. If she missed, she bombed out… and everything was all over. My friends, that was a nasty couple of minutes while we were waiting for her name to get called. So she got on that platform and nailed the lift, and it was probably one of the most thrilling weightlifting competition attempts I’ve ever been a part of. Uncommon mental toughness.

4. You see some very sad and very happy people A few minutes after the competition was over, I talked to Morghan King. It was a fun conversation because you could feel the happiness radiating off her face like sunlight. She had just made the Olympic Team. It’s nice to chat with somebody at a moment like that.

And then there’s the other side… When the competition was over and the announcer called the three Olympians up to the stage to receive their honors, all the other gals had to stay in the back room and watch. I’m telling you, it wasn’t much fun to see the looks on some of those faces, especially the ones who were close to making the team and came up just short.

But here’s the thing…

Regardless of who makes the Olympic Team, the rest of your career will always be different (better) after you’ve competed in this meet. Not many weightlifters get to do it. Even if it becomes one of the most heartbreaking moments of your life, you still walk away a better athlete, and a better person. The girls who didn’t make the team will be tougher now, forever. The disappointment will harden them up, and that hardness will carry them through a lot of tough times in life.

I’ll never forget it. I know that for sure.


4 Comments
Debbie Millet
Great insight and write up.
Lifty McLifterson
Although I'm a fan of your usual sarcasm. This article gave me chills. Great job, Matt.
Frank
I could not resist commenting. Exceptionally well written! http://www.yahoo.net
Debby Collins
wonderful and quite technical article. You are doing a great work for the benefits of weightlifting sports. Keep up the good work.