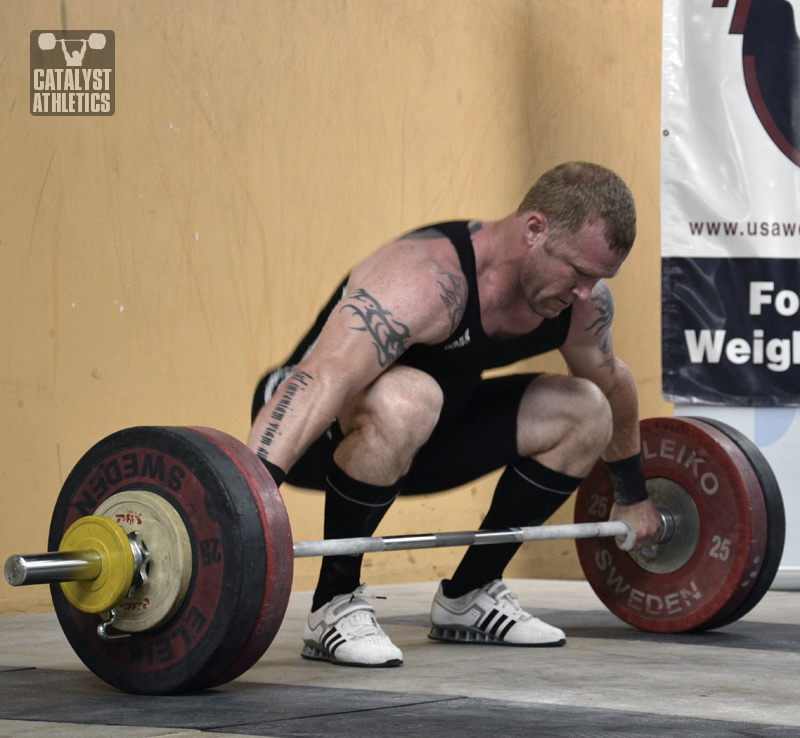 For the next 4-week block, have fun and pick out some new lifts, like off the blocks, or the hang for doubles, maybe snatch pull + snatch for 10 sets… Keep it fun, but use those 10 sets to get in some good work at 75% and up, then 7 sets week 2, then 4 sets week 3, adding weight every week.
Some disclaimers about this program
This thing has no business being in a program anywhere near a meet, if you are serious about that meet. There is no peak or test day. Look at this as “summer break”. You will go back to school feeling better about yourself and have that look of being jacked and relaxed, but you sure as hell aren’t ready for finals. Like I said earlier, this needs to be scheduled away from a meet you care about. I honestly believe 1-2 cycles of this would be an excellent way to get ready for one of Greg’s competition prep cycles.
If your technique sucks, 10 doubles might not be the answer to your problems. It might smooth out your technique if you have someone helping you, or it very well could hammer in some really bad habits.
Don’t neglect the squats. There aren’t any weights on them, but you need to push them.
Abs, back (I mean lower back) and mobility work. You still need them.
You need to ATTACK every set and every lift. Ten sets can get boring, so you need to think of it as a 10-round fight and you’re trying to knock this thing out every round. Then you have some squats or pulls, and then it’s time to get the pump on. I mean seriously—you get to snatch and walk out of the gym with a bicep pump in the same day? You’re welcome.
Everyday has to have an Olympic lift in it or at least a variant. Two reasons: this isn’t T-Nation, and Adidas FINALLY released those sweet white shoes. I will be damned if I am not wearing those in the gym even if I am doing curls.
Food and recovery: You are going to be hungry, I promise you that. Have food ready to throw down your throat as soon as you finish. I left the gym the other day and forgot food. The people at Carl’s Jr. appreciated that bad decision. Sleep and do all that other awful crap that goes along with being diligent in recovery like contrast showers, etc.
This is supposed to be a fun and small break from what you’re currently doing. Over the years, the term functional has been thrown around a lot by “experts” when it comes to lifting weights. They have told people that curls, etc. are the worst thing in the world you can do. Yeah that’s all cool, and I notice those guys are the same ones who have who arms that are functional for fishing keys out of locked cars through the window. Functional fitness to me is the ability to carry my refrigerator up and down a few flights of stairs—anything else really isn’t functional. I’ve been in some shitty scenarios in my life, and I have never thought, “Damn, I wish I had done more wall balls and burpees.” In my opinion, there are two real reasons to be in the gym: adding kilos to your total, or trying to look good in a T-shirt. This program should at least help one of those out.

Matt Foreman
GET TO THE CHOPPA!!!
Paul
Jeez look at Monday! that is a sweet sweet day in the gym
Jonathan D
Matt beat me to it.
Mike
Are the doubles without dropping bar on snatches and cleans or can you drop and do second rep?

Mike Gray
The bar is reset before the next lift as it always should be...
Joe
What's the Roadhouse Complex? Never heard of it.
Ta,
Steve Pan
Roadhouse Complex is DB Curl + DB Press.
Joe
Thanks, Steve.
Feel like Google should have been more use answering that :/
It wasn't.
Steve
I'm training for powerlifting at the moment and feel like I am starting to plateau/burn out hitting my current program. I have always loved hitting up olympic lifts; especially for speed training, but my current system doesn't allow much space for it. Do you feel the predator program would work well as a refreshing influx of different exercises outside of the big 3? What kind of carry-over could I expect from the program? and what kind of lifts could I substitute in to make it more powerlifting-certric. I'm not currently preparing for a meet so I have lots of time to play around with other training methods. Suggestions?

Thanks for the program, exactly what I'm looking for right now. Any recommendations regarding when/if one can do some HIIT-work to maintain conditioning?
Kellen
I feel like you took sever thoughts from my own fitness/lifting philosophy and put em on paper. Love it. Will definitely be trying this program out!
Perry
This is EXACTLY what I've been looking for, time to get my swole on! Thanks Mike!
Joseph
Quit my PhD 7 months ago and moved to a new country, inconsistent/nonexistent training has lost me all kind of gainz. Now I work 63 hours a week and I've been struggling to train 5 days a week like I used to. I was unsure about the essence of this program but goddamn I just did my first "Monday" session last night; 10 doubles felt great and high volume squats are foreign but delicious. I don't think I've chased a pump in like four years but oh boy I can tell i'm gonna have me some fun!
Francisco Martins
OMG this is só damn cool...i was feeling bored but after this article and doing day 1 hole s#@t felt soooo goooodddd.
Thank you.
Wade Millward
If you need me to list bicep exercises, I don’t like you as a person. - You are my favorite. Gonna go get swoll now.
Man chi Li
For example, 75% power snatch 3x3, is the 75% calculated off my snatch or my power snatch?
power snatch