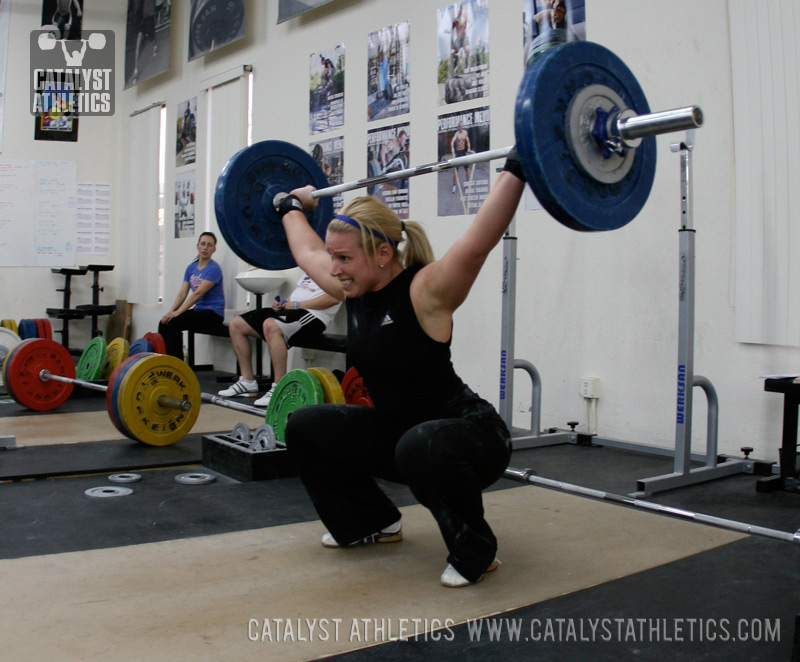 A lot of you guys are Performance Menu subscribers, right? For those of you who are, you might have noticed that we’ve been running a special section in the magazine for the past few issues.

About eight months ago, I was cleaning out some old boxes in my garage and I found my training journal from 1993. This was when I was twenty-one and training with the Calpian weightlifting club in Washington. For over a year, I literally wrote down every lift, set, and rep I did in training. Absolutely nothing was left out. Greg and I thought it would be an interesting way for people to study program design because the training method we were using with the Calpians made us one of the top teams in the United States. We’ve been publishing the program in sections, about six weeks per issue.

I thought I would use this blog post to show you what a typical week of training looked like for our club during this time period. Everybody in our gym was using the same program, so this was the basic workout structure for all of our team members. Most of the lifters in our club were national-international level competitors and had been training on this same program for several years.

This is what I did in training during the week of 9/20/93, and here are some notes to make it easier to read:
- Every lift I did in my workouts is recorded here, all warm-up sets included.
- Everything is listed in kilograms.
- I write sets and reps as follows: 5x3 means five sets of three repetitions, 100x2 means 100 kilos for a double (a set of two reps), 2x8 means two sets of eight reps, etc.
- All missed attempts are recorded as well.

As I said, this was a typical week for us. If you look at any of the other training weeks we did throughout the year, they would look very similar to this in terms of volume, order of exercises, training days, etc. Our program was pretty rigid, not a lot of variety.

You can study this program in a variety of ways. The best thing to do would be to analyze the whole training year so you can see how we peaked for big competitions, when our deloading weeks were, what our overall progression schedule was, etc. If you haven’t been reading Performance Menu, you’ll have to get some back issues to get caught up. Next month’s issue will be the fifth installment (out of seven total), so we’ve published most of it already.

I decided to put this stuff out to the public because program design is probably the biggest thing I get asked about by other lifters and coaches. After technique analysis, programming is the most popular topic in weightlifting. Absolutely everybody is trying to find the right approach. This is just one of many training methods you can examine, but I can safely say that this one had a higher record of success than most others. We won the US National Team Championship in 2000 by training like this, so it’s definitely worth your consideration.

If you have any questions about any of this, get in touch with me on Facebook or in comments to this post.

Marc Agnello
I am interested in purchasing the back issues or as a compilation of articles through this site. Can you tell me what issues of the magazine I should purchase? Thanks
Matt Foreman
Sorry, I probably should have included that info in my post. The issues you want are 86, 87, 88, 89, and 90. That will bring you current. Thanks for the interest Marc.
Jose Torres
Any advice for a nagging dull ache in the left shoulder after performing snatches after a crossfit workout. 2 workouts with some practice twice in this past month were done including the first one mentioned. Since then I have this discomfort especially after one rep at a weight of 135 lb in a set of 3 reps. My one rep max had been an ugly 175 lbs the week before. Did I slightly sprain my shoulder? I still consider myself a novice in the olympic lifts. Back to working out after more than 10 yr layoff as a couch potato. Working out for past 6 months. Just trying to prevent further injury. Thank you for any advice you can provide.
Matt Foreman
I can't really know what's going on with your shoulder. But you said that you did a 175 lb snatch and it was "ugly." Anytime a snatch is done with max weights and it's ugly, there's a risk of tweaking something. If your shoulder feels like you sprained it, you probably did. My advice would just be the normal procedure after a minor injury- back off for a while, ice, then ice and stretch, then do light exercises to get pain free range of motion back, and then start doing snatch workouts again but with light weights to get your technique consistent.
Jose Dionisio Torres, Jr.
Thank you Coach Matt Foreman. It agree with the sprain diagnosis. My left shoulder pain is mostly when I fully extend my left arm in the snatch position. Any lifts other than the snatch I should try to avoid for the short term.
Matt Foreman
I would stay away from anything that hurts, basically. If you let it rest and recover, it probably won't take long before you're back 100%.
Louwrens Fourie
Good Day. i am not that familiar with to much weightlifting programming but want to learn more, Currently running a CrossFit Box, but have a PT session with a guy ones a week for now and i want to improve his snatch. what would you recommend for me to use with him...?? the first 2 sessions i just focused on His starting positions and pausing at 3 different positions to improve that and get stronger, we are also focusing on getting him more mobile he is very stiff UPPER body.... working a lot on overhead positions and thoracic spine mobility, also a sloppy shoulder dropping forward...... what do we need to do,,,??