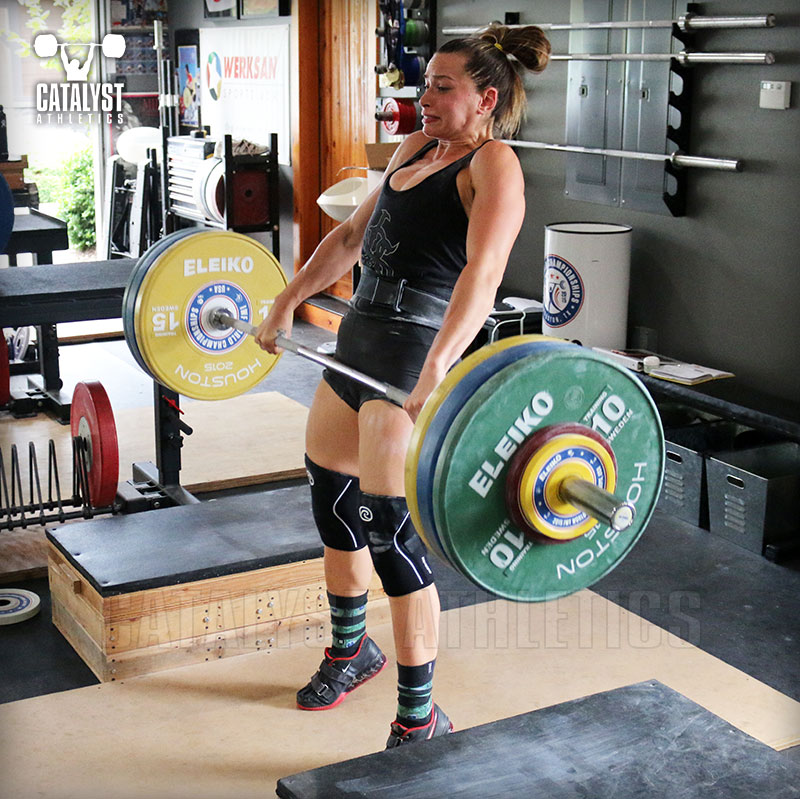 The situation is a workout where I’m coaching a beginner/intermediate lifter I’ve been working with for a while. The athlete is getting ready to start doing some snatches.

Lifter: “Coach, my snatch technique is almost right. I can feel it. I know we’ve been trying to get my form locked in, and I can tell I’m just about there.”

Me: “Absolutely. You’ve really been coming along. Let’s get to work.”

Then the workout starts. The lifter progresses through multiple sets of snatches while I give cues and instructions. At some point, it happens! The snatches are right on the money. All the technical skills we’ve been trying to build have fallen into place. We can’t say the technique is perfect, but we can definitely say it’s correct.

Me: “You did! That’s exactly what I’ve been trying to get you to do!”

Yeah, the 1,000 rep problem. Let me explain what I’m talking about, although many of you already see where this is going. The 1,000 rep problem is the situation that exists when a lifter has finally found the correct technique of the SN or C&J. After tons of work and coaching, they’ve done it right. But now they have to do it right another 1,000 times to memorize that correct movement.

We’re talking about things like muscle memory, nervous system memorization of a specific movement, motor learning, that kind of stuff. Some people think of this as learning correct technique and then making it a habit. I don’t really see it as a habit. I think of it as learning correct technique and then continuing to do it right until you basically don’t know how to do it wrong anymore. Habits are just recurring behaviors, like peeing in the shower. You can stop doing those things any time you want. I’m talking about a more fanatical level of performance, where your body just instinctively executes a certain movement because that’s all it knows how to do.

I think you have to do a massive number of correct lifts before you’ve got that kind of muscle memory. I picked 1,000 for the name of this concept because it emphasizes long-term development and it sounds cool. I know there’s no set-in-stone number. I’m sure there are some wanna-be intellectuals out there who claim to have some documented proof from a book that specifies an exact number. But the body is a mystery in many ways, and there are a lot of variables that come into play when an individual is learning an athletic skill.

Now, here are a few extra notes about this:

- You only get the 1,000 rep problem after you’ve done it right for the first time. Your first correct rep was #1. Many of you haven’t even hit that one yet.

- Crappy lifts don’t count towards your accumulated total. So if you’ve done 287 correct lifts and then you have a workout where your technique is totally whacked and you wind up doing thirty sloppy snatches, you’re still at 287 at the end of the day.

- If you’ve never done it correctly and you’re content with that because your only goal is lifting more than everybody in your CrossFit, that’s cool. Weightlifting needs a bottom half too.

- And speaking of CrossFit… Look, everybody knows I love CrossFit. I’ve been very public about that. But let’s be honest about something. If you’re trying to master the OLifts and you regularly bounce back and forth between solid OL technique and disgusting mutant CrossFit power snatch technique for your WODs, it’s gonna be extremely tough for you to build the kind of skill we’re talking about.

When you see somebody who has clearly made it way past 1,000…a true master…it’s a hell of a thing to watch. The ease, speed, and consistency of their movements are hard to comprehend. When people see high-level weightlifters, the first thing they notice is how muscular they are. But the second thing they notice is how fast they are. Part of the reason these lifters are so quick is the ungodly amount of fast-twitch muscle fiber they have. The other part is the massive number of skilled reps they’ve accumulated.

When you’re a lifter at this level, you can feel the tiniest little imperfections in your technique. You’ll do two cleans and a bystander will think they looked exactly the same, but you can tell there was a difference between them.

Where do you think you’re at in this whole spectrum? Are you still searching for correct rep #1? Remember, I’m not necessarily talking about being perfect. I’m just talking about being correct. There’s a difference between the two. “Perfect” is something that takes a long career and a lot of natural talent to achieve. It’s best to see it as a lifetime goal. “Correct” is something that requires a lot of work and ability too, but it’s a different level than perfect. Most people who have good athletic ability and quality coaching can learn to do the lift correctly.

Once you’ve done it right, all you have to do is build up a mountain of reps. How long does it take to do 1,000 reps the right way? A long time, brothers and sisters. A very long time. You don’t get to have immediate success in this sport. That’s one of the reasons why a lot of people don’t do it. If you want to be great at this, you have to be willing to put in a lot of work. But you also have to be willing to stand in line and wait for your turn to sit at the big table.

If the long road is too much for you, you can always quit. As Judge Smails said in Caddyshack, “The world needs ditch diggers too.” But you won't do that. I know you won't.

Aaron
1000 reps doesn't even seem like that many. If I do 10 correct snatches 3x a week, then it will take me 33 weeks, or about 8 months.
Mauricio L.
I'd say it's more like 1000 correct snatches @ > 90%, which would be hard (though perhaps possible) to get 10 total reps of per week, in which case you're looking at about 2-3+ years at least, which is closer to what we actually see with talented athletes who start out with good coaching and strength base. Of course potentially much longer if either of those last two items are not the case, especially if crap technique in ingrained.
Matt Foreman
As I said in the post, the number 1,000 isn't intended to be set in stone. There are two main points I was trying to make here:

Katie
I think I've hit #1 once... still waiting for #2. (Still talking about weightlifting.)
Kelly
Are we talking about starting with the barbell and slowly adding weight with correct reps? Keeping it light?
Matt Foreman
Kelly,
Yeah, that's exactly what we're talking about. That's how you build great technique, in my opinion.

Kelly
Thanks Matt :). We are all so quick to PR PR PR. No wonder why everyone gets hurt! I def Need to take weight off and focus on tech. I enjoy watching your daily training. The women are so tiny yet lift so beautifully. Must have amazing coaches :)
Matt Foreman
Thanks Kelly, and I agree with your ideas about your lifting. But the training videos you see are all from Greg Everett and Catalyst. All the credit goes to him and the Catalyst team. Sometimes people think he and I are the same person, probably because we're both so handsome.
Erok
Being a musician, this makes perfect sense to me. I need to play a song 1000 times correctly before I'm good at it.
Joe Devlin
Thanks Matt,
I just emailed this to members of my team. You explain very clearly many of the things I've been trying to communicate to them but you put it in a very Matt Foreman way.
PatG
You know how they say practice makes perfect? Well that's not quite right - perfect practice makes perfect. As my coach often says "I hope you're not practicing how to fail?"

I look forward to hitting that 1000th perfect rep
Dan Feavel
Still on the hunt for rep #1....

DF (EVCF)
Caroline
LOVE this article as an amateur athlete and professional trombonist - it rings true across all areas. I want to disagree with the Crossfit thing, but as a Crossfitter myself, I see bad form CONSTANTLY - even from the people who should know better. I just make better choices! Ha. My OL has to be the purdiest, even if I'm done last ^_^
jonny logan
Really great article. Thanks
JB
I love your articles!