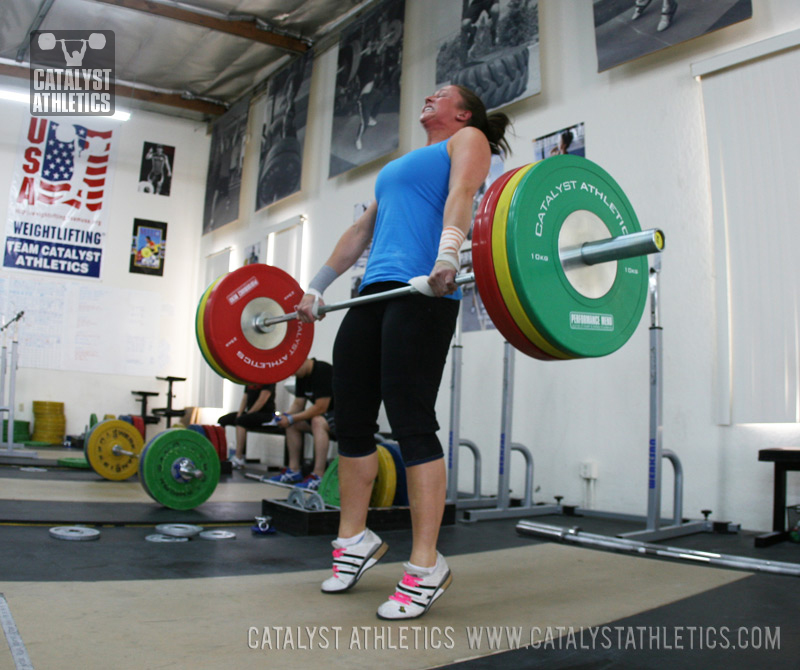 Has it ever occurred to you that weightlifting is a monkey-see-monkey-do activity? I’ve thought a lot about this over the years. If there is one thing I’ve become absolutely convinced of, it’s that most athletes learn primarily by imitation. When people are trying a new athletic skill, like a snatch or a clean, the best tool for their learning is to watch that skill being performed correctly by somebody else, and then basically mimic what they’ve seen with their own bodies. Some verbal coaching is very important and necessary, but the most valuable part of the process is when the athlete gets to see the skill being executed. Once they’ve seen it, they replicate what they saw.

I’ll never forget a day when I was teaching the power clean to a group of basketball players a long time ago. I had six or seven of them grouped around a platform and I was going through a short explanation of how to do the lift. They stood there and listened while I told them about hand placement, foot placement, the pulling movement, etc. After I finished and told them that it was their turn to give it a try, they looked at me like I had just given them the instructions in Arabic. We’re talking blank stares, jack. Then, one of them raised his hand and said, “Can you just do it a few times so we can see what it’s supposed to look like?” I said okay, then I put sixty kilos on a bar and did four or five power cleans. After I finished, they all nodded and said, “Okay, we got it.” Then they started taking turns doing their own cleans, and their technique wasn’t too shabby. I had to give them a lot of instructions to clean up mistakes, like “keep your back flat” and “accelerate when the bar passes your knees.” The combination of visual and auditory coaching was what they needed to get their form solidified.

The absolute best situation a new lifter can have is to train in a gym with some experienced athletes who have mastered the technique of the lifts. Along with the input they’re getting from their coach, they get to watch proficient training partners over and over, day after day. While they watch, the correct patterns of the lifts are being tattooed on their brains. They’re memorizing the movements and positions. And if they have some athletic ability and kinesthetic awareness, they’ll be able to move their bodies in the same manner. Many of you who are reading this can probably think about the early times of your own lifting, when you watched some stud nailing big lifts with sharp, speedy technique. You might not have known it, but you were learning every time you saw these lifts.

If you’re a coach, you need to expose your athletes to expert technique. Hopefully, you’ve got at least one or two lifters in your gym who are in the advanced stages and lifting big weights. If you don’t have anybody in your club who fits this description, then you have to figure out another way for your athletes to see what perfection looks like. Taking trips to other gyms where there are some high-level weightlifters is a great idea. It’s exciting to work out in new spots, and most people pick up all kinds of ideas and tips just from being around unfamiliar faces. The freshness of the whole thing seems to make everybody more perceptive.

If you live in BFE and it’s simply not possible to travel and train in different locations, then buy a freaking computer and spend lots of time on YouTube. Video work, in my opinion, is essential for new lifters. When I started lifting, I was constantly raiding my coach’s VHS collection of old world and Olympic championships. I probably watched an hour of lifting every day for the first few years of my career, obsessively studying the best technique in the world. Guys like Nicu Vlad, Stefan Botev, Anatoly Khrapaty, Blagoi Blagoev…these are the guys I patterned myself after.

Don’t misunderstand all of this. I’m not saying that you should coach technique by just having your athletes watch other lifters and nothing else. There’s a lot of communication and instruction that needs to happen too, and often you have to actually use your hands to put the lifter’s body where it needs to be. There are multiple pieces of the puzzle when it comes to building an efficient weightlifter. But never forget this: if they can’t see what it’s supposed to look like, it’ll be much harder to grasp what you’re trying to tell them.


18 Comments
Greg Everett
This is a big reason that I play IronMind videos in the gym during training all the time. (and also why I whisper to certain new lifters to not watch certain other lifters when they lift).
Hugh Gilmore
Just curious, have either of you two heard of mirror neuron hypothesis?

As essentially the monkey see monkey do is actually a real phenomenon in skill learning.

Jen
Its strange but just today I was watching videos from this site and thinking how much it helps be to watch the bar path and foot work on the videos here. I think one of the most important things about watching videos is to make sure they are of a high skill level, I hate seeing videos of poor movement and skill, it's poison to let those visions into your head. I just want watch videos from places that are not specialists in Oly lifts. Thanks for this!
Spencer Mackay
This is bang on. I think one of the best pieces of video you can watch as a developing lifter is warm-up room/training hall footage from any major championships.
Greg Everett
Hugh -

I haven't heard of it.

Matt Foreman
Spencer, I totally agree about training hall videos. They're my favorite. I think it's important to see how the best lifters move with 50 kilos, 70, 90 etc., not just their world record attempts on the platform. Plus, it's great to watch the general attitude and mentality you see from the best in the world when they're training.
Ben O'Grady
Does anyone have or use wall length mirrors? None of the CrossFit gyms I go to have them...in fact, CF gyms in general don't have mirrors ever. But I go to a regular globogym with tons of mirrors and practice my Oly lift technique and it helps a TON. It's real-time feedback and easier than video. Food for thought.
Joc
See Greg, that's why it took so long to break me of my head whipping habit- I just watched Pyrros do it so many times I couldn't help myself.
Macvill
Ben O'Grady, in the book Starting Strength by M. Rippetoe (who gives lectures at Crossfit facilities), he advises not to use mirrors, but to favor developing a kinesthetic sense of movement. That is, to learn how the body feels how it is done. I believe Crossfit gyms follow this advice. You are lucky you can go to many CF gyms; I'm in a country were there are no CF gyms at all, so I have to rely on the internet for coaching.
Hugh Gilmore
google mirror neuron and read the wiki on it, (it wouldn't let me put the link in)

Essentially with beginners its better than visualisation, for skill learning to observe a correct movement than try to work it out on there own, not that it isn't kind of obvious, but research shows if you watch someone do it you replicate better... best layman example is when you mimic someone it takes less time to respond when repeating what they are saying than to recreate what they say with different words. Just felt the need to comment when you guys talk about stuff that is related to sport psychology its dam interesting.

(To clarify mirror neuron has nothing to do with mirrors in gyms.)

Keep up the good work Greg and Matt looking forward to the next articles.

Don't talk back. Go do your exercises.
Greg Everett
Ben/Macvill -

Generally I'm not a fan of mirrors, but I've seen video of Korean lifters using them to check positions, and I've been told by one of our lifters here, who trained as a weightlifter in the East German system that they used mirrors also. There is definitely a time and place - I wouldn't use them during the classic lifts, but during position work like halting DLs and similar, I can see their utility to allow a lifter to refine position without needing a coach to constantly supervise and cue (and if the lifter knows what he/she is supposed to do, responding to an image in a mirror is arguably easier and quicker than trying to do what a coach tells you).
Dan Meyer
A TED talk from V.S. Ramachandran (the phantom limb guy):
ted.com/talks/vs_ramachandran_the_neurons_that_shaped_civilization.html
Dan Meyer
Also, Z-Health talks a bit about mirror neurons.

I have my degree in film and a minor in cognitive neuroscience. Mirror neuron hypothesis is very real thing because of how are neurons(Messengers) electrically connect to our pre-built synapses(Message receivers). Or in layman's terms, if someone is already has some adapt kinestetic awareness (a.k.a. synapses) their bodies already know what to do, they just need to be turned "on." It's exactly like a light switch, the wiring is already there connecting point A to point B, you just need to flip the the switch to catalyze the electric current. Similarly, this is how some actors do new accents in a flash, by mimicking mouth patterns. It's also why you can't just learn a new language right away.

On the other hand, learning how to translate words into actions is a skill in and of itself. It's confusing to some athletes because quite simply, they don't have the brains to do it. I'm not calling those athletes stupid, it's just that they might not have the pre-built synapses to do it, BUT over time they will and can build new synapses/learn new skills. This actually happens chemically, which is why it always takes so long to learn something new. When your brain encounters something new, it adapts by chemically making a new synapse. It takes a long time and people go through a "Confusion" period. Then once that synapse is fully built, your brain can send neurons to it electrically. The brain gets smarter (not larger) because we have the potential to build unlimited synapses.

Sorry for the impromptu neurology lesson everyone, but I thought people would like to know this stuff, because it's evidence that you really can do whatever your mind sets out to do...it just might take a very long time
Hugh Gilmore
Adam,

I believe the term your looking for is neuroplasticity as opposed to smarter, and yes you are correct. I too am skilled in the way of the Jedi , sorry I mean I have a Masters in Sport and Exercise Psychology with a large focus on motor cognition. Interestingly though while the research does support the existence of a mechanism, and heuristics and common sense would support the idea that this phenomenon exist, it cannot actually be proven in human subjects, as voxels (the unit of measurement in MRI) are 1) too big and 2) only measure bloodflow. (look up dead salmon study MRI)

Further more the method of functional equivalence through which it is supposed to work is under criticism.

"Neuroplasticity" that's the term I couldn't remember! Thank you for correcting me and for the referral to the Dead Salmon and "Macuga and Frey" info. I'll have to check it out.

Chris Wood
Cue plug for Catalyst lifting posters. Have all of them scattered throughout our weight room at the high school and use them constantly as a reviewing resource for beginners and advanced alike!