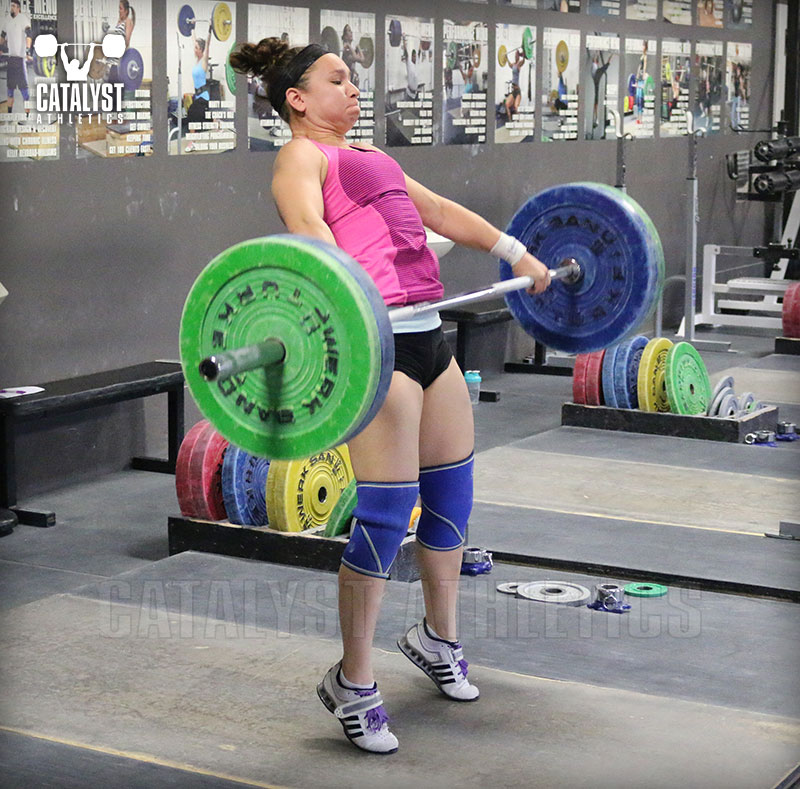 No funny business this time. We need to talk about technique. This one is gonna run a little long, but it’ll be worth it. Some of this is from an old PM article I wrote, along with a few changes.

We’re going to look at finishing the pull in the snatch and clean. More specifically, we’re going to do an analysis of the question “Should the lifter extend up on the toes or stay flat-footed at the top of the pull?” This is a confusing question for intermediate lifters who are in the process of building their own technique. Most athletes are smart enough to study the world’s best lifters as they’re trying to develop their personal lifting form. Anybody can get online these days and watch hours of World Championship footage where you can do slow-motion breakdowns of the best lifters on the planet. But this is where things can get puzzling, because not all world record holders use the same technique. Some of them extend high up on their toes at the top of their snatch/clean pull, and then others basically keep their feet almost completely flat on the floor all the way into the turnover phase. If you’re a newbie, you have to ask yourself, “Which way is the right one?”

First of all, let’s make sure we’re all clear that this is specifically analyzing the phase of the lift where the athlete is extended into the top position of the snatch or clean pull, where the upward pulling movement is hitting its completion and the lifter is on the verge of jumping down into the turnover phase. When this stage is reached, we can start to see some variations in movement between different lifters.

The first type of technique we’re going to examine is “toe-extension pulling” for lack of a better phrase. With this, the lifter drives and extends up onto the toes at the top of the pull. If you were to do a frame-by-frame video analysis of this technique and then pause the video when the lifter is at the absolute highest extension moment, the body position would somewhat resemble jumping off the ground. When athletes use toe-extension pulling, there will usually be an audible slapping sound as their feet hit the floor when they jump down into the bottom position. If you’re having trouble telling whether or not the athlete is using toe-extension pulling, this sound is often a dead giveaway. From a biomechanical standpoint, the basic idea behind toe-extension pulling is that the athlete will be able to lift the barbell to its highest possible point by stretching the body to its highest possible point. Maximum force is generated through driving up onto the toes, creating the longest extension line from the floor to the top of the athlete’s body.

Now, there’s another style of pull finishing that you’ll also see if you study world record holders long enough. Let’s call this second technique “flat-foot pulling.” Understanding what this technique looks like isn’t too complicated. It basically looks the way it sounds. Here, the athlete is finishing the pull, but hasn’t fully extended up onto the toes prior to turnover. Most of the athlete’s foot stays on the floor throughout the entire pull. With flat-foot pullers, you will likely still see a little rise from the heels at the moment of full extension. But it’s nothing like toe-extension pullers, and you won’t hear the stomping sound from the feet when they hit the bottom position either. Biomechanically, the reasoning behind flat-foot pulling is that the athlete will be able to continue generating force into the floor if they keep the surface area of their foot in contact with it. If you keep your feet on the floor, you can drive the body upwards harder. Without getting into scientific jargon, that’s about as simply as we can describe it.

Knowing that world record weights have been lifted using both toe-extension and flat-foot pulling, one of the obvious questions that pops up is, “Which technique is most common at the highest levels?”

If you study weightlifting long enough, you’ll see more toe-extension pullers at the top of the sport. Sometimes, you’ll see lifters who are extreme toe-pullers, like Zlatan Vanev from Bulgaria. If you want to see the ultimate example of what we’re talking about when we discuss toe-extension pulling, watch this guy. His explosiveness when he jumps his feet into the bottom position is faster and more violent than almost any other lifter you’ll ever see, with the exception of Iran’s Behdad Salimi. Salimi, who recently snatched a new world record of 214 kilos (471 pounds), basically defies physical laws of movement with the power and acceleration he generates into the barbell. He and Vanev are what I would call hardcore toe-extension pullers, but there are many other great lifters who use this technique with a more moderate level of foot movement. Soviet legend Alexander Kurlovich and women’s Olympic champ Svetlana Podobedova are pretty good models of this.

However, let’s not make the mistake of thinking that there aren’t some great flat-foot pullers in the sport. Xiaojun Lu from China is probably the best example of flat-foot pulling in the world. Lu uses a very slight toe-extension in the snatch, but his cleans are where you really see what flat-foot pulling looks like.

I’m a firm believer in toe-extension pulling, always have been and always will be. I’ve always felt like the only way I can really put some serious crank on my pull is by driving up to the tallest point I can get to in the pull before jumping into the receiving position with a good loud smack when my feet hit the platform. I’ve never tried to lift any other way, and it’s also how I teach the Olympic lifts to others. Now, there’s a delicate balance you have to hit when you’re teaching lifters to extend onto the toes and then jump their feet into the receiving position. You don’t want them to get excessive with it. I’ve worked with a few lifters who bring their feet too far off the floor during the turnover, almost to the point that it looks like a jump-tuck when they’re pulling themselves under the bar. You don’t want those feet too far in the air because that will cause a little hang-time moment in the turnover where the athlete is basically floating in space. That’s not good.

In my experience, I think athletes will find their own comfortable feel for the movement as they practice it. Some of them will have that dramatic extension/stomp-the-feet technique we see from Vanev, and some will have a more restrained version of the movement.

Flat-foot pulling? I’ve never taught it to anybody and I don’t know if I would want to try. There’s no denying that it can produce world-class results. I would never say otherwise because there’s evidence to prove it. From a coaching perspective, I would let an athlete use flat-foot pulling if that’s what they naturally grew into. Good athletes figure out how to use their bodies in the best way. I would let them do it if it looked right.

How do you know when it “looks right?” Experience, research, and more experience will answer the question. If you’re a competent coach, you’ll know when it looks right, just like you’ll know when it “feels right” as an athlete. But in either case, you have to put in the hours of learning and teaching. You must have a model of good technique that’s second nature to you, and you get this through analysis of the best.

There’s no one right way. Sometimes I get annoyed when I listen to philosophers, politicians, or religious leaders because it basically seems like most of them are saying, “Only I am right, and everybody else is wrong.” That just doesn’t work for me, because I believe there’s usually more than one solution to a problem. It’s a complex world. Your job is to find your own way, the one that’s right for you.

That's because it's heavier!

Duncan Weiszhaar
When looking at the olympic lifts for training power and RFD in athletes such as football players, would using the flat footed technique result in a befter training stimulis as they are able to transfer force to the through out the entire first and second pulls?
Greg Everett
Duncan -

How does not staying flat-footed prevent them from transfering force through the entire first and second pulls?

It's pretty typical, actually, but the goal is to stay flat-footed as long as you can in the pull.
Steve
I've noticed that my feet come a bit high off the floor and I'm in that floating state. Are there any coaching points to help eliminate this? Thank you!
Work on trying to get your feet conected with the ground as you turn the bar over. You want to try to lock out overhead as your feet hit the ground. Working on Tall Snatches and Snatch Balances where you focus on getting your feet to connect quickly after lifting them will help.