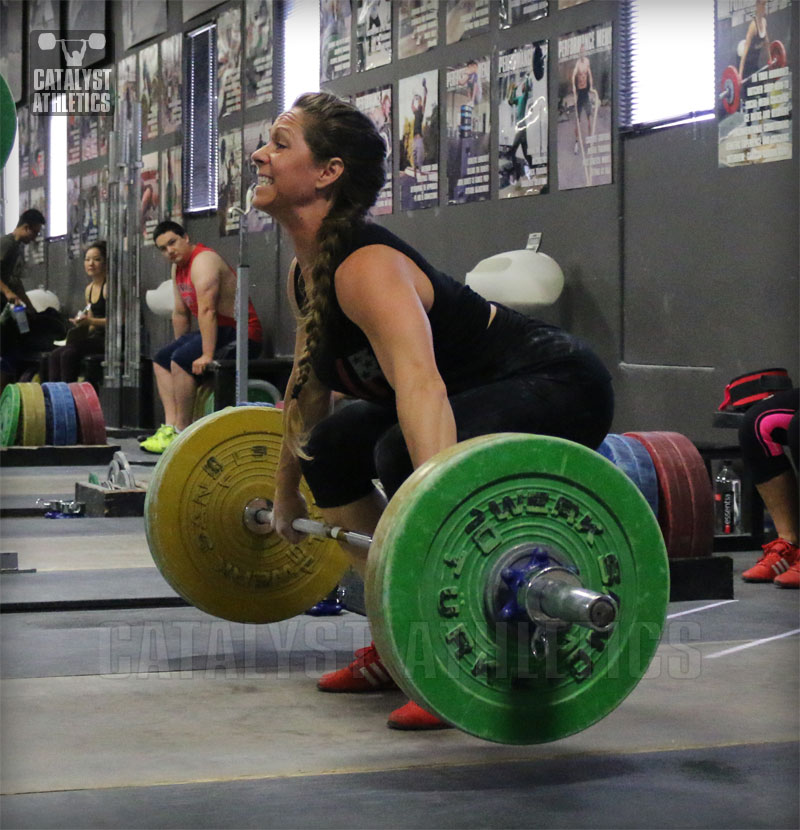 In the snatch and clean pull from the floor, the bar must move back slightly from its starting point on the platform. This is minimal horizontal movement, but very important to re-establish balance once the barbell and lifter become a single unit following the bar’s separation from the platform. Because the barbell will start over approximately the balls of the feet, and eventually needs to move closer to over the middle of the foot, this backward movement will cover the distance between the barbell’s starting point and the plane over the middle of the foot. How close the bar must be to over the middle of the foot will depend on how heavy it is relative to the lifter—the heavier the bar, the larger the percentage of the combined mass it represents, and as a consequence, the closer to above the middle of the foot it will need to be for the combined mass to be balanced over the foot.
There's another issue with regard to the idea of pushing the bar back, and that's the forward movement of the shoulders during the first pull. In the initial pull from the floor, the angle of the back will shift to some extent while the bar is moving backward, and the shoulders will move forward of the bar rather than being approximately above the bar where they start. How significantly the back angle shifts will depend on a few things.
First, it will depend on the lifter’s proportions and how they influence the starting position. That is, a longer-legged lifter will likely start the bar slightly farther forward over the foot compared to a shorter-legged lifter. This will typically mean a more significant shift in back angle naturally in the first pull. Next, the closer the angle of the lifter’s back in the starting position to the ultimate angle it will need to be as the bar is passing the knees, the less it will shift. Finally, the stronger the lifters legs are, the less the back angle will shift; conversely, longer-legged lifters who tend to have weaker legs comparatively and worse mechanics in the starting position for the knees will tend to shift more in the first pull.
If the bar is allowed to move where it wants, it will continue hanging straight down from the shoulders—meaning that as the shoulders move forward with the shifting back angle, it will move forward away from the lifter, and the actual distance will be greater than the distance the shoulders move, because the legs will simultaneously be moving backward as the knees extend.

This is the reason for the instruction to push the bar back toward the hips during the pull. However, it can be overdone. A lifter can bring the bar too far back relative to the feet, which can create at least two basic problems.

First, it shifts the combined lifter-barbell center of mass too far back, directing the lifter and barbell backward too much relative to vertical. Depending on the degree, this can mean a backward jump, which if small can be acceptable, but on a bigger scale, will cause a miss.
Second, with the bar contacting the body with the hips so far back relative to the feet, it gains excessive forward momentum as the hips extend in the second pull and push the bar with them, causing the bar to swing forward away from the lifter.
The key is to maintain immediate proximity of the bar and body throughout the pull until contact is made at the hip (snatch) or upper thigh (clean) by the bar and body coming together and meeting in the proper position over feet—not one traveling exclusively to the other. In other words, the body must move properly while the barbell shifts backward slightly from its starting position and then moves into an essentially vertical path once it reaches the middle of the foot. While the bar can’t be left too far forward and the hips allowed to reach for it, the barbell can’t be pushed all the way back to the hips before they have moved forward over the feet during the double knee bend.
Keep this in mind while doing your snatch and clean pulls in particular, as it’s easier to focus on this detail in a pull than during an actual lift. The proper movement trained in the pulls will carry over to the snatch and clean. As it gets better, more focus can be applied in the lifts themselves for the final minor adjustments. Always remember that pushing the bar back to the hips is a cue to be applied properly—not a description of a dramatic movement of the bar.

Andrew
Greg, what lifter would you say does a great example of this to watch? Someone of average lever lengths to get a general idea.
Nadezhda Evstyukhina