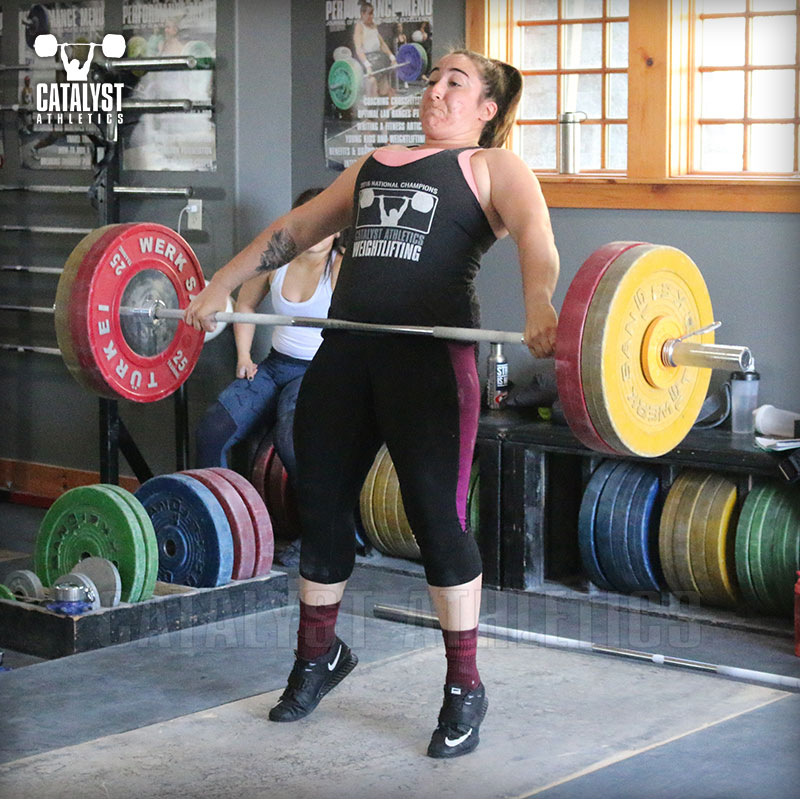 Matt Asks: It’s midnight and I can’t fall asleep because of the endless loop of mental snatch reps in my head. And it all crystallizes into this damning question, and it is driving me mad... do the hips come forward to meet the bar or are the shoulders coming back, bring the bar with them to the hips?

I can’t seem to get rid of two things: 1. The dreaded rainbow loop that the bar takes when too much horizontal movement of the hips is used to propel the bar forward and 2. It seems like my legs extend too much before the second pull... it looks like my hamstrings are double loaded like cocking a gun, before then beginning the second pull... almost as if my body (mind) thinks I need the elasticity to spring my hips forward to get the weight up with pure pelvic force.

Man any advice would be incredibly appreciated. Needless to say the process is what it’s all about and I love your content. I look forward to continuing to drink from your well of wise waters.

Greg Says: The answer to the first question is both. The hips do move forward significantly during the pull. Just picture where the hips are relative to the feet in your starting position (behind) and then where they are at the top of the pull (pretty directly above). The bar does move back from its starting position, but the distance it covers is much smaller than that of the hips.

That said, typically we focus on bringing the bar back rather than the hips forward for three reasons: First, you can’t lift without the hips coming forward; there’s no way around it, so it doesn’t have to be a conscious action. Second, if the bar is not moved back during the pull, it will pull you forward because it’s not actually balanced over the foot as you start, i.e. the bar moving vertically creates a system with a forward imbalance. Third, nearly invariably, a focus on bringing the hips to the bar results in a weak or short leg drive and the hips pushing too far through the bar.

Extending the knees too much too soon in the pull is usually the result of an excessive effort to keep your shoulders over the bar that results in moving them farther forward than they should be by extending the knees more without extending the hips commensurately, i.e. tipping over. This causes you to run out of knee extension way too early, which means you lose the ability to continue driving vertically with your legs—as a consequence, you have an extreme double knee bend in which your knees truly do re-bend rather than simply scooping forward with little change in flexion. This means more reduction in bar speed during this transition and a disruption to what should be continuous vertical drive with the legs, which influences the hip and bar interaction. In short, this means more horizontal force on the bar than should exist, causing your looping problem.

How to fix it? Start by fixing your pulling position and understanding how to properly stay over the bar—it’s staying over the bar, not moving over the bar. In other words, it’s more an issue of maintaining a position, not changing the position. If you keep your back angle and shoulder position approximately the same until the bar passes the knees, your shoulders will naturally be in front of the bar as they should be. Don’t make it more complicated than that.

Use snatch segment deadlifts or pulls with pauses right off the floor, at the knee, and at mid-thigh, focusing on maintaining the back angle and not over-extending the knees and leaning farther forward over the bar. You can turn these into segment snatch high-pulls with the last pause at the knee, giving you the chance to dial in the position to the knee and then focus on leg drive to the top to move the bar up instead of out, and practice with the final extension and bar contact to learn how to drive the bar up, and the arm action that continues to maintain proximity.

You can use muscle snatches and tall snatches as well to help practice the proper finish upward and the active motion of the arms to keep the bar and body close through the turnover. Of course, you can also do segment snatches with the pauses off the floor and at the knee to set yourself up to finish from the right positon, and/or use slow pull snatches to accomplish the same thing.