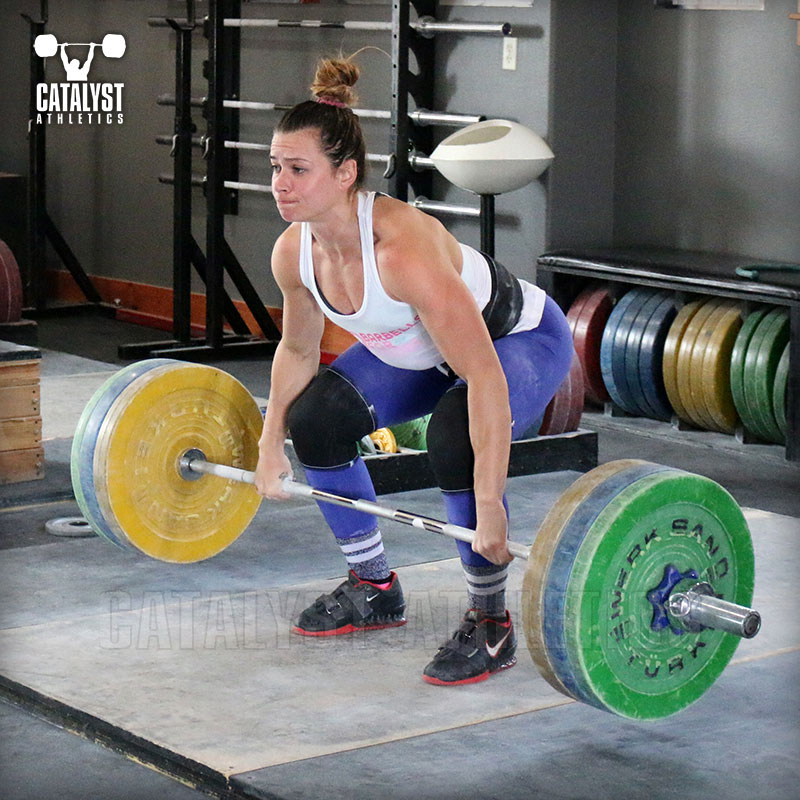 The start and first pull of the snatch and clean can be anything from something a lifter never even considers, to a technical challenge that drives a lifter crazy for years. While I’ll be the first to point out that it’s more technically challenging than it would appear to many outside observers, I’m also inclined to argue that if you’re truly confused, it’s more the result of it being overcomplicated than its actual nature.

I’m going to break it down in a way that should cover all the bases, but give you quick, simple guidelines so you can figure out what works best for you with as little sweat as possible.

Not every coach agrees on what a proper starting position looks like, but there is a pretty tight range of possibilities among competent and experienced weightlifting coaches (we’re going to ignore those who fall outside of this category because that’s the best way to get them to eventually go away).

My guidelines are simple: Again, these are guidelines—a little variation is fine to accommodate things like unusual proportions or mobility restrictions (the latter should be corrected). This position doesn’t have to be comfortable in the conventional sense of the word—it’s never going to be a position in which you want to hang out—so don’t go looking for comfort. The more comfortable you get, usually the more wrong you are (such as starting with your hips way too high).

The initial separation of the bar from the floor can vary among lifters somewhat, but for all new lifters, it should be a relatively slow process—not slow because you’re trying to be slow, but because you’re prioritizing control to ensure correct positioning and balance.

The movement should be initiated with the legs—in other words, it should resemble standing from a squat in the sense that the movement begins by pushing with the legs against the ground. This should be a smooth movement—don’t yank the bar off the floor. The primary problem with this is that it makes it very difficult to consistently maintain the correct position and balance, but it actually also makes it more difficult to produce as much force (two notable exceptions to the no-yanking rule are Zlaten Vanev and Kendrick Farris—you’re not them.)

This initial separation should allow you to maintain approximately the same back angle. The taller and longer-legged you are, the more of a shift in back angle you’re allowed to have, but it still shouldn’t be dramatic—if it is, you’re unloading your legs by shifting the hips up to open the knee without moving the bar significantly. Slow it down and control your position, and work on getting stronger with an upright posture through pulling and squatting variations.

Everyone wants to be a superstar and use a fancy dynamic start. But implementing one too soon is a huge mistake that can be very costly for your long term progress.

The purpose of a dynamic start is simple—to make the initial lift off the floor easier, and therefore faster and less fatiguing. Sounds great, so why wouldn’t you want to do it? Simple—if you’re not technically consistent yet, you’re introducing a lot of potential for more inconsistency.

As a new lifter, square away your snatch and clean with a static start and develop proficiency and consistency that way first. Let’s be honest—as a new lifter, you’re limited far more by your technical ability (and possibly mobility) than your strength, which means you don’t need any help lifting the bar off the floor (don’t try to tell me when you deadlift 180kg and snatch 70kg that you need a dynamic start to be successful). So a dynamic start at that point is all downside with no necessity.

Once you have reasonable proficiency and consistency and start snatching and cleaning weights that are actually somewhat tough to get moving, start experimenting with dynamic starts to see a) if you find it helpful and b) which type works best for you.

The first pull will always be slower than the second. It’s a simple matter of mechanics—the closer you are to the starting position, the smaller the joint angles, which means the greater the mechanical disadvantage (The shorter your legs, the faster the first pull will be relative to the second pull because those shorter levers mitigate this disadvantage to some degree).

As a new lifter, you’ll need to intentionally slow the first pull down. If you’re snatching 30% of your best deadlift and you go full blast from the start, it will be impossible for you to hit the optimal position from which to initiate the second pull, and your timing of that initiation will suffer. You’ll either blow right past that point, or you’ll actually have to slow down to get into it.

As you improve and your snatch and clean weights get heavier and heavier, you’ll eventually reach a point at which you actually try to move the bar as fast as possible in the first pull—it just won’t go that fast because of the mechanics mentioned above. You’ll naturally achieve the speed and tempo that you had to create artificially with the lighter weights (as an aside, you’ll have to control the first pull speed with your light warm-up weights when you get this good too).

During the first pull, the bar should move backward toward your body a little bit. This is not a dramatic movement, and overemphasizing it will result in your weight shifting too far back toward your heels and the bar being pushed forward excessively as the hips extend. All you need to think about is staying balanced over the foot and keeping the bar as close to your body as possible until it contacts at the hip (snatch) or upper thigh (clean).


Getting Better At It

Focus on these things in your snatches and cleans, and use exercises like pulls, deadlifts and all the many variations thereof to practice specific elements or emphasize your particular strength or technical needs more effectively.


1 Comments
Kajs
You did it again Greg...lifting the curtain and busting the controversy on one of the most discussed topics in the weightlifting world. Giving simple yet eye opening cues so every lifter can go through the check list in his head before the lift feel safe and secure and concetrate on the lift insted of worrying about his starting position. Thank you.