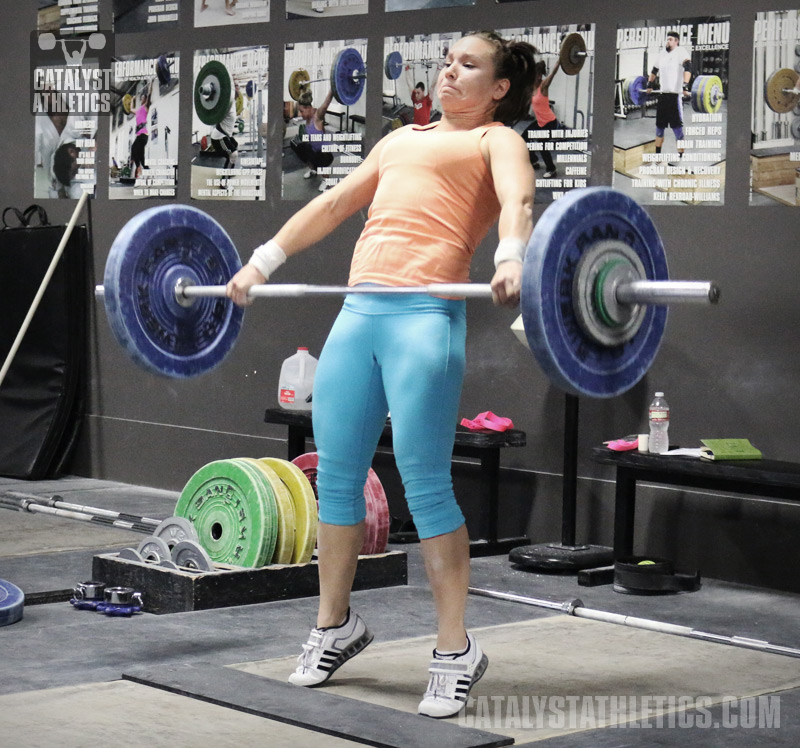 “Your arms are like ropes.”
I don’t remember the first time I heard this, but I know it was right in the beginning when I was learning the OLifts. I’ve continued to hear it (and use it) throughout my career.
In case you’ve never heard anybody say this, it’s a technical cue that’s intended to reduce premature arm pull in the snatch or clean. As you already know, weightlifters are supposed to use their legs, hips, back and shoulders to execute the pulling movements of the OLifts. If you look to your right, you see a pretty classic example of what an extended pull looks like. As you can tell, the athlete is elevating the bar by extending the body. The arms are basically just hanging on while the rest of the body does the hard work. This is proper technique, and it’s where the “arms like ropes” thing comes from.
When lifters are new, it’s pretty common to see them lift the barbell over their heads mainly by pulling it up there with their arms. They do this because they haven’t learned the correct triple-extension mechanics yet, so they just rip it up there without using their legs and hips. Common newbie mistake.
Telling a lifter “your arms are like ropes” while you’re teaching them how to pull correctly can be a really useful tactic. When they hear this idea, they start to understand that pulling with the arms is an inefficient way to lift. Once it starts to click, they forget the arms and think about the legs and hips. Then it’s a little easier to teach them how to get the bar overhead through lower body power and movement.
It’s a good cue. As I said, I’ve used it. But you wanna know something? I think I mentally held on to this cue a little too long, and it hurt my technique for a while.
Let me explain. If you use the “arms like ropes” principle and you emphasize the hell out of it, it’s very likely that the bar might swing out in front of your body after you’ve driven your hips into it. Raise your hand if “the swing” is one of your main technique errors. Your coach tries to get you to keep the bar closer to your body, but the damn thing still loops forward as it’s passing your abdomen and chest. This probably makes you jump forward, which isn’t good. Jumping forward is something you should avoid as much as possible.
There’s a very good chance that these problems might be caused because you’re letting your arms stay like ropes a little too long. Listen, the point I’m making is that you have to use your arms when you pull snatches and cleans. But you have to know HOW and WHEN to use them.
To truly keep the bar close to your body, you have to use your arms. You have to move your elbows in something of a slightly-upward-slightly-backward motion simultaneously as you’re jumping down into the bottom position. It’s not complicated. You’re basically just following through with your pull/turnover so the bar stays as close as possible to the abdomen and chest.
We all know this, yes? It’s called pulling yourself under the bar. If I’m not describing it in a way that makes sense, just watch a side-angle video of a world record snatch on YouTube and you’ll see exactly what I’m talking about.
NOTE: All of this is basically identical for the clean, with the obvious difference of the bar being caught on the shoulders instead of overhead.
So I just used 700 words to tell you that it’s important to pull yourself under the bar, right? You’re saying, “What the hell? We know that already!” Well, let me go a little further with this.
I lifted for five years and got up to a 140 kg snatch (308 lbs) before I really started to understand this stuff. That’s not an exaggeration. Obviously I was mostly using my body correctly during those years because you can’t snatch 140 kg without doing a lot of things right. However, I had a looping problem that lasted a long time and it’s what kept me from making the jump up to the 150 range. During the early years of my career, all I thought about when I snatched was the triple-extension pulling movement. It was my entire focus. Legs-hips-traps, legs-hips-traps, legs-hips-traps. I was strong and explosive, so I was able to work my way up to some big weights with this thinking habit. BUT IT WASN’T PERFECT.
I was stuck around the 140 range for over a year, and I now realize that the stagnation happened because of this exact technical point we’re analyzing. I just didn’t know how to use my arms. I had a great coach and he was telling me the things I needed to hear, but something just wouldn’t click in my brain. I knew what he was saying, but I couldn’t feel it.
Then, it eventually just started happening. I have no idea what caused it. All of a sudden, the right combination of hip-drive and arm action started to mesh. I focused on a few mental cues that worked, and my snatch technique got damn near perfect. I shot up to 150 and eventually higher, simply because I learned how to use my arms the right way…at the right time.
Listen, some of you are frustrated as hell about your technique. I get it. But remember what I just told you. I was snatching over 300 lbs and winning medals at the American Open before I figured this damn thing out. You’re not stupid or unathletic if you can’t put all the pieces together yet.
No matter how good you are, it’s still a constant battle to make everything flawless. We all have to fight this battle until…it just starts to click.

Greg Everett
I sometimes use the analogy that the arms are like elastic bands - as you're extending upward, the weight of the bar is stretching and loading them, so that when you hit the top of the extension, they pull you back down under the bar.
Sean Coppack
Great article still one of my biggest problems- I like your cue too Greg! Always very helpful articles from the Catalyst team!
Joshua
Good article! I'm curious as to your opinion on bent-arm/hip cleaning...I've changed to it recently and found, for me, I can get a good 10-12kg more than I can with straight arms.
Matt Foreman
Hey Joshua,
I experienced the same thing as you. When I learned to clean with my elbows bent, my technique improved dramatically and my weights went up. There are several world-level lifters who do the same thing. People like to use that old phrase, "When the arms bend, the power ends." But that's not 100% accurate. I understand the mentality behind the statement, but the fact remains that bent-arm cleaning can be done efficiently and there are a lot of good lifters who do it.