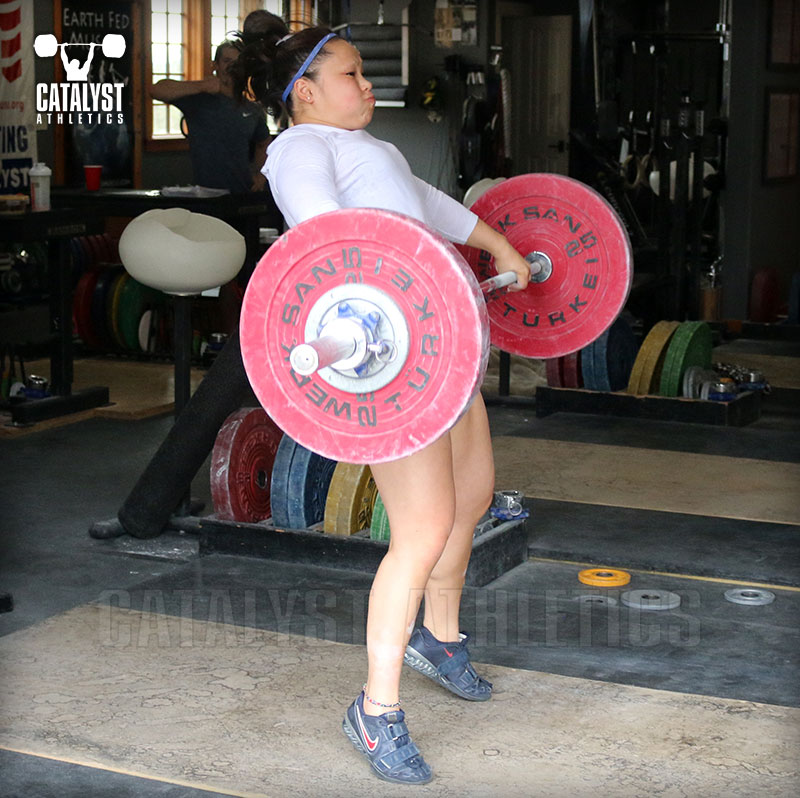 Elbow Woes Asks: My question is essentially: what causes pressouts? Anatomically, I have pretty good elbows for locking out. When the weight is about 90% I have noticed I sometimes bobble my elbow in the hole of a snatch. Not a lot but definitely enough to earn red lights. This sometimes happens in jerks but I think the snatch is worse.

My best presses and power jerks are very low compared to my best jerk. I don’t know if my terrible pressing strength is the root cause of this issue. (Lifetime bests: CJ 110, snatch 85, press 45, push press 68, and power jerk 78 as an average 69 kg female)

Greg Says: There are a number of causes of pressouts, but usually a given lifter experiences the same one consistently. A weak upper body, poor elbow structure, limited overhead mobility, poor timing, poor lift mechanics, fatigue and even simple distraction can all result in pressouts in the snatch and jerk.

The trick obviously—and the point of your question—is diagnosing the source so an appropriate fix can be determined.

Your pressing strength is arguably a bit on the low side. However, pressing strength per se has very little to do with the ability to hold a weight overhead in a locked position. The question is not if you can press or push press the weight up, but if you can hold it there with locked elbows since that’s the only way you should be holding it. The bar should be received with the elbows locked—in other words, the arms aren’t even totally supporting the load until they’re in a fully locked position. No need to extend the elbows under the full load.

A pretty easy way to test out whether or not you possess adequate upper body strength to hold the weights overhead in a locked position is to do just that—do jerk supports or overhead squats or the like with the weights you’re struggling with pressouts on, and if you can hold them and more with locked elbows, strength isn’t your problem.

Further, if you’re receiving the bar, the elbow is bending, and then re-extending into a locked position, that action alone proves you have not only the strength to hold the weight in a locked out position, but also to complete a press of it in the final range of motion. No way you can blame a lack of strength in those cases.

Anatomical problems have been ruled out—you can either fully extend (or even hyperextend) your elbows, or you can’t. For others, it may not be obvious, however, due to interference with other mobility restrictions, so an easy way to test is to extend the elbow fully while the arm is hanging at your side—there won’t be any restrictions on extension in that position.

Overhead mobility limitations complicates the issue. You can possess great elbow structure and a huge surplus of pressing or static overhead strength, but still be plagued by pressouts if you have restrictions in shoulder mobility. This will usually create problems in the jerk more so than in the snatch. If mobility is bad enough to cause problems with such a wide grip, that athlete probably can’t even get close to locking out the elbows with a jerk grip and the problem is entirely obvious.

In this case, though, you may be capable of achieving a reasonably locked out position if you force it with pressing movements, or eventually in the jerk with some extra work after receipt. The problem is with the immobility creating “drag” on the punching motion of the arms—slowing that motion down so that the elbows aren’t locked in time to support the bar properly—and in the continuous pull against the overhead position that must be resisted, meaning that any momentary lack of full aggression to maintain the position will cause the elbows to bend.

Next, timing is critical for ensuring a maintained lockout. If your turnover in the snatch or push under in the jerk is delayed, lazy (i.e. you’re not immediately pushing up against the bar at full force), or stops prematurely, the elbows either won’t lock out at all, or will “sag” as the full weight of the bar settles on arms that were initially fully extended.

Lift mechanics in both lifts will also influence lockout ability. In both the snatch and jerk, the bar always being received slightly too far forward will prevent the shoulder blades from being fixed in the proper position and the bar being positioned optimally to be supported, eliminating the strong base for the arms, and making the system “soft” relative to the structure of the proper position.

A final consideration is your hand and wrist position overhead. If you hold the bar too far toward the fingers and have an excessively extended wrist, you may be able to keep everything locked with lighter weights, but this position will cause softness as the weights increase, and often in the form of movement up and down.

That you experience a “bobble” in the snatch suggests to me that the issue is probably one of timing and/or mechanics. Test (or check) your overhead strength as described previously and add more static support work if it’s lagging. For mechanics and timing, use drop snatches, tall snatches, and snatch from power position to work on putting the bar exactly where it needs to be and aggressively punching up into it and continuing to push. Finally, start holding all of your snatches and any exercises like overhead squats and snatch balances for 3-5 seconds overhead before recovering, and lock that overhead position forcefully for the duration of that time.


1 Comments
Sameesh
Nice one. Alot of this applies to me, especially the "momentary lack of full agression" in the turn over/overhead phase. I might also mention internal rotation of the humerus. Focusing on that starting during the pull-under, and squeezing my deltoids towards my ears, has done alot to reduce that bounciness/bobble that can occur during reception.