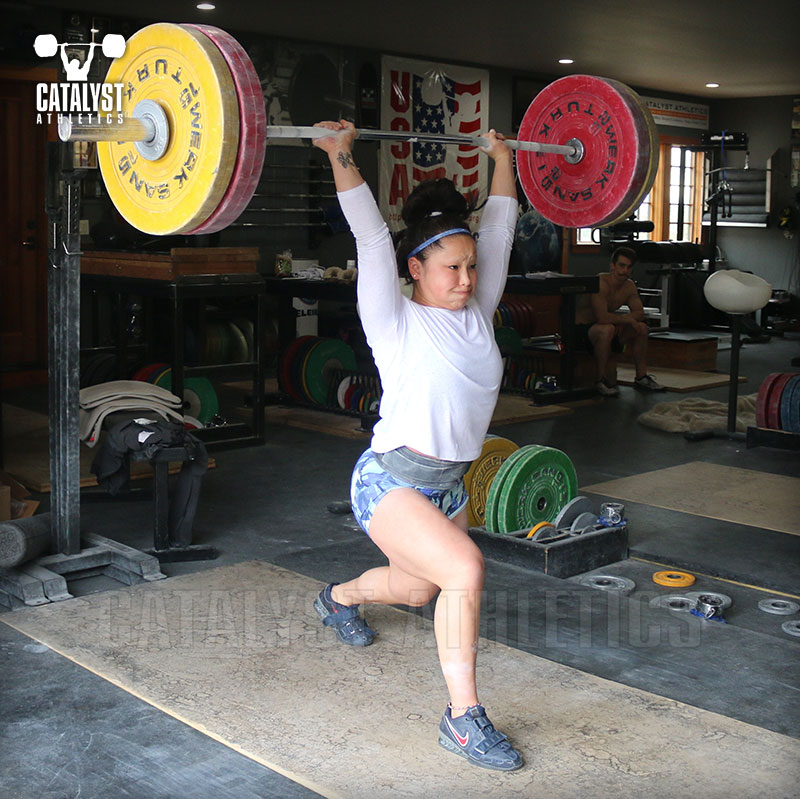 The press-out rule has been around forever in weightlifting. It’s one of the fundamental technical rules of the sport, and probably the most prominent one. If you’re a weightlifter, having a perfect lockout is one of your top priorities because you don’t want to see those red lights pop up after you just worked your ass off to lift a big weight. The referees are watching for press-outs like snipers, so you’d better get it right when you’re on the platform. This is pretty basic stuff in Olympic lifting. Nothing new.

So… why have people been going nuts about the press-out rule lately? Social media has been a flaming mess of complaints and arguments about it. Audiences at meets are booing and hissing when lifters get nailed for it. It’s been a standard part of the sport for decades, but people are wigging out about it all of a sudden. When press-out conversations start on Facebook, the weightlifting community looks like the French castle guard in Monty Python’s Holy Grail movie, screaming, “YOUR MOTHER WAS A HAMSTER!!”

As far as I can tell, there are two basic complaints getting tossed around about press-outs:

1. Some people from the masters community are pissed off because they’re saying old lifters are getting unfairly hammered by the press-out rule. The underlying (and sometimes directly stated) suggestion is that referees should cut the geezers some slack because their crusty old elbows just don’t fully lock out anymore.

2. An even bigger group of people are saying the press-out rule is getting ridiculously over enforced these days, period. Not just with masters, but with the sport in general. You go to meets and see lifters getting red lights for press-outs when it doesn’t look like there was a damn thing wrong with their lockouts.

These are the things people are saying. Here are my opinions about each complaint, in the same order I listed them.

1. (the masters thing) This one is bulls--t. You have to be able to complete the Olympic lifts legally to compete in this sport, regardless of how old you are. Call me a jerk, call me insensitive, whatever. I don’t personally think referees should go soft on anybody because of their age. The only way to honor the sport’s integrity is to use equal standards for everybody. Once referees start giving white lights to obvious rule infractions based on their personal feelings about the lifter’s old age and physical status…where does it end? Refereeing becomes a sentimental pardon for people with anatomical difficulties, and then you’ve got an even bigger mess on your hands.

There’s an obvious solution to this. If you can’t fully lock your elbows, just follow the rules and show your compromised lockout to the referees before you start the lift. This gets done all the time, and it’s totally legal. If you compete, you’ve probably seen lifters do it. The referees will judge your lifts based on the lockout you showed them, even if it’s really ugly. All you have to do is make sure you complete your lifts with the same lockout position you showed. That should solve the whole problem.

2. (excessive press-out strictness across the whole sport) Do I think the enforcement of the press-out rule has drastically escalated? Are lifters sometimes getting red lights for lifts that don’t show clear violations of the rule? Yeah, a little bit. I recently watched the 2019 European Championship, and I couldn’t believe some of the lifts that were getting turned down. I’ve sat in the referee’s chair plenty of times, and I’m a stickler for the rules, but I was still flabbergasted at some of the calls I saw. And I’m not just talking about this one meet. I’ve been noticing this at high-level meets for at least the last five or six years. Press-out calls are stricter now than I’ve ever seen in my 30 years as a weightlifter.

Do I know the reason for the increase in strictness? Nope. Can’t say that I do.

Don’t get me wrong. I’m not saying any of this is ruining weightlifting. Most of the lifters in the sport are locking their lifts out beyond any shadow of a doubt, and they’re getting three whites. So we’re not talking about an apocalypse.

And none of this is intended as a slam at the referees and officials. Their job isn’t easy, and we rely on them to enforce high standards and keep our sport from turning into a barnyard joke. As a lifter or coach, I know it’s easy to blow a gasket and lash out in anger when you get red lights on a lift you think you made cleanly. I can’t say I’ve never done this, because I have. I’ve seen other lifters do it too. Don’t think I’ve ever seen it improve the situation.

At the end of the day, lifters have to put all the responsibility on themselves. This is how I see it. The only way to avoid having a problem with press-outs is to make sure your lifts eliminate any possible shred of a question. And if your genetics (or old age) have dealt you a bad hand and given you a scruffy lockout, take advantage of the rulebook provision that addresses this. As a lifter or coach, you can’t control what the referees are going to do. All you can control is what YOU do. That means it’s YOUR JOB to make sure you never get red lights for press-outs.

Plus, I also think the rule is being enforced fairly 95% of the time. Lasha Talakhadze doesn’t get redlighted for this because he doesn’t press out the bar. Behdad Salimi get redlighted because… he does. Most of the time, the officials are getting it right. But there’s no denying that competition judging is much tighter these days. It’s the duty of the lifters and coaches to respond accordingly instead of complaining about it. My two cents.

Ask Greg: What Causes Pressouts (and How to Fix Them)?
Greg Everett | Olympic Weightlifting Technique

Rob Macklem
2019 Europeans had as strict a judging as I have ever seen in my 50 yrs of lifting, regrettably that absolutely was NOT the case in either the 2019 Asian or Pan Am championships. Definite inequity and fairness in officiating. Two allowing soft slow elbow lockout the other NOT.