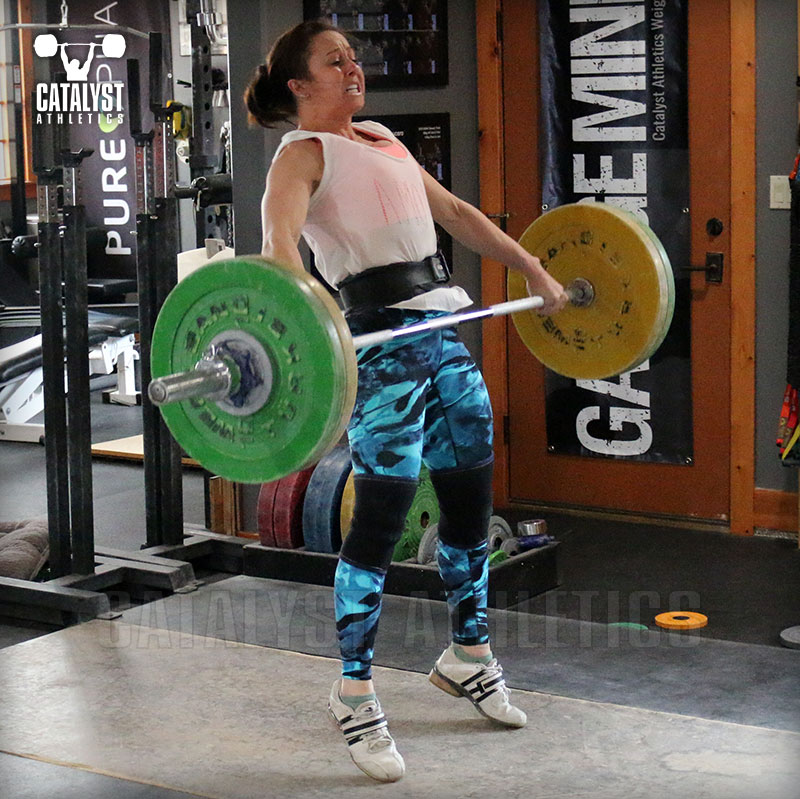 When you’re in an airplane bathroom, there’s usually a little sign right above the sink that says something like, “As a courtesy to other passengers, please clean the basin before leaving the lavatory.” You usually read it before you look down in the sink and see the mess that was left by the disgusting scumbag who was in there right before you.

Like most things in the world, this little sign makes me think about Olympic weightlifting. So even though you’ve already read a few witty articles on the internet about proper etiquette in this sport, I think I can add a few tips that will keep you from becoming the aforementioned scumbag who won’t even clean up his mess in the bathroom. Here we go.

As a courtesy to other weightlifters…

Please don’t let the bar roll across the floor after you miss a lift Let’s say you attempt a lift and miss it, either in front or behind, and the bar goes rolling across the gym. You don’t stand/sit there and pout while it rolls away and knocks stuff over or hits somebody’s ankle. You grab it and stop it. At least that’s what you do if you’re not a card-carrying member of the International Little Bitch Society. You’re not the only one in the gym, podnah. Show some respect.

Please don’t jack somebody’s weights During a workout years ago, a young guy took a 5 kilo plate I was using and put it on his bar for a big snatch he was getting ready to attempt. He did this without me seeing it, and when I realized what had happened, I walked over and pulled it off his bar and took it back to my platform. He was chalking his hands when I did this. He didn’t see me take it, and I didn’t tell him. So he walked up to his now-misloaded-by-5kg-on-one-side bar and attempted the snatch. He pulled it halfway and dropped it, yelling, “What the hell?!” when he felt the misload. I was standing directly next to his platform, looking straight at him, waiting to see if he would say anything. He looked over at my bar, saw the 5kg plate on there, realized what happened, and just went back to his workout without saying anything. I would like to think I taught him a lesson. Asking to borrow something you’re gonna bring back is okay. Taking without permission is not. I once saw a guy choke another guy in the warmup room at the American Open for doing this.

Please don’t walk in front of people when they’re lifting or talk to somebody when they’re clearly getting ready for a lift The walking-in-front-of-people thing is pretty self-explanatory. And as for the other part… listen, I’ve actually trained with people who tried to ask me questions and carry on conversations while I was standing over a 140 kg snatch with my hands chalked and my eyes closed in concentration. I cleaned a huge weight once and stood there with the bar on my shoulders getting ready for the jerk, and a guy asked me, “What body part does that lift work?” Some of these people just don’t get it, but it’s not their fault. They weren’t raised right. Do your best to help them respectfully. And if that doesn’t work, you might have to consider winding your leg back and kicking them in the balls like you’re trying to boot a 60-yard field goal to win the Super Bowl. (NOTE: I used “balls” for that last analogy on purpose. Women are usually smart enough not to do this.)

If you get pissed and cuss sometimes in the gym, please don’t do it in competition You represent the sport when you’re on a competition platform. When you blow a gasket after a missed lift and yell “F##K!” on that platform… in front of a room full of spectators, parents, kids, and fans… you reinforce the stereotype those people already have about us. They think we’re a bunch of drugged-up maniacs with borderline personality disorder, and you’re not helping us by acting like one.

Please don’t talk while you’re still in the process of completing a lift If you say “Man that sucked!” when you’re in the bottom position with a snatch overhead, or “Jeez this is heavy!” as you’re standing up with a big clean, you look like a little kid who’s trying to get attention by acting silly.

Please don’t try to talk like an equal with somebody who is clearly your superior I once heard a conversation between an international-level weightlifter with 15 years of experience and a three-year intermediate lifter who had competed in a couple of American Opens (and placed near the bottom). The intermediate lifter was rambling on and on about how his training philosophy differed from what the elite lifter did. The elite lifter said, “Look buddy, I was on the Olympic Team. You’re… just some guy. You’re not qualified to disagree with me.” I committed the whole conversation to long-term memory because I love it so much.

Please don’t leave your crap lying all over the gym like it’s your bedroom I will absolutely never stop being amazed at how many grown adults don’t get this.

Please don’t be one of those idiots who has to have a specific song playing when you try a big lift Believe it or not, the competition staff at the Olympic Games isn’t going to stop what they’re doing and make sure “Crazy Train” is playing when it’s your turn to take the platform. I know, I know… It’s so unfair when people fail to recognize just how special and important you are. So do yourself a favor and train to go into battle no matter what’s going on around you. You shouldn’t even give a damn about what music is playing when you’re lifting if you’re locked in and mentally tough enough.

If you’re squirming because I just described your regular behavior, don’t worry. I’ve personally done everything on this list at least once. None of us are perfect. And as always, you’re entitled to disagree with anything I say. I only write these things because I want you to be a model of courtesy, manners, and consideration… just like me.

Armina Vazquez
What a great post. I'm just Learning how to Olympic lift. But I'm not new to exercise. I was a power lifter back in the day. Your words resonate with me reminding me of my coach. Everything you posted is exactly was he taught me. All these years I've always remembered these tips, words of wisdom etc. Hopefully others will read this and do the same. My pet peeve, someone walking in front of me as I lift.
John
Walking in front of a lifter while they are attempting a lift - I get it. Absolutely. It makes sense. Minimize distractions. However, some lifters get carried away with this idea that nothing should be in their line of sight for a county mile. I go with the 2 platform rule. If you have a 2 platforms distance free of distraction, you should be able to focus. If you can't, please don't shout at me to move out of your cyclops vision line of sight because I am distracting you from the other end of the gym.
Moses
There are only ten rules you need to worry about in your life and these eight aren't any of them, utter b*ll*cks x