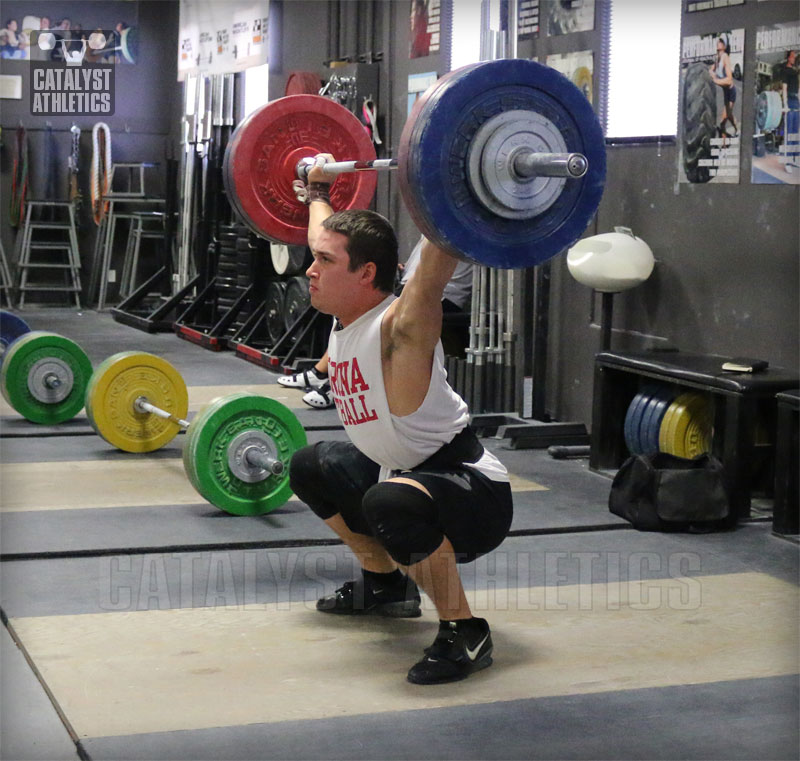 “Which training program should I be following?”
“Can you take a look at my program and tell me if it looks okay?”
“How many times a week should I be squatting?”
“What’s the perfect number of days per week for my program?”
I hear these questions…a lot. There are thousands and thousands of weightlifters in action these days, and many of them are working on their own, trying to figure the sport out with the scattered resources they can find in cyberspace.
This results in a bunch of ambitious lifters running around with their heads up their butts trying to find a perfect training routine like Tom Hanks trying to create fire in that movie “Cast Away.”
Back when I got started in the sport, here’s what you had to do if you wanted reliable training help: you had to pack up your whole life in your car and move to another part of the country to find a good coach who would agree to train you. Now, you just need Facebook.
Diagnosing a lifter’s training program is like listening to a noise coming from a car engine and trying to figure out what’s wrong. Sometimes the problem is obvious, but there are plenty of other times when you have to open up the hood and crawl into that sucker to see what the hell is out of whack.
I don’t have all the answers to anything, but I can definitely offer up a nice juicy list of possibilities for you. Here are some things that might be wrong with your weightlifting program:
1. You’re training too hard

Believe it or not, this is very, very often the problem. I was having a conversation not too long ago with a lifter who showed me his training program on paper and asked me what I thought. This guy was 36 years old and the volume of his routine was kicking his nuts in. I took a look at what he showed me, and here was my response:

“Listen, when I was in the best years of my lifting career, I was in my early 20s training for the Calpian club in Washington. We had the toughest training program I’ve ever been on. Our team was all young, training full-time, top in the nation, in the prime of our athletic lives, and our program was insanely hard. We could barely handle it. And you know something? This program you’re following is more work than we were doing.”
Weightlifters are aggressive and motivated. Most of them will lean towards the direction of overdoing it. So if you’re walking around beat to piss all the time and your joints feel like somebody pounded them with a hammer, you’re probably using a program that’s too much work for you. Living with pain is part of the sport. We all know that. But there’s a difference between living with pain and spending every day with one foot in the hospital and the other on a banana peel.
2. You haven’t been doing it long enough

Do yourself a favor and don’t turn into one of these modern wackadoo personalities that tries something for a limited time and says, “This crap isn’t working!! I’ve tried this new program for three weeks and my whole career isn’t different!! Thanks for wasting my time, jerkoff!!”

Trust me, I get it. I’m as impatient as anybody. I’m one of those people who starts screaming “PIECE OF #@$!” at the TV remote if I press the channel changer and it takes the screen more than a nanosecond to switch.
But you can’t apply that mentality to weightlifting. This sport is all about long term development, and that means long term changes and improvements as well. Sorry, iPhone generation. You’re just not gonna get what you want instantaneously in this game, no matter how many F-bombs you shriek when you can’t get service.
3. You’re screwing with it too much
Lawdy lawdy, this one drives coaches up a wall.
If you’ve got a training program sitting in front of you, chances are that program is designed to be effective by itself. That means it’s supposed to produce results, but only if you follow it the way it’s written. If you look at your training program and start up with this crap:
“I think I want to add some extra exercises to this.”
“I think I want to CrossFit my teats off on the days I don’t have to lift.”
“I want to train a lot heavier than the weights that are on here.”
…. and any more of the myriad blockhead ideas I’ve had to listen to over the years. If you want to add things (like CrossFit) to your program, that’s fine. Just make sure it’s programmed in, and have a clear understanding of how it’s going to skew the results you get. Don’t take a program that’s supposed to exist on its own and start spiking the punch with a bunch of additions that don’t fit the overall plan.
4. Nothing is wrong with it. You just need to keep working because weightlifting takes a long time to get good at.
Not much commentary needed on this one.
Summary

Weightlifting is very hard. It’s much harder if you’re impulsive, scatterbrained, reckless, short-sighted, unrealistic, forgetful, unreliable, and stupid. Those factors really make it a lot more difficult to be successful.
I’m a big believer in being adaptable and making battlefield adjustments…when it’s the right time. I’m also a big believer in staying the course and not changing anything…when it’s the right time. At this point, I think I’ve got a very strong instinct for which one of these is appropriate in most programming situations. And it only took me a little over 20 years build this instinct.
So you wanna be a weightlifter, huh kid?

Tom @ Ghost Fitness
Nice post Matt, not that I can speak from experience but training partners of mine have been through the weight lifting struggles, repetitive is the word I hear quite a lot, but practice makes perfect I guess. Nice post.
Julien
Very nice post i like your style