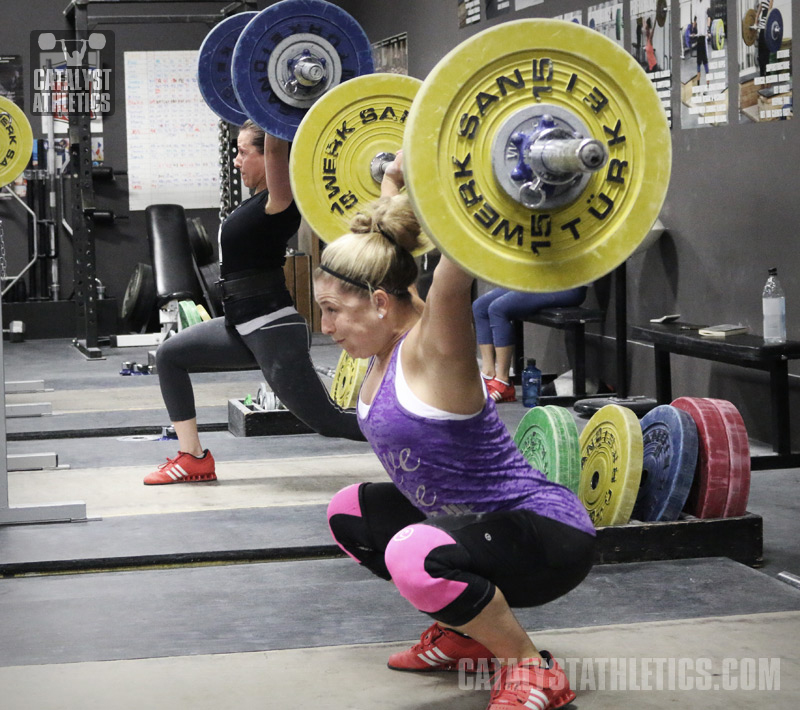 With the explosion of interest in weightlifting, there is a parallel increase in new weightlifting clubs. We get a lot of emails asking about every aspect of running a weightlifting club, and one of the most common questions is what the best way to program for a weightlifting team is: to write a single program for the team, or to write individual programs for each lifter. This is a tricky question—there isn’t a right or wrong way, and what makes sense will vary with the circumstances.
There are some benefits to writing a single team program. The most important one in my mind is that it creates an environment of supportive competition. It’s easy for lifters to push each other and get competitive to push themselves harder when their teammates are doing the same lifts along with them. This can be informal competition—everyone is keeping an eye on what everyone else is doing and trying to stay ahead of them, whether in terms of absolute weight, or relative to bodyweight or current PRs. It can also be turned into formal competition with some kind of prizes or money for the best performance of the day as a way to incentivize the lifters and garner a more competitive spirit.
The most obvious benefit of a single team program, obviously, is convenience for the coach—writing one program is a lot easier than writing several. Of course, it can be tough with regard to deciding how to create a single program that best addresses the possibly disparate needs of multiple athletes, but in any case, it’s less time and work.
The drawback of a single team program is of course the fact that a team is made up of individuals, and those individuals can be very different in terms of ability and needs. If you’re fortunate enough to coach a team of only advanced athletes, the differences may be not be significant enough to matter, but I would say this is unusual. More often than not, any group of lifters is going to need to focus on different exercises or elements of technique, require and handle different levels of volume and intensity, and possibly have slightly different training schedules.
Writing individual programs is very time-consuming, and it also makes it a bit harder as a coach to know what’s going on with your lifters all the time. You also lose some of the competitive spirit and environment I talked about above, although competition is not impossible with individual programs, it just requires a bit more creativity.
In a large group with a range of abilities, lifters can be split into levels and a program written for each level—for example, you may have three programs running, but several lifters doing each one. In this way, you’re able to address some of the varying needs of your lifters without killing yourself trying to write twenty programs.
Another approach is to create a single team program template and then make minor changes for individual lifters. This can be done on a day to day basis at the time of training, or it can be prescribed ahead of time.
The method I’ve settled on at Catalyst Athletics is writing individual programs, but at times, some of the lifters will be doing essentially the same program with needed changes to volume and exercises for each of them. They only receive a week of the program at a time, so they know what they’ll be doing for the next week, but they know it may be adjusted day to day based on what I see, and I can make changes to the program as a whole as we progress through it.
This can get confusing, so each day I have a clipboard with everyone’s program on it so I know what they’re doing and can keep notes on how they’re doing or any changes we make. At the end of the week, I enter all of my notes into each lifter’s program file (an Excel workbook for each cycle that has the actual daily training as well as all of my notes and plans for the cycle and current PRs) and use those notes to make any needed adjustments to the next week of programming before I send it out to the lifters.
Every coach needs to find what works best in his or her own circumstances, and it will likely change over time as the number of lifters and the composition of ability levels changes.

Jonathan D
Good read.
David Kolton
I'd Love to get a peek at a sample excel workbook that you keep for your individual athletes!