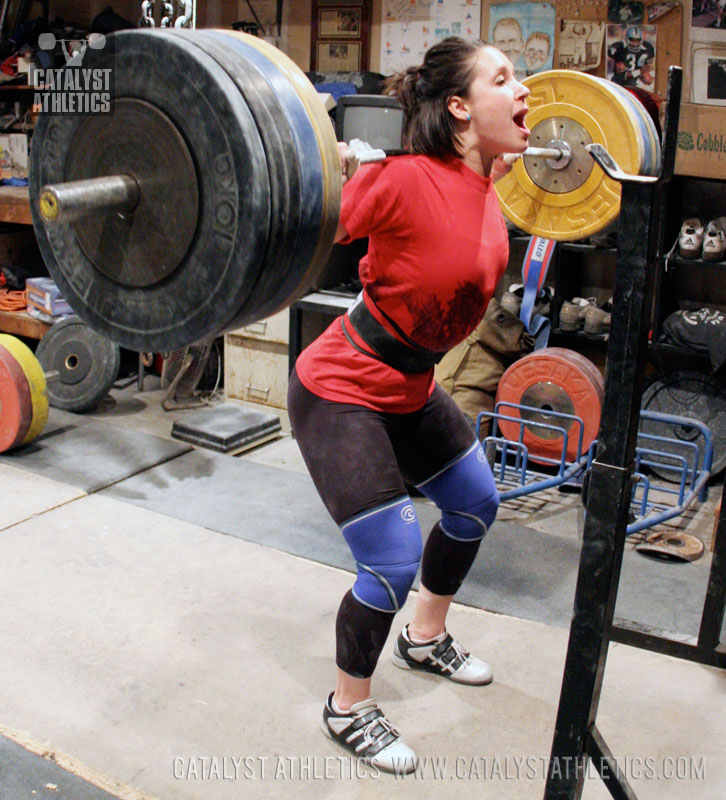 Breath control is critical for increasing and maintaining the structural integrity of the torso while under heavy loads. The supporting musculature is alone inadequate—in order to adequately stabilize the spine, the abdominal and thoracic cavities must be pressurized. Additionally, we need to create as broad of a base for the torso as possible—the rationale for this should be obvious if one considers the structural integrity of a pyramid versus an upside-down pyramid. Drawing in the abs may look nice on the beach, but it will dramatically diminish the ability of the body to support the kind of forces we intend to introduce.

The torso has only a single supporting structure along its height—the spine—on one side, and this structure articulates in all directions, requiring additional support to maintain rigidity. The weak point is the circumference below the ribcage in which there is no rigid structure tying the torso into the pelvis—this creates a compressible area into which the torso can collapse forward and to the sides.

This area is of course filled with organs, the tissues of which are relatively incompressible, but the space inside of which we cannot directly make more resistant to compression. Above this, separated by the diaphragm, are the lungs. This provides us a convenient way to reduce the compressibility of the contents of the torso. By filling the lungs, we increase the rigidity of the thoracic cavity, and we also force the diaphragm down, which compresses the organs of the abdominal cavity somewhat.

To improve further on this compression, we can tighten the musculature surrounding the torso, which prevents unwanted expansion of the container walls and the resulting reduction of the potential for the torso to collapse.

This pressure improves the rigidity of the trunk, which increases force transfer from the legs and hips to the barbell and helps preserve the desired extension of the spine to avoid injury. It also reduces the pressure on the intervertebral discs, and breath-holding improves the ability to create muscular force.

The athlete will need to draw in as much air as possible, allowing the abdomen to expand and the diaphragm to contract, ensuring the lungs are able to fill completely; filling the lungs partially by only allowing the chest to lift and expand is not adequate. Once this breath is taken, the lifter will tighten down the abdominal and back musculature to increase the internal pressure and reduce the potential for flexion or extension of the torso. This effort to tighten down around the pressurized torso will push air out of the lungs and up the trachea—the athlete will need to close the glottis in order to keep the air in (this should happen naturally with the effort to hold the breath).

It’s important that the athlete not “hollow”, or draw in the abdominals as many have been taught to do or believe is correct. If the abdominals are drawn in, the base of support is reduced in width, and this is obviously not beneficial. We want the muscles activated tightly while maintaining a broad foundation to support the load. It may help athletes having difficultly with this activation to think of pushing the abs down. (This does not mean that the transversus abdominis is not active; it simply means that it should not be the sole focus of the stabilization effort and should not be cinched in to a degree that limits the ability to fill the trunk adequately with air.)

Pressurization should be maintained throughout as much of the movement as possible. There will be times, however, such as during the recovery of a clean, that the lifter will feel dizzy and even near unconsciousness. This can be because the athlete is not properly racking the barbell and the pressure is compressing the carotid arteries and reducing blood flow to the brain, but it can also be from actually holding the breath and bearing down simultaneously; these actions, especially when combined, stimulate the vagus nerve and reduce heart rate and blood pressure (this can be easily demonstrated by feeling your pulse while breathing normally, then holding your breath—you will feel an almost immediate reduction in heart rate). In some cases, this can cause unconsciousness, but this can be avoided by paying attention and reacting appropriately.

If dizziness or light-headedness occurs during lifts, the athlete should release a small amount of air during the highest-pressure or highest-effort moment of the lift (e.g. the sticking point of the squat) by making some noise. This will release some pressure and prevent dizziness while maintaining trunk stability. Some athletes will be more comfortable, and even feel stronger, making a habit of always releasing air with noise during the recovery of the squat, as long as the release is controlled and minimal. If dizziness is considerable, it is always advised that the athlete drop the bar immediately and sit down safely to recover.

During the explosive second pulls of the snatch and clean, and even sometimes during the drive of the jerk, some lifters will make noise with an expulsion of a small amount of air. This is not problematic and is usually helpful in increasing the athlete’s aggressiveness.

The effect of torso pressurization can be demonstrated easily with a new lifter with nothing more than un-weighted squats. The athlete can pressurize the torso properly and perform a few squats, utilizing the bounce to recover. Following this, the athlete will expel as much air as possible, and squat again with the bounce. Invariably the difference is dramatic enough to immediately elicit some kind of exclamation from the athlete.

Pressurize the trunk with all structural lifting, and learn to control that pressurization, and you'll be maximizing both safety and performance.

dbones
check valve... err i think you mean a relief valve, a check valve allows flow only in one direction, a relief valve protects a system from overpressurization
Greg Everett
Right you are Ken.
Mark
using your air filled lungs, while attempting a power movement, does not increase rigidity of the torso.
In fact the act of holding your breathe while attempting exertitive exercise, induces the valsava manuever, causing a drop in blood pressure and decrease in oxygen profussion to your muscles. Thus the light headedness.
Exhalation when exerting, causes contraction of the torso muscles, and extension of the spine, resulting in the muscular stability you desire.

peter
I have been trying to do the deep breaths and have noticed a difference; but do you hold the one deep breath during all the reps you have to do, such as squat- 3 rounds 8 reps each exhaling slowly, or do you take one after each rep. after i get the bar on my back i can't take as deep a breath as i did before taking the bar off the rack.
Greg Everett
Peter -

Take another breath (or a few) between each rep.

Fitz
What is yall's take on "power breathing". This involves forcefully expelling your breath once you hit the "stick point" This helps you power through the lift. Then suck in air just before beginning the next rep.
Greg Everett
Fitz -

See second to last paragraph.
Tonia
I'm new to Olympic Lifting and so far like everything Greg has to say. The idea of using the breath to 'broaden the base of support' doesn't seem correct to me though. My goals tend towards aesthetics rather than maximal lifting however I don't see how expanding my lower abdomen will provide a wider base of support than my hips (I'm female). Having said that, I've watched the way his lifters lift and they look really good - so maybe this is just a communication issue regarding individualised breathing? I would love to hear back if you get the chance - I find the aspect of breathing regarding force production fascinating and there seems to be limited information on the subject. Many thanks. Tonia
Richard
Is this known as the valsalva maneuver?
Greg Everett
Tonia -

No one said anything about making your abdomen wider than your hips. More importantly, this has literally zero relationship to aesthetics - we're talking about athletic performance. I suppose my writing "as wide and deep as possible" could be misleading. The point is that you need to maintain the breadth. Imagine a cylinder supporting weight, and then imagine that same object in an hourglass shape - which intuitively would be stronger?
DavidH
Well during strength training, you should breathe deeply—approximately 75 percent of maximum—into your belly and hold that breath if possible throughout a repetition, exhaling only when you complete the rep. This provides optimal support for the spine, and it makes you stronger structurally. In simple terms act naturally When lifting submaximal loads, your normal exhalation-inhalation patterns are usually sufficient, or perhaps a longer breath phase with a short breath-hold at the most difficult portion of a lift.
Danny
Hi, just to clarify when I take a deep breath and hold it then cinch circumferentialy do I hold my breath throughout the squat movement on the negative and positive phase? In the paragraph before last you say do a few squats unweighted I can’t imagine I’d be able to do very many holding my breath the whole time. I have always breathed in on the negative going down and breathed out on the positive?

Thanks and I would really appreciate your response.
Danny - You want to take a big breath in before you start the squat, then hold it as you go down. You can hold it throughout the entire squat, but if you need to realease some air because of the load, let it out slowly and not all at once. If you let it out all at once, then you will lose some tightness in your core.