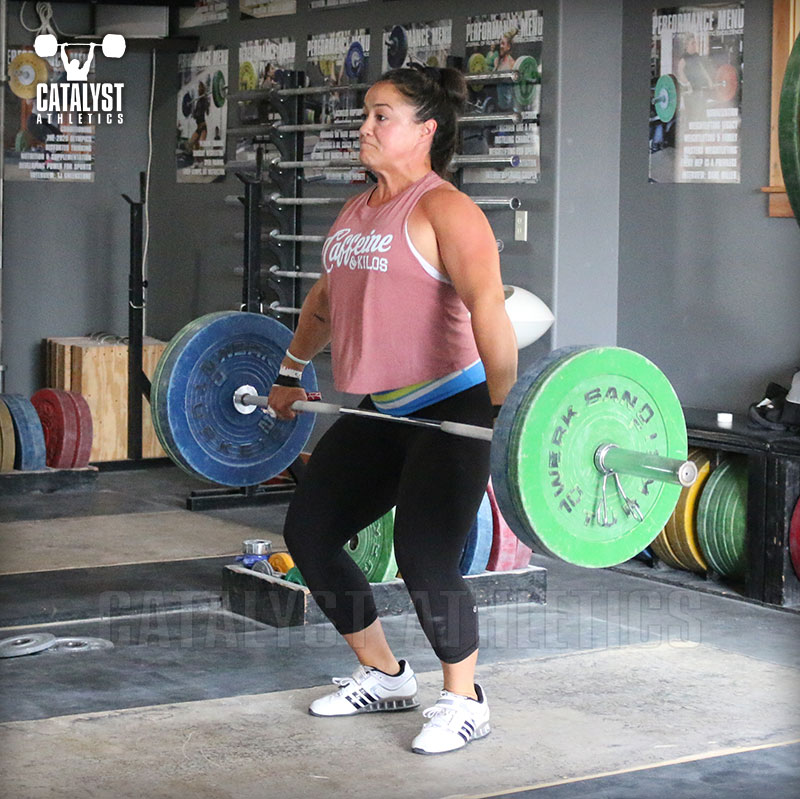 The dip snatch/clean and snatch/clean from power position are exercises I use a lot with my lifters, and there’s a lot of confusion out there on the terminology, execution and purpose, so let’s straighten it out once and for all.

First, both exercises use the same “power position”—trunk vertical and knees bent. This is essentially identical to the position of a jerk dip (hence my calling it a dip snatch/clean years ago). Yes, I agree calling that the power position is questionable, but I didn't name it—I'm just working with what I've got. The only difference is whether you begin the lift by holding that position statically first (from power position) or if you begin standing tall and move in an out of it as a countermovement (dip).

The primary purpose of both lifts is to improve vertical leg drive at the end of the pull, which is commonly cut off early or totally overpowered by hips or an excessive backward lean. By beginning in such a high position, we’re greatly limiting the time and distance to accelerate and elevate the bar, which means we have to generate more force in less time, and by placing ourselves in the power position, with knees forward and trunk vertical, we’re training the proper position for us to be in after the scoop, which sets us up for a strong vertical push with the legs.

The secondary purpose is to develop aggression and speed in the pull under the bar. Because we’re limiting our ability to elevate the bar, we have less time and space to reposition ourselves under it, which means our timing has to be optimal—you have a much smaller margin for error than in a full lift.

Finally, the exercises are helpful for building confidence. When a lifter is able to snatch or clean a huge percentage of their best classic lift from dip or power position, they can’t help but be more confident in heavy lifts from the floor with all of the added time and space to accelerate the bar. That confidence applies to the pull under as well—they learn to trust their ability to change directions and get under the bar even with heavy weights they may otherwise worry aren’t moving fast enough.

If you think a dip snatch isn’t a good exercise because you’d never have a countermovement like that in an actual snatch or clean, that same logic would preclude you from doing any lifts from the hang unless you pause in the hang position for at least 3 seconds to eliminate any stretch shortening reflex. Otherwise, all hang lifts have a countermovement that adds force potentiation to the pull that doesn’t exist in a lift from the floor. You’d have to use a perfectly static start on any block lifts as well.

If you truly believe no lift that doesn’t perfectly replicate the classic lift should be used, you have to eliminate every single exercise other than the snatch and clean. No powers, no hangs, no blocks, definitely no muscle snatches or snatch balances... It’s an extreme rationale that eliminates a huge array of valuable exercises.

Suggesting a hip snatch as an alternative makes little to no sense. The dip or power position is a position that all lifters will be in during a properly executed lift—it’s the end of the scoop and the point at which the bar should first come into full contact with the body. A hip snatch, on the other hand, is creating an artificial position that a lifter will never achieve during a snatch or clean—you’ll never be over the bar like that with the bar in the hip.

You’re also adding a direct push against the bar with the hips to contribute to its elevation and acceleration that doesn’t exist in a real lift, which would be analogous to the bounce you might get of the bar off the upper thighs in a dip snatch—so if you have an issue with a possible bounce of the bar in a dip lift, you have to have an issue with the hip push in a hip lift or you’re just fooling yourself.


Why One or the Other

The obvious question is why use one or the other? I consider the lifts from power position as the default or the more basic of the two—this is where any lifter should start. Because we’re holding the power position prior to lifting, we have a chance to feel, adjust and create the perfect position and balance, which means better learning and reinforcement of this critical point of the lift. Additionally, by eliminating any elastic contribution to the lift, we’re demanding the body generate more force in less time, helping improve rate of force development (i.e. explosiveness) and teaching the lifter to be more aggressive, committed and confident. It’s the more challenging of the two, but also the simpler.

The dip variation, once well-practiced at least, will allow an athlete to lift more weight—they’re gaining the additional force of a stretch-shortening reflex to the leg drive. This means that the dip variation is a good choice if the timing of the change of direction at the top, and the mechanics, aggression and timing of the pull under the bar is the bigger issue than leg drive timing or power for a given lifter.

So does every lifter need to use these exercises? Of course not. Like any supplemental lifts, what’s valuable depends on the needs of a given lifter. I use them so frequently because weak or poorly timed leg drive is such a common problem. But there are plenty of lifters who don’t have the problem. Some of those lifters may also be very adept at getting under the bar well. Such athletes don’t have any particular need for these exercises—their time and energy would be better directed into exercises that address their weaknesses.

There may be some exercises out there that are truly universally stupid and of no use—but I’d argue that nearly every exercise has a reasonable purpose and value in the right circumstances. The trick isn’t classifying exercises as valuable or not, but learning to determine why and when each can be valuable—and then employing them accordingly.

Matt
Still not super clear on what constitutes a "from power" vs dip variation. I see your arguments for each, but not a definition of each.
My B. Somehow I overlooked that (added).

"both exercises use the same “power position”—trunk vertical and knees bent. This is essentially identical to the position of a jerk dip (hence my calling it a dip snatch/clean years ago). Yes, I agree calling that the power position is questionable, but you can blame coach Lyn Jones for naming it that when he wrote the USAW coaching manuals 20 years ago or so. The only difference is whether you begin the lift by holding that position statically first (from power position) or if you begin standing tall and move in an out of it as a countermovement (dip)."

Deb Werenko
I love this work with the power position and feel it’s invaluable to learn extension, but I continue to struggle with feeling the push under the bar. I tend to drop under. Any advice?
Deb - focus on keeping tension on the bar as you pull under, then as you turn the bar over, punch aggressively overhead and make sure your shoulders blades are locked in. You should have control over the bar the whole time.