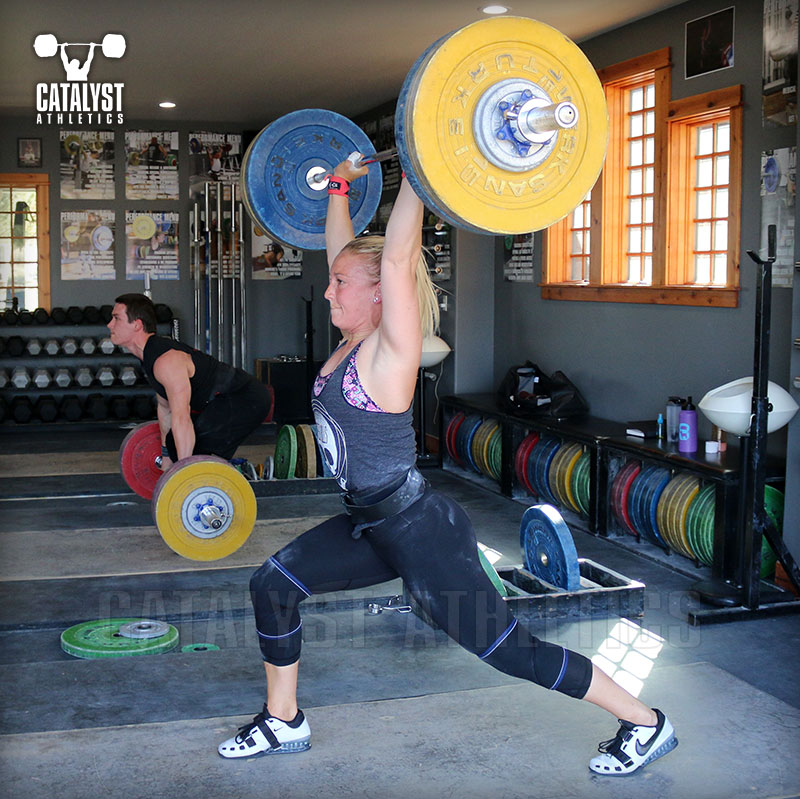 There are three styles of the jerk that rely on different receiving positions: the power jerk (or push jerk), squat jerk and split jerk. The split jerk is by far the most common competitive jerk style for good reason I’ll explain below. The power jerk has a great deal of utility as a training exercise even for lifters whom the split jerk is their primary style, and the squat jerk may be somewhat useful in certain cases as well.

The power jerk is named such because the receiving position is identical to those of the power snatch and power clean—feet in the squat stance and thighs above horizontal. (The name push jerk is often used synonymously for power jerk; the two can be distinguished by defining a push jerk as a power jerk in which the feet remain connected to the platform rather than being lifted and replaced.)

While the power jerk is a fairly common training exercise, it’s a comparatively rare competitive jerk style because of its greater demand on bar elevation relative to the split. The power receiving position is more difficult to hold than a split at lower depths because the mechanics of the knee are so poor as you near a horizontal thigh, so the receiving depth is pretty limited for most lifters (a notable exception is Apti Aukhadov, who receives close to a parallel squat). It’s far easier to support such a depth and knee angle in a split position, and to recover from it.

Additionally, there exists little margin for error in bar position—the bar must be driven quite precisely into position overhead in order for the athlete to maintain its stability. This becomes an even greater problem because the demand on overhead mobility is increased the lower you sit toward a parallel squat—a lifter is able to maintain a more vertical trunk position (i.e. less overhead mobility demand) in a low split position relative to a power receiving position of the same depth. This is why extremely immobile lifters resort to a split snatch rather than squat snatch.

The power jerk is a good choice for an athlete who naturally is able to drive the bar very high, has no problem putting the bar in a solid overhead position, and has consistently good balance in the drive. If you never have to get very low in your heaviest jerks, the split is unnecessary.

The squat jerk is identical in foot position to the power jerk, but as the name implies, the ultimate receiving position is a full depth squat. This clearly requires less elevation of the bar than the power jerk, but also introduces a few unique elements of difficulty. Mobility is an immediate limiting factor for most athletes—a relatively narrow-grip overhead squat is out of reach for lifters outside of the most mobile end of the spectrum.

Additionally, there exists the need for even greater precision in bar placement than in the power jerk—little can be done to stabilize a bar that is even slightly out of position when you’re in the bottom of a squat (in a power jerk, you have a greater ability to step to relocate your base under a misplaced bar).

Finally, consider the difficulty of recovering from the bottom of a close-grip overhead squat, often from a dead stop, particularly immediately following the effort to clean the weight. It is an extremely rare individual who possesses the mobility, precision and leg strength to make this jerk style successful. This is why it’s so rare, and also why it’s more common among Asian lifters who tend to possess shorter, stronger legs and good mobility.

There will likely be an increase in the frequency of squat jerking in coming years, particularly among the smaller weight classes, as coaches and lifters find that jerk weights cannot keep pace with increases in the clean, and find ways to better train lifters from the start of their careers to receive and recover from squat jerks more effectively. This will allow larger weights to be jerked without having to be elevated farther, much like the squat style in the snatch and clean allowed greater weights than the split, not by increasing the ability to elevate the bar, but by moving the body lower under it. However, the likelihood of the squat jerk taking over as the dominant competitive style is still small.

The squat jerk is appropriate for lifters who possess great mobility, leg strength and a consistently balanced dip and drive, but who are not able to elevate the bar well.

The split jerk is the most common style used by competitive weightlifters for very simple reasons—it allows relatively great receiving depth while keeping recovery from such depths relatively easy, accommodates much greater imprecision in the overhead position of the bar than the power or squat jerk, and provides greater stability in all directions than the power or squat jerk.

The split stance, at its most extreme in the jerk, allows about the same hip depth as a parallel squat. Such a position is extremely difficult in a power jerk simply because the knee joint is at its weakest position in terms of leverage, and this depth is the point at which the hips must be farthest back, meaning there is significant forward inclination of the torso and consequently huge demand on shoulder and upper back mobility. Additionally, an athlete can recover if necessary from such a split depth by wedging up under the bar through alternating between very small movements inward by each foot rather than being forced to simply drive straight up in a single effort. It’s rare that such depth is actually achieved, but the position will allow it.

The split also offers great stability in all directions by expanding the lifter’s base. The width of the feet is at least that of the squat, and the length is extensive. Such a broad base, particularly in the fore-aft direction, not only improves the immediate stability of the system, but allows for much more corrective adjustment to stabilize the bar overhead. That is, unlike with a power or squat jerk in which bar position overhead must be remarkably precise, the split allows the athlete to quickly and relatively easily shift forward and backward, and even to either side, in order to better position the support structure under the weight.

The split jerk is a good choice for just about everyone. New lifters are encouraged to learn, practice and train the split jerk until good reason is found to adopt another style. It’s unwise to give up on it early on because you find the split position tricky or have trouble driving straight up when you split—these things take time to learn. The power jerk may immediately seem easier (it’s simpler technically), but that simplicity won’t make up for the difficulties that become more apparent over time as you begin attempting bigger weights.

Conveniently enough, all jerk styles share every other trait beyond the receiving position. The dip and drive motion is identical—straight down, straight up, and bar slightly backward as it moves into the overhead position.

It’s worth noting here too that even the squat jerk requires elevating the bar. It may require less elevation, but the goal is not, like in a snatch balance, to intentionally limit elevation and get as low as possible to receive it—that’s just making an already difficult lift even more difficult totally unnecessarily. Watch this video of Lu Xiaojun and you’ll see his initial receiving position start out quite high (i.e. his squat depth when first locking out the bar overhead) and gradually decrease as the weight increases, just as you’d see in a snatch or clean.

Over time, each lifter will find the jerk style that will allow the greatest weights to be lifted and spend the bulk of his or her effort developing technical proficiency and strength in that style. However, all lifters would be well served to become at least moderately competent in all three styles; each will have value as training exercises, and experience with them will allow proper evaluation of their viability as the lifter’s chosen jerk style.

Sohee
Thank you so much for sharing your knowledge.
Jermiane Joiner
Great article...
Justin Escalante
Thank you for this article. Greg. The squat jerk has always fascinated me in how smooth some lifters make it. It’s definitely a style I’d like to experiment with, but know that the split jerk is definitely my mechanical style.