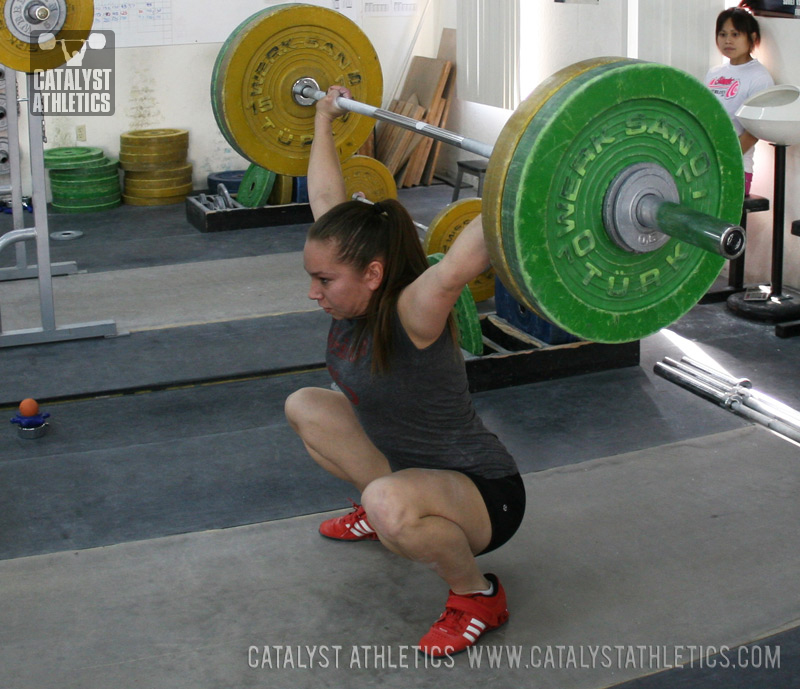 You probably don’t know this, but I have a weird combination of telepathic powers. It’s kind of like a blend of clairvoyance and extra-sensory perception. I can see into the minds of weightlifters and understand exactly what they’re thinking before they even say it out loud.

You remember Carrie, right? That freaky chick from the 70s horror flick? She could light stuff on fire just by thinking about it. I can’t quite do that, which is probably a good thing. A few people would spontaneously combust in the grocery store if I could. But I do have a special mental ability, like she did.

I know, I know…you don’t believe me. Fine, I’ll prove it to you.

You’re a weightlifter, and I know what one of your biggest problems is. I’ve never met you, never trained with you, don’t know anything about you. But I know something that’s going on in your mind. Hell, YOU might not even know about it. Here’s what it is:

I’ll give you an example in case that’s unclear. Let’s say you’re a lifter and you have a snatch PR of 90 kilos. When you’re progressing through a normal workout, you’re probably working your way up by snatching 50, 60, 70, 75, 80, 85, etc. Now, before you attempted all of those weights, you made up your mind that you were going to MAKE them. In other words, you approached the bar with certainty. Your technique was snappy and authoritative. Those weights were all well within your capabilities, and you knew the attempts were going to be successful. You expected to get the job done, so it happened.

However, you reached a point in the workout where you started approaching your PR. You expected to make 75, 80, and 85, but now you’re sniffing right around your all-time maximum weight of 90. All of a sudden, you changed the way you mentally approached the bar. Instead of deciding that you were going to MAKE the next lift, you started planning to just TRY it. And believe me, there’s a big damn difference in the way you move your body once this change has happened. Instead of putting your hands on the bar with the intention of dominating it, you’re now shifting your whole psychological perspective. You’re not entirely sure you’re going to make these top lifts, so you decide to “give it a try and see what happens” instead of “kicking the crap out of it.”

For some people, this only happens with weights above 90. Some athletes have the mental ability to equal their PR any time they want to, but the weights above the PR are the ones they’re going to just TRY. Others people start getting sketchy earlier, when they’re getting within 5ish kilos of their max lift. If they’re anywhere reasonably close to that all-time top number, they approach the whole thing differently. Their confidence gets soft and instead of attacking the bar with a search-and-destroy mentality, they allow themselves to simply…make an effort.

Some people openly admit to this. I’ve coached athletes who told me before a lift (or maybe afterwards) that they didn’t think they were going to make it. They didn’t plan to be successful, plain and simple. Others don’t confess that it’s happening, and they might not even truly know that they’re doing it. It stays in the subconscious, but it’s still having the same effect.

And I know some of you are turbo samurai ass-kicking maniac machines, so you’re saying to yourself right now, “No way!! I don’t do this!! I’ve never attempted a lift without complete confidence that I was going to make it!! I don’t feel fear!! I’m bulletproof!! I’ve got tattoos!! I never get mentally rattled!!”

Gotcha, I understand. The normal rules of human behavior don’t apply to you. Everything about you is special, and better than the rest of us. So you don’t have to fight the mental battles we mortals are up against. If that’s the case, please stop reading this article. Go kill a panther with your bare hands or whatever you do in your god-like personal life.

Sarcasm aside…did you notice how I described this problem as “normal human behavior” a second ago? That’s exactly what it is, brothers and sisters. If you’ve got these tendencies, where you have certain weights that you plan to MAKE and other weights that you’re only going to TRY, it doesn’t make you a bad person. It doesn’t make you weak, or cowardly, or inadequate. In fact, it doesn’t make you different from any other weightlifter in the world. I was a pretty successful athlete, and I can positively admit to you that I had several struggles with this throughout my career. I’ve also trained with some of the best competitors in the entire sport, and they’ve told me the same thing. You know those champions you worship? Those are the people I’m talking about.

I’m not going to mention any names here, but I was at a national championship back in the 90s where one of the top weightlifters in the United States attempted a new American record in the C&J. He failed with the clean…didn’t get the record. Later that night, we were having some drinks in the bar and I asked him, “What happened on that record attempt?” I’ll never forget his answer. He said, “The weight freaked me out a little bit. I kinda got scared of it.”

Yep, you heard that right. By the way, this guy went on to break the record later that year, and eventually he lifted ten kilos more before he retired. He also made two Olympic teams and solidified his name as one of the best we’ve ever had.

He fought the same battle you’re fighting. So don’t get too down on yourself if I just publicly discussed your biggest mental challenge.

How did the Olympian guy break through his mental barrier? What did he do that allowed him to move up to a higher level of performance? He did the same thing I had to do, and it’s the same thing you’re all going to have to do.

He just kept trying. Obviously he used sensibly planned training, made technical improvements, changed things when they needed to be changed, all of those essential components a competitive athlete has to manage to be successful. But once those pieces were all snapped into place…he just had to keep trying. Same as you.

See? I told you I could see inside your mind.

Amanda Chan
I liked this article. Put my newbie mentality into words. Thanks!
Jean-Benoit
True that...
Flash
So true. Recently made 3 attempts at snatch PR. The first two I was scared and failed. On the 3rd I said f-it and attacked it, not surprisingly made the 3rd lift. This is an every day battle for me...thanks for helping me relate to other lifters here.
Tim
There is something about feeling "convicted" on the way to the bar. Enjoyed this article so much- I'm gonna DL Bones of Iron to my ipad right now!
PatG
This article immediately makes me think of the articles on squat/deadlift/snatch/clean n jerk ratios. Why? Because before I approach the bar to lift, I know whether or not I am capable of lifting it based on what I can squat, and what I can triple or double for sets in training. I know I need to work on my snatch, and have been, but I know when I approach the bar for a PB that I am strong enough to do it, and based on everything I've done in training I am confident that I can. That doesn't mean I always do, but my determination and confidence goes a long way most of the time.
Colin Rigney
"I don't think I'll make it but I'll try"-----I think I've heard that one before......
Terrry Beers
Great article Matt. You understand.
Mickis
You just read my mind. Happy to be human after all!
Andy W
I've had the opposite effect when accidentally loading 25kg plates on the bar, thinking they were 20kgs. Did a set of 10 with what was normally the weight for 5 across thinking 'bit difficult today' and there was my 10 rep PB without me even thinking about it. It is sooooooo all in the mind!
Colin Dore
Whatever, dude. I have no time for all this hippie-talk, I'm gonna go kill me a panther!
Jonathan Sparkes
I've only been lifting 10 months, and although my 75Kg snatch (BW 72kgs) is fairly good, I am terrified of 1) pulling that kind of weight off the floor 2) throwing it over my head and 3) deliberately pushing my entire body directly underneath it with only the hope that my catch is spot on. Its a confidence thing, and something I need to work on if I am to go heavier, considering my ful squat 1RM is 120, I know I can do better. Great article Greg, thanks.
Matt Foreman
Thanks Jonathan, it's my article.
Chris
The movie was Firestarter, it was from 1984, and the kid was Charlie (Charlene). Couldn't stand it, sorry! :) Carrie was 70s but had different powers.
Laone Molete
The dreaded snatch.....

I have about a year and seven months doing olympic weightlifting and everytime I see snatch in a training program my mood goes down.....power clean,clean I get fired up I just want to do that with my snatch....
FJ
So I recently (as in a week ago) finished the “Kara’s 9 Weeks of Heaven” cycle. After week 3 or 4 I was starting to feel really good and by week 7 and 8 I was feeling like a monster! I was hitting all of my 85%-95% with total confidence. I wanted to just go for PRs right then but this was my first time doing a strict weightlifting cycle with no Crossfit and I had followed this program to a T and it was obviously working so I didn’t mess with it. Then deload week rolls around and after a week of light weights and recovery Max day finally arrives and wheels just freaking came off! Everything I pull off the ground feels it’s sitting in tar. It was so damn heavy and I started to get scared. I could feel it when I went to grab the bar my heart was racing and my arms felt like noodles. I tried to reason with myself, just a week or so ago I had hit these same numbers with ease but it was to no avail. I ended snatching 125# (-10) and C&J 155# (-10). Honestly I was devastated. I haven’t PRd any of my lifts in over a year and I was hoping this was gonna be the thing that pushed me over the line. I was expecting to hit 140#-145# on my snatch and 170-175# on my clean and jerk but mentally I just fell apart. I'm thinking about doing the double day squat program starting in July in prep for a comp in October. I figured since it goes by feel that it will give me a chance to go for those PRs on days when I'm feeling like a beast instead of hoping that the stars align at the end of a cycle on max day.

I love the tips on how to mentally approach the bar. Any advise for an athlete that loses her confidence after reloading? Its like if I don't hit on those higher percentages frequently I start to think I've lost it even after just a week. This has happened to me in the past too.
FJ
Deloading not reloading
Kim Armstrong
This is an amazing article, thank you. Now I will be more conscious of my mindset before I make my big lifts