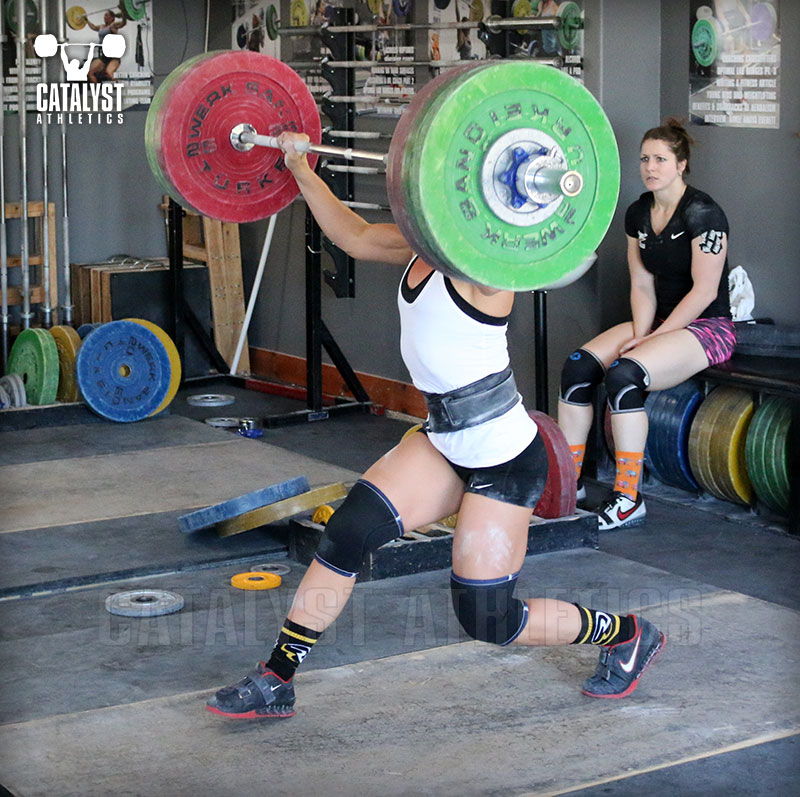 I’ve always thought that one of the most frustrating things about being a weightlifter is that you can lose your technique.
Let me explain what I mean when I say “lose your technique,” although anybody who has been an Olympic lifter for any extended time period already knows exactly what I’m talking about. So…you’re learning the snatch and the clean and jerk, which are probably two of the most difficult skills in any branch of athletics. You’ve been training for a while, you’ve put in hours, days, months of work, and then you FINALLY get to a point where you start to nail your lifts correctly. The movements feel natural, you’ve locked in on a set of mental cues that get your body to do the right thing, and everything just seems ten times easier than it was when you started. The weights feel light! You’re sharp and snappy! This is freakin’ awesome! Your coach is pumped, all the other lifters in the gym are impressed, and your heart is filled with high-octane warm joy because you no longer feel like the maggot of the gym. You busted your butt to master the technique of these lifts, and it finally happened. Praise the lord and pass the ammunition.
Great…good for you…now guess what?
Believe it or not, there are going to be times when you feel like you’ve gone backwards. That effortless feeling you had when you started nailing your lifts correctly? Yeah, that’s gone. For some %$#&!ing reason, your technique feels like there’s something wrong with it. You’re jumping forward, not timing your turnover effectively, swinging the bar out in front of you, something like that. And it doesn’t make any sense because you’ve been training hard and doing everything you’re supposed to do this whole time. You had your technique straightened out, everything was smooth and consistent, and now it’s back to being cruddy and awkward. You’re going to the gym and missing weights that you were making easily two months ago. And your anger level? Baby, “angry” isn’t even the right word to describe it. You kick things now…really hard. You’ve invented new combinations of cuss words that nobody has ever heard of. You feel like you truly understand clinical depression for the first time in your life.
Listen, this is the life of a weightlifter. It’s probably the life of every athlete, if you want to know the truth. There are going to be times when you take a step backwards. And it doesn’t make any sense how you can go backwards when you’re training as hard as you can. It seems like you should only go backwards if you’re being lazy and slacking off. But weightlifting isn’t like that. Because of how challenging the Olympic lifts are and the fact that you’re trying to perform them with maximum weights, there will be some times when your body feels like it’s losing the rhythm of the lifts. Even if you’re an experienced veteran, you’ll still have times like this. If I had an easy, guaranteed solution to fixing it, I would tell you. Actually, I wouldn’t tell you. If I had an easy, guaranteed solution to fixing this, I would charge money for it. I’m pretty sure most serious lifters would sell their first-born for the solution, so I would be cashing in like Seagram’s Gin.
Why do you think Olympic gold medalists go crazy on the platform and start jumping around and screaming after they make a huge lift? It’s because they’ve gone through all of this crap multiple times. They’ve had perfect technique, lost it, and then had to fight like hell to get it perfect again. How did they do it? As I said, there’s no magic formula. But I can almost guarantee that you need to back off the heavy attempts for a while, get some quality video analysis, and work with weights that are light enough for your body to re-master the movement without the mental stress that goes along with hitting maximums.
You’ll get it back, don’t worry. We’ve all been there. So take a deep breath, put down the knife, and go watch some weightlifting on YouTube. I can guarantee you’ll find some wacko on there with worse technique than yours.

Coach Cano
Great article. Really great. I'm actually at this point right now. I've had to back off the heavy weight because for some stupid reason the technique is not cooperating. Well, turns out after hours of video analysis there are technique flaws in my lifts that need to be addressed. What is the solution? As you mentioned, back off the heavy weights and work with a weight that allows you to recorrect and learn the more efficient technique. That's what it takes.
Alisha
I have been there and back many times and although I know these ebbs and flows come, I still get frustrated like it's the first time. Once in a while I look at people who never get angry about their workouts and envy their reaction, wishing I could just brush it off. But, I love it and I can't. Much thanks to my boyfriend and my Coach who talk me off the ledge every time.
Darren
Fun article to read, and is so true. We call it 'Riding the Wave,' or something lik that: when you're on top, love it, play, go for all you can, but know as the body changes and adapts, awareness shifts, and things change. When that happens, and the wave has met the shore, it's time to take stock, regroup and relearn Waiting for that next way to come with dark clouds looming can be, though. That's the laws of inevitability say, 'have faith, son. The next one is around the corner; but only if you stay out there and work for it!' Cheers for the article.
Jay
This article makes me feel better! Although the Olympics are not in my future I do work hard on the lifts. It always frustrated me that even though my strength was increasing, there would be times my lifts would back slide and it would upset me to the point of wanting to quit them altogether. This article puts things not perspective and gives me a blueprint for resetting and going again.
Nate
Am I the only person who sees the similarities between golf and weightlifting? I feel like the peculiarities of a golf swing and snatch draw a perfect comparison in terms of frustration to learn/perfect.
Andy Singh
Definitely needed to read this after a break away from Crossfit. My lifts aren't as good as they were but I'm sure if I keep at it, I'll be back to my best.
Kim
Thanks! I needed this today.
Boon
Thank you for this article
Steve
Have you guys been reading my mind!? Perfect article - in a slump right now. Laughter always helps when I'm lifting like a sack of shit.