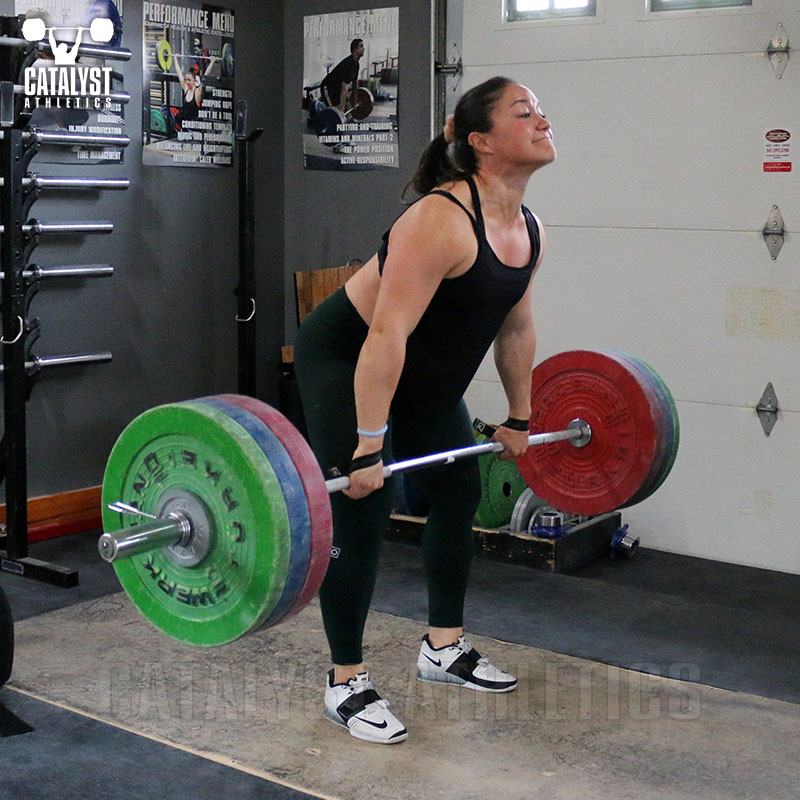 See more articles & videos like this in the collection.
The purpose of straps is to allow us to lift more than we could without them, both in terms of weight and volume. The trick is using them to our advantage and not to our detriment.

For a lot of lifters, using straps will immediately allow them to snatch heavier weights, and often to move visibly faster. This is pretty seductive… the problem is that nothing changed about their ability other than grip security, and that security is attached (so to speak) to those straps. In other words, remove them and the lifters are right back to where they started.

That said, we can use them wisely to allow us to train in away that builds the qualities we’re looking for better and faster—qualities that we’ll be able to apply to the lifts without straps.

Generally speaking, straps can and should be used for pull and deadlift variations to ensure that the grip doesn’t limit training of strength and maximal speed. If the grip is insecure, the body won’t allow us to accelerate maximally in pulls, or to move the way we want—or at all—in heavy deadlifts. It will shut down the attempts to try to avoid catastrophic failure, i.e. dropping the bar.

For this reason, straps are commonly used for all pulling work—we’re making sure to train pulling strength and speed as well as possible.

Exceptions to this are for new lifters or lifters whose grip is lagging in development; in these cases, as much work as possible should be done without straps to push grip strength and stamina.

One of the fundamental qualities new lifters need to work to develop is grip strength and stamina along with general hand durability. There is absolutely no need to beginners to use straps even for pulling—they’re not operating anywhere near their physical limits because what’s limiting them at that stage is technical ability and/or mobility. This is the time to avoid straps and even to go without the hook grip in as much of the pulling and deadlifting as possible without compromising proper movement or speed.

For more advanced lifters who have developed a relative lack of grip strength that’s now holding back their performance (for example, training with straps too much for too long), the principle is the same, but we have to be a bit more judicious. We can’t simply not let them use straps for anything—it would limit the weights they were handling too much and cause regression in other qualities. The goal is to bring the grip up to meet the rest, not sacrifice the rest.

Incrementally reduce strap use. For example, don’t use them with RDLs/SLDLs where there’s no acceleration to deal with and loads are lighter than most pulling will be. Start doing as many sets of pulls and deadlifts without them—for example, start with no straps on warm-up sets. Then work to be able to get the first of the day’s working sets without, etc. Partway through this process, try doing the warm-ups with no straps or hook grip. Again, be cautious of doing too much reduction too fast and harming the execution of pulls—we want to preserve the same movement and speed.

These lifters (and beginners) should also be incorporating direct grip work into their programs. Once grip strength has caught up, maintain it with judicious strap use, e.g. not using them in competition lifts and continuing to forego them for some pulling work.

I recommend never using straps in cleans, both because it’s an injury risk if you miss since they’re harder to release in a clean than in a snatch, and because it shouldn’t be necessary. The narrower grip of the clean means more grip security than in a snatch, and if you know how to lower a clean, you should be able to reduce the work for the grip considerably.

I prefer they be used as little as possible in snatches as well. When doing multiple-rep sets from the hang, it may be unreasonable to not use them once you’ve reached certain weights, but work on developing your grip strength along with everything else, including how to lower them well, and you’ll be able to do an impressive amount without straps.

Using straps when snatching from the floor should be restricted to only some sessions when training multiple times daily and with very high volume. In these cases, straps will help prevent the hands from being overworked and damaged and allow you to do your heaviest snatching without them. For example, use straps in your morning session with powers or lighter variations, and then snatch from the floor in your afternoon session without them. You may also rotate them into your heaviest snatch days if appropriate (e.g. trying to preserve ability while bringing up lagging grip strength)—for example, using straps every other or every third heaviest snatch day of the week. This approach will help keep your hands healthy and your grip strong.

It should go without saying, but I know better, that beginners should never use straps in any competition lifts or variations. Beginners don’t even need to own straps.


See more articles & videos like this in the collection.