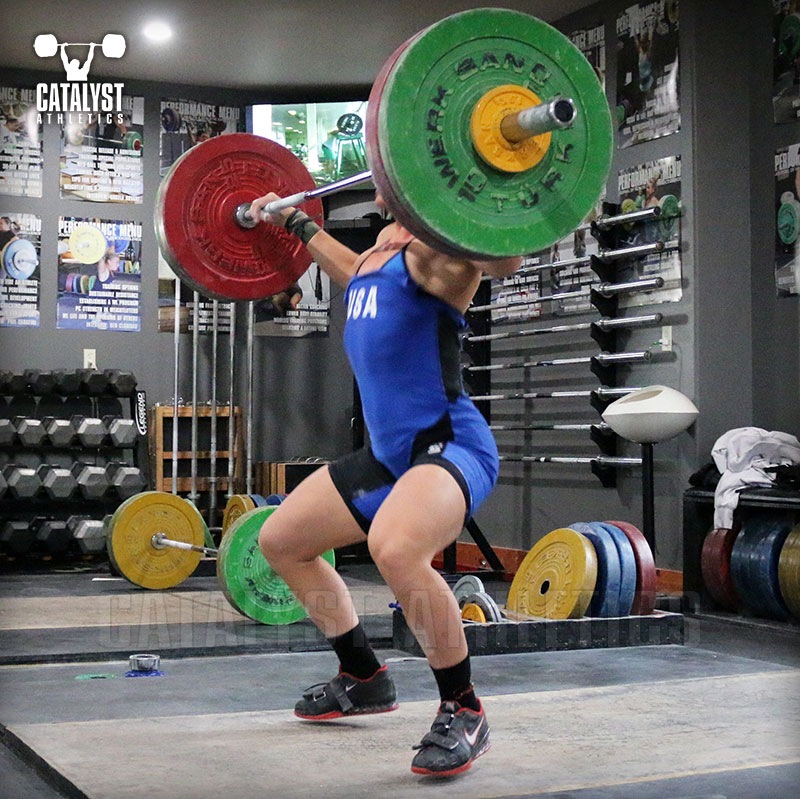 Tony Asks: I'm one of the coaches for and a competitive member of the Leadville Lifters weightlifting team in Leadville, CO. Over the past few months I've had the privilege several times of watching our National Olympic team train at the Olympic Training Center in Colorado Springs and I was able to train with them once, which was a great experience. It seems that our National Team coach, the great Zygmunt Smalcerz of Poland, is teaching the "foot stomp" when transitioning from the pulling position to the receiving position because all the athletes at the OTC stomp with extreme force and noise on every lift. Though I have never gotten the chance to ask Zygmunt specifically if he teaches this. In your book Olympic Weightlifting: A Complete Guide for Athletes & Coaches, you state that the foot stomp is an error and a technique that should not be taught. So, my question is: if the foot stomp is being taught and used by our US National team, is it really such a glaring error that should be corrected? And if so, why do you think that such an error is being promulgated at the highest level?

Greg Says: I think I can clear this up for you. First, what the lifters at the OTC do is not always the result of what Smalcerz teaches or believes to be correct. Remember that this group is comprised of athletes who were all started by other coaches and bring with them to the training center practices and habits that may not align with Smalcerz’s philosophies. So even if you see the lifters there doing something, it doesn’t necessarily mean it was taught to them or encouraged by Smalcerz.

Next, let me clarify my thoughts on the stomp because it sounds like what I wrote in my book wasn’t as clear as I thought. Here are two excerpts from the book:

“…the athlete will transition the feet to the receiving position as rapidly as possible with as little elevation of the feet as necessary, landing with flat feet at quarter squat depth. This transition must be aggressive and the reconnection of the feet with the platform may produce an audible clap. Note that this clap should be a product of speed and viciousness, not of elevation.”

“…elevation of the feet from the platform should not exceed what is necessary to allow unobstructed lateral movement, but must also remove pressure against the floor to provide opportunity for maximal acceleration of the athlete under the bar.”

Ideally, the lifter does in fact make a stomping sound because he or she has lifted and repositioned the feet aggressively and reconnected them flat against the floor—however, this ideal movement doesn’t necessarily include excessive elevation. In other words, I want zero pressure against the floor as the lifter begins moving under the bar to allow maximal speed of that movement; I want the feet totally disconnected to allow proper repositioning in the receiving position; and I want that all done without lifting the feet higher than necessary, simply because the longer the feet are in the air, the more chance there is of improper positioning, and if there’s a delay in reconnection with the ground, there is more chance of the bar crashing down onto the lifter rather than being absorbed with more control.

I don’t object to greater elevation than what might be considered absolutely necessary to achieve these things as long as it’s not creating any new problems. Similarly, I also concede that certain lifters legitimately do better without lifting the feet at all. I would argue, though, that they’re the exception, that this method is more difficult to optimize, and that it’s something that should be developed over time after having learned and practiced the lifts with an actual elevation of the feet.

In short, I do believe it’s “correct” to lift and replace the feet during the pull under; it just needs to be done well, like every other part of the lift. Lifters can be very effective with what appears to be excessive elevation of the feet (typified by many modern Russian lifters), and they can also be effective with the feet remaining very close or even never leaving the floor (typified by many modern Chinese lifters). Much of this is the product of individual peculiarities, but I will always teach a lifter to lift and move the feet in the pull under and only change that if that lifter proves to be one for whom this isn’t ideal.

You can read more about foot movement in the articles listed below this one.