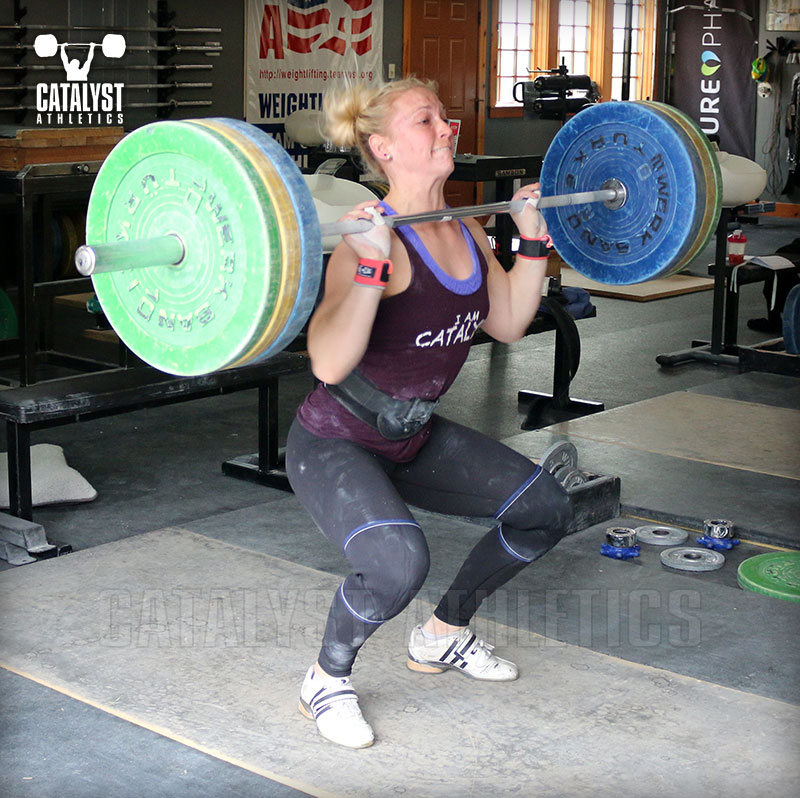 Patterns and consistency appeal to me. I like being able to look at something and quickly see the internal logic. This goes for training programs—ordinarily, I want to be able to look through a program and be able to understand what’s happening without a Rosetta stone or a conference with an oracle.

This doesn’t mean that an absence of an easily recognizable pattern means an absence of a plan or logic. For example, a program doesn’t necessarily need to mirror for the clean everything done for the snatch, e.g. use the identical classic lift and pull variations in a given week. A difference in these things may reflect a difference in a given athlete’s needs for the two lifts.

However, the kind of consistency I’m talking about here is week to week in the program—that is, the program uses the same (or very close) exercises for 2-4 weeks at a time, with the only changing elements being the intensity and possibly reps and sets. I most commonly write programs in this manner, and this is certainly the most common method in the sport. Each mesocycle (typically 3-5 weeks) will look essentially the same week to week—Monday’s workout on week 1 looks just like Monday’s workout on week 3, with a difference of increasing/decreasing intensity primarily or exclusively. The exercises will then change at least slightly in subsequent mesocycles—for example, you may start with hang or block lifts for triples, then move to complexes from the floor, then the floor for singles.

There are a number of good reasons to program and train this way. First of all, the lifts are skilled movements that improve in proficiency and consistency with practice. If you were learning to play the piano, you would likely practice the same scale repeatedly over a period of time rather than practice a different scale each day prior to mastering any of them. Getting repeated exposure to the same lifts for a few weeks at a time allows the lifter to get the most out of that skill practice element to improve technical proficiency not just in that training cycle, but long term.

Consistent exposure will also reduce the fatigue of the lifts to some degree by preventing the body from having to adapt to a totally new stimulus and limiting that need for adaptation to intensity and possibly volume. This typically means intensity can be progressed more quickly and reliably week to week when compared to changing exercises that could be considered equivalent in terms of difficulty and demand. It also means reduced or completely absent soreness, which means generally better movement, speed and mobility day to day (and even less complaining in some cases).

Finally, this kind of consistency will usually allow a lifter to progress more easily to the ultimate goal of a given mesocycle. For example, if the goal at the end of week 3 is to achieve new PR triples in the snatch and clean & jerk, having done 2 progressively more intense weeks of triples leading into that testing week will prepare the lifter well for this. Those of you who use my programs regularly have probably noticed this pretty obvious pattern in a lot of them—working up the first 3 weeks of a mesocycle to maxes and then backing off the fourth week. Simple but effective.


A Various Variety of Variations

So what about variation instead of consistency in exercises week to week? I’d argue that it has its place occasionally.

What I’m talking about here is changing the exercises used with every exposure. Let’s say Monday is a squatting day. That means every Monday, you’re using a different squat variation than the previous weeks. The first week you may do back squats with chains for sets of 10; the next week you may do alternating sets of front squat triples and max rep back squats with the same weight; the following week you may do pin front squats at parallel for sets of 5. Both the lift itself and the rep scheme are different, even if they follow a broad pattern, e.g. for three weeks you’re squatting in the 6-10 rep range. You may even be more specific and say it has to be a back squat variation. But it’s never the same thing twice.

This approach is not appropriate for newer lifters—they need consistency and skill practice. Variety day to day is good—getting exposure to and practice of a number of lifts and variations like hangs and powers—but week to week, consistent exposure will help these lifters develop technical proficiency and consistency.

This kind of extreme variation makes sense for lifters who are technically proficient and whose progress has really stalled. They don’t need consistent exposure to the same lifts for practice—they can snatch and clean & jerk about as well as they’re ever going to. What they need more is some kind of disruption to routine to get things moving forward again.

You can also use a hybrid approach with an athlete who doesn’t quite qualify as fully proficient and consistent in the competition lifts, but who seems to need something radical to get moving again. The full-meal-deal variation can be used with strength work like squatting, pulling and pressing variations (and accessory work), while maintaining consistency with the competition lifts and their variations for the duration of each mesocycle.

In this case, you would use snatch, clean and jerk variations chosen intentionally to address the needs of the given athlete and the timing of the training cycle, using the same ones for the entire mesocycle and building intensity progressively, but vary the strength lifts in that same period with each exposure, although following the basic plan of the cycle, i.e. beginning with higher volume and lower intensity and working toward higher intensity and lower volume. That said, if the idea is to really push the strength, a good way to go is to work to rep maxes and do back-off sets the entire mesocycle other than back-off weeks. Because the lifts are being continually varied, this won’t beat you down quite as much as it will when performing the same lifts for multiple weeks consecutively. A simple method for this is the one used by Dr. Kyle Pierce—work to a rep max, then do 1-2 more sets after using between 90-95% of that max.

If you or your lifter is stuck and you’re scratching your heads down to the bone, give something like this variation a shot and see if you can bust something loose.

2 Comments
Eric Meneses
Your knowledge is gold for a lot of us as athletes and coaches! Thank you so much for all you share... it's priceless.
Regards from Colombia.
Roberto
I can not get good results doing the so called Blocks of strength, or blocks of speed, blocks of hyperthrophy or whatever. I spend my whole time training in a pre-competition phase, at least this is the only phase I know that I can go anywhere with my results. I really don't know why my body only respond with this kind of training. It could be more fun doing all the arsenal of exercises, but this way don't work for me.