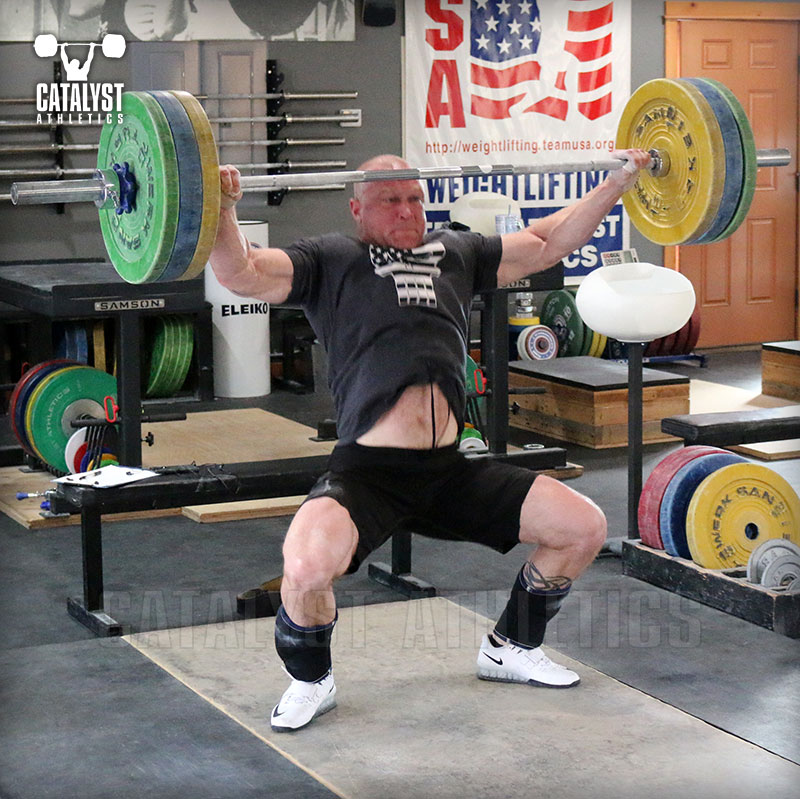 This article is aimed at people over the age of 35 who have recently started the fun journey of Olympic weightlifting. Throughout this, I’m going to give you some insight and tips to help you out on your pursuit of starting a sport where—let’s be honest—by the time most people have hit your age, they’ve retired from it all ready. As much as you don’t want to admit it, you’re old and this sport isn’t exactly set up for aging athletes.

So already I’ve pissed off a bunch of masters lifters, but before you start drafting your nasty response about how you feel so good and age is just a number and all of that crap, be honest with yourself and admit the fact that weightlifting would be a little easier if you were 20 rather than 40. I’m sorry, but it’s true. It’s called aging, and not many things do it well. In the end, everybody breaks... IT’S BIOLOGY.

I started weightlifting about a month out from turning 34. I had always been in a gym before that, but I honestly didn’t know much about the Olympic Lifts because there was about 5% on the internet about them then as there is now, and crazy enough, that was in 2006. Fortunately for me, I lived about 15 minutes away from Mike Burgener, found him on the internet in that 5%, and have been thankful ever since.

In the 11 years since, I only started to compete as a master in 2016. Prior to that I stayed as a senior lifter—I figured if I stayed with the younger guys it would push me harder. I feel it did, but it also came with a price. I qualified and lifted in three American Opens—one as a 94 and two as a 105. My goal when I started was to qualify for one of the two National meets, and I was able to accomplish that. Aiming my sights high I believe kept me going through the lean years, and trust me, there were plenty of those starting out. In 2016 the totals climbed up even higher and with the challenges of working my full time job, running a barbell club and having a wife and kids, I felt moving over to the Masters class was the right move… well that and the fact I was 44.

Okay enough about me and my nonsense. Here is what you are actually reading the article for.

What you have working against you:

What you have going for you:

So in summary, you found weightlifting at an age that isn’t ideal for this sport, but who cares? Do what you can with what you’ve got, and just make sure you train the way you can, not the way someone else can. You have many advantages to help you along the way, but you do have limitations that you need to acknowledge.


6 Comments
Martin
Thanks Mike, I just started lifting at age 43 and I know the feeling, joints are getting older and take more time to heal... I trained heavily in the past as a swimmer and feel I should be getting better faster at weightlifting (because of the athletic past I have) but that so-called wisdom we acquire with age should help keep us back a little and keep more time for warming up properly... have a good one!
Nick
I'm a 44 yr old lifter and I fully agree with this article. I notice that my body requires longer warm-ups and warm-downs along with eating relatively healthy and absolutely getting quality sleep every night. It is all those things I could get away with 20 years ago compared to now. Keep lifting brother!
Geoff Rock
I came to Olympic Lifting from Rodeo a few years ago. Guys over 40 shouldn't be riding bulls anymore. My training partner is this tripped out 50 something that has been lifting for 40+ years yet stopped competing over 25 years ago. He taught me to do the split first until I was able to power snatch and squat clean. Crazy sport isn't it? Just wondering what kind of music you older lifters like? We listen to Electric Moon, My Sleeping Karma, Bad Liquor Pond and Elephant Stone. Like I said, this guy is tripped out.
Andrew
Greg. Love your content, youtube channel and instructional videos. I am that guy at 36 who was introduced to the lifts through CrossFit and have now transitioned to Weightlifting as a primary sport focus. I have started competing at local meets, and as a Masters lifter you are spot on with all of your points. Your experience of starting as a Masters lifter is motivating. Might not make it to Nationals, but there's hope! Thanks, as always, for your perspective.
Linda Jo
Great article. All so pertinent. I started when I was in my 40s. Still love it but realizing less is more. Functional fitness and ADL is my priority.
Suzanne Lenz
Ah - I started lifting at the age of 50. While I wasn't cursing myself for not doing this sooner I made strides I never thought possible. But it's sad & true - age is not your friend in this sport. At 62 I try to lift in between the various calamities of aging - and I'm not talking just about physical. The mental are worse such as losing your spouse. Lifting is all that is keeping me alive no matter how shitty I am at it now. And now I whine like a baby - I figure I'm entitled, no longer care who's watching, who's judging me. Just keep lifting my friends, even if only for yourself.