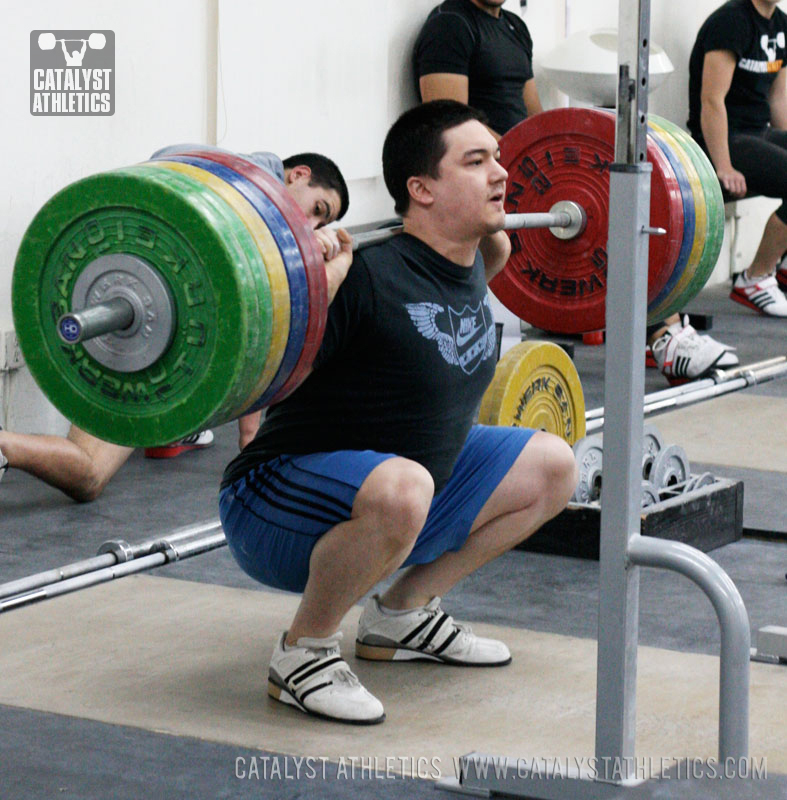 See more articles & videos like this in the Weightlifting Squat Technique collection.
The squat is foundational to the Olympic lifts as a position, a movement and a strength exercise. Without a well-developed and consistent squat, neither pulling technique nor pulling power will produce entirely successful Olympic weightlifting. The great natural physical variation among athletes dictates that there will never be a universally perfect prescription for body positioning, but irrespective of this variation, the fundamental principles remain consistent. Continued reliance on them will ensure that modifications from the strict prescription are rational and sound instead of haphazard and likely improper.

Because the squat, more so than any other element of the lifts, will be affected by temporary impediments such as limited flexibility, a greater deal of modification will be necessary and allowable during an athlete’s advancement. However, even in the cases of lifters for whom the strictest positioning prescription is initially impossible, this prescription will remain the ultimate goal, and continued efforts toward that end should be made.

Be cautious of defying the underlying principles with the excuse of individual variation—often this is inappropriately cited when the actual cause of an athlete's inability to adhere to these prescriptions is entirely correctable over time, such as flexibility-related limitations or simply stubborn habits. It's necessary to critically evaluate each athlete individually to make accurate determinations—avoid allowing an athlete to continue poor habits due simply to laziness or frustration with slow progress and, more importantly, increase the risk of injury.

The depth of an Olympic squat should not even be a topic of discussion, but because there has been and continues to be discussion among coaches and athletes in sports outside of weightlifting, it warrants at least clarification: proper depth is full depth; full depth means full depth. That is, full depth is not parallel, nor is it breaking parallel—it is squatting to the lowest position possible without surgical alteration of body parts while maintaining correct posture. To simplify, we want to close the knee joint maximally while maintaining a correctly arched back.

If the knees are prevented from moving forward over the feet, as is taught by many coaches and trainers, the hips must travel farther back behind the feet. With the hips behind the athlete’s base, the torso must be inclined forward to a greater degree in order for the athlete’s center of mass to remain balanced over the feet. If the hips are lowered from this position, flexibility will restrict the spine’s ability to remain correctly arched, forcing the athlete to curl forward, again to remain balanced. For what should be fairly obvious reasons, neither of these positions will allow the safe and effective support of a barbell in the positions it must be received in the snatch and clean. (Note that very short-legged athletes will be able to achieve a proper squat depth and position without the knees passing significantly forward of the toes.) Moving the knees in front of the toes is not a goal itself, but something that must be allowed to happen in order to achieve the depth and trunk orientation we need.

Inadequate ankle flexibility can also result in the knees remaining too far back—if the ankles are unable to dorsiflex to a great enough degree, the lower leg cannot reach an angle sufficient to bring the knees into a position that allows the hips to reach their intended placement. This is the reason for the lifted heel of weightlifting shoes—elevation of the heel effectively increases the ankles’ range of motion.

Femur length will affect the depth of each athlete’s squat simply by dictating how far away from the knees the hips will be. Athletes with great flexibility and long femurs will display extraordinarily deep squat positions, while their shorter-femured counterparts will appear higher even when at their maximal depth. For some athletes, femur length will exceed what can be compensated for through ankle flexibility in the basic squat position, and adjustments will need to be made to allow a better bottom position.

For individuals with largely muscled legs and who are capable of very upright torso positions in the bottom of the squat, the hips may not be particularly low relative to the knees even when the knees are closed completely.

As the base from which all movement and positioning originates, the placement of the feet will dramatically influence the squat. The width of the stance and degree of external rotation will affect the movement and position of the hips and back, and will often be the deciding factor in whether a squat is successful or failed, mechanically sound or injurious. Individual variation notwithstanding, the feet must be positioned in a manner that allows and encourages proper biomechanics of the legs, hips and back, while allowing the greatest possible range of motion and supporting the unique positional and movement characteristics of the Olympic lifts.

Anthropometrics—in particular relative leg segment lengths—and hip anatomy will dictate appropriate width and rotation of the feet. Flexibility limitations and similar impediments may prevent an athlete from immediately achieving this ultimately proper positioning, but again, these are temporary obstacles that should be corrected.

The starting foot placement will be slightly outside hip-width at the heels with the toes turned out comfortably—generally between approximately 20-35 degrees from center. With the athlete sitting at the bottom of the squat in this basic position, adjustments can be quickly made according to leg segment and trunk lengths, hip anatomy, and ankle and knee alignment to place him or her in the proper position.

From here, there are two basic criteria with which we’re concerned: When viewed from directly above, the foot and thigh are approximately parallel with each other; when viewed from the front of the toe, the foot is approximately underneath the knee. The hips should sit in between the heels somewhat; in other words, the heel will not be directly under the thigh, but slightly outside of its centerline. This positioning will keep the knees and ankles aligned well, but will also allow for slightly improved depth, and, more importantly, a more absorptive bottom position—that is, the final position will be structurally sound without having an abrupt and jarring stop.

With these relationships established—assuming the hips are at full possible depth—the remaining positional relationships will be unavoidably correct. This allows for a wide range of potential external rotation—athletes will in general naturally find what is most comfortable for them. That said, some athletes will need to be told explicitly to spread the knees farther than they wish; occasionally athletes will prefer a stance that prevents the hips from reaching adequate depth between the thighs due to the structures of the upper thighs being pushed into the forward edges of the pelvis. If the athlete is unable to achieve adequate depth and back extension, particularly if he or she is also feeling pressure near the front of the hips, a more externally rotated stance is more than likely needed.

What this positioning achieves is simple but important—biomechanically sound alignment of the involved joints, optimizing performance and reducing the risk of injury.

These relationships of the feet and leg segments should be maintained for the duration of the movement—in other words, the knees should follow the line described by the angle of the feet as the athlete descends and recovers. For many athletes, this will, at least initially, require they consciously make an effort to push the knees out to the sides as the tendency will be for the knees to collapse inward.

From this basic position, there will be a degree of adjustment possible without considerable violation of these relationships. That is, once in this starting position, the athlete will find he or she can move the feet in and out and turn the toes in and out slightly and continue to meet the criteria fairly well. This small range will allow some latitude for personal preference, and the lifter is encouraged to experiment within this range until the most comfortable position is found.

The foot position should be identical for all squat variations—back squat, front squat, overhead squat—and all receiving positions except the split in the jerk—snatch, clean, power snatch, power clean, power jerk, squat jerk. Many athletes will assume different foot positions for each type of squat—this is an indicator that the athlete has not learned and developed a correct squat position, and is likely in need of improved flexibility.

Read more about the Olympic squat in Olympic Weightlifting: A Complete Guide for Athletes & Coaches by Greg Everett


See more articles & videos like this in the Weightlifting Squat Technique collection.

john wells
good article. thanks.
Alex
How much more information does the entire article have?
Greg Everett
Alex- 5 8.5x11" pages.
Leo
When you say "hips between heels," do you mean inside or middle of heels?
Greg Everett
Leo -

I mean that rather than being stacked perfectly vertically, the feet are very slightly wider than the hips, so that the hips are between the heels rather than directly on top of them.

Courtland Creekmore
Great example of upright posture on the picture. In your opinion what the most common fault that results in an overly-forward lean? Thanks
Pedro Farah
My lower back arch breaks when I get below parallel. I have long femurs (as long as my torso) and when I squat deep my butt tends to shoot backwards and my torso lean foward to keep me balanced. Can I fix that?
Steve Pan
Pedro -

This can be fixed. Keep working on strenghening the back and stretching the hamstrings, hips, glutes, and ankles. I would recommend limiting your squat to only go as low as you can while maintaining that good back arch. You may go deeper as your mobility improves and you are able to keep that back in a good arch into the bottom.

Danny
Hi! This is a great article. When I squat down, my torso stays pretty upright. But when I come out of the whole, my hips rise faster than my chest causing me to lean forward and not maintain my upright torso. What could be the problem? Should I think of leading with the chest?
Steve Pan
Danny -

Keep your chest up and the hips under you as you stand. You should be fighting to keep that posture upright and fight not to let the hips get behind you causing you to tip.
Josh
Nice article thanks, can you elaborate on this please, what would the adjustments be, a bigger heel ?

"For some athletes, femur length will exceed what can be compensated for through ankle flexibility in the basic squat position, and adjustments will need to be made to allow a better bottom position"
What you can do is adjust the width and angle of your feet in your stance until you find something more comfortable and something that works for you.