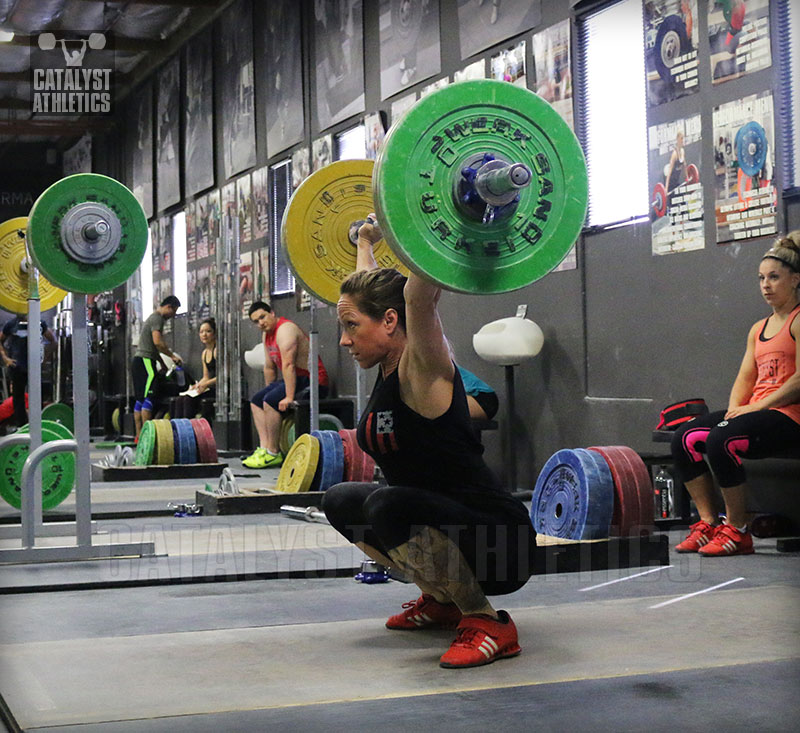 See more articles & videos like this in the Overhead Position collection.
It's pretty common to see a lifter's shoulders "sag" when they receive a snatch overhead—the elbows are tight and locked, but the bar shifts down and they appear unstable. Technically this is still a legal lift in competition (the shoulders can do anything as long as the elbows remain extended), but the problem with regard to competition is that not all judges are as astute as we are and may mistake shoulder movement for elbow movement. Of course, there’s always the possibility that you and your friends are doing the opposite—nothing personal, but I’ve seen it happen quite a few times.

In the gym, this movement simply increases the difficulty of the lift unnecessarily and even opens you up for injury. In any case, securing the overhead position as tightly as possible and reducing movement to the greatest degree is the best course of action.

There are a few possible causes of this problem:

1. You’re not strong enough to secure the scapulae into a solid foundation in the overhead position.

2. You’re not activating the scapulae adequately or mistiming this activation (or the corollary—you’re lazy overhead).

3. Your overhead position is improper and consequently the structure is weak and unstable.

4. Your lift technique prior to this point is poor, resulting in the bar crashing down and putting excessive demand on the overhead structure because of unusual downward force and/or horizontal momentum.

The shoulder’s extreme mobility is wonderful until you need it to stay still. In those times, the only solution is to tie the arm as directly and tightly to the trunk as possible. In the overhead position, the shoulder blades should be retracted forcefully and upwardly rotated—the simplest way to achieve this position is to squeeze the upper inside edges of the shoulder blades together. This is your foundation—this is what ties your arms tightly and securely into the trunk and creates a base of stability. Without this, the arms and shoulders will never be stable.

Practice this daily with every single overhead movement you do—hold everything overhead for a least a second before lowering (during, for example, pressing movements, etc.) and be aggressive in your lockout, focusing on using the base of your upper back to support the bar rather than just your arms and shoulders, whether it's an empty bar or a maximal lift—this aggressiveness and activeness needs to become habit. When you’re attempting a PR, the last thing you need to be worrying about are details of how you’re going to hold the bar overhead.

Strengthen this position with a variety of overhead lifts like snatch press, snatch push press, press in snatch, heaving snatch balance, snatch balance, overhead squat, etc. You can find a whole array in our exercise library. Hold all of your snatches in the bottom position for 3 seconds before standing, and another 2-3 seconds overhead after standing before dropping the bar. Grow to love holding the bar overhead and improve your confidence in your ability to do so.

Strength work focused more directly on scapular movement and position doesn’t hurt either. Upper back work like rows and all of those fancy band pre-hab exercises are a good addition to any overhead athlete’s training. Unless contraindicated in a specific exercise, focus especially on retraction of the scapulae, and typically also on depression.

The best overhead structure and all the strength in the world won’t mean anything if you don’t employ it at the correct time. This means preparing to receive the bar before its weight is already settling on you—if you’re already feeling the weight of the bar coming down, it’s way too late.

The final part of the third pull of the snatch is a vertical punch up against the bar. As the arms turn over and the bar and body move into their relative final positions, you need to squeeze your shoulder blades tight and drive straight up against the bar. It doesn’t want to be there. It wants to be on the floor while you fall down and cry. Lock it up and keep it where you want it. Get mean about it.

In addition to the timing of securing the overhead position, the mechanics of the lift leading into this final moment are enormously influential on the outcome of the lift. In the simplest terms, the closer the bar remains to the body during the turnover and the more space and time there is for you to move into the proper position under it (without losing connection to the bar), the better your overhead position can be.

If the bar moves away from the body, it will want to swing back into the overhead position, adding excessive horizontal momentum to it that you’ll then have to fight along with gravity. The bar should be so close during the turnover that you can smell it.

Maintaining a tight connection throughout the turnover is equally important—without it, you drop down out from under the bar and it comes crashing down onto you overhead. Would you rather hold the bar tightly overhead on your way down in an overhead squat, or sit down in the bottom and have me drop the bar into your hands?

Keep your grip on the bar throughout the turnover until your hands are flipping over into the final overhead position and you begin to punch up against the bar.

Remember that motor habits don’t change instantaneously just because you recognize they’re not perfect. Keeping working on it consistently and give it some time. Check out the articles below for more help with this problem and shoring up the snatch overhead position, and check out the new third edition of my book Olympic Weightlifting: A Complete Guide for Athletes & Coaches for extensive detail on the overhead position.


See more articles & videos like this in the Overhead Position collection.