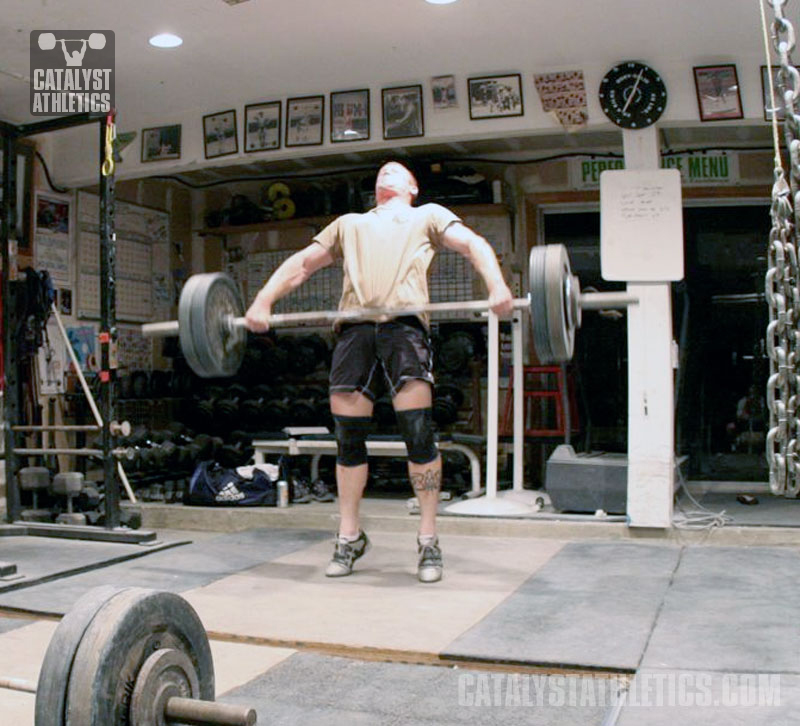 In August of last year my beautiful wife and I bought a brand new 3-story loft that had an attached 2-car garage with ceilings just barely high enough for me to lift in. I was so excited, as I had basically been raised in garage gyms since I started Olympic lifting at Coach Burgener’s years ago. I was finally going to be able to take all my weights out of my buddy’s garage and set up shop once again and lift in the sanctuary of my own place. So I went to work and got everything I needed, I stall-matted the entire thing, utilized every square inch of space I had, bought beautiful racks, stall bars, power blocks, and it was just dialed in—I couldn’t have been happier. It was a single-platform gym with everything you could need.

The neighbors would walk by and say Hi, ask what it was, and I always made it a point to be nice and as courteous as possible with the noise and be done with the O-lifts by no later than 5:30 in the evening. I loved my gym—it was my place and it was perfect. I would think 16-year-old Mike would be really happy with 42-year-old Mike.


16 Y/O Mike: Let me get this straight? You are still lifting weights 26 year later listening to the Misfits?

Then it happened… A letter from the HOA. For those of you who don’t know what that is, it’s a governing body that you pay into to make sure the rules of the neighborhood are followed and people don’t park RVs in their front yard for 6 months. They are apparently not Olympic lifting friendly; all it took was that one neighbor who didn’t think the daily Mike show of me lifting with my friends was what they wanted on their street. I tried fighting it, but the fines were about to start rolling, and I don’t need that kind of shit every time I lift, wondering which neighbor is going to rat me out again.

Now I am pissed. I have dumped some serious cash and time into my space, I am running out of options, and I have to lift. So I do it, something I never thought I would: I walked upstairs (by the way, if you lift frequently, think twice before you buy a three-story anything) jumped on the Mac, typed in “Crossfit Gyms”, and boom, the screen exploded. Apparently you can’t swing a dead cat in San Diego without hitting three. Closest one was 4.5 miles away, so I jumped in my car and drove down. I didn’t know a thing about the place and my entire plan was just to ask if I could lift in a corner and not bother anyone.

Erwin, a very nice guy, greeted me at the door, said they had a “barbell club” and walked me over to the side of the gym where it was. It was tucked away from the “Gen Pop” side and it was awesome. Three platforms, great bars and kilo bumpers—that’s right they had KILO F-ING bumpers. I was shocked. I like to think I am pretty jaded guy, but I will admit I was shocked. I shook his hand said it looked great and I would get back to him.

I went home and discussed it with the wife. She was on board because everyone knows a happy Mike, is, well, a happy Mike. So the next week I decided to drop in and lift at the place just to make sure it was fun and had the intensity I liked to lift in. I met the other Barbell coach, Mike, and he was cool: Ex-Military, so that’s always a plus, and really easy to talk to. Turns out in a couple weeks he and Erwin were going to be at the Catalyst Athletics Cert that I was going to be helping Greg at, so that was a good sign. Other lifters started rolling in and the place started humming along. I had a good training session and I liked the energy. It was pretty good group and people were working. It was a bit low key at first; I tend to be a bit upbeat when I train and like to yell encouraging words and get pretty fired up while having a good time. Mike was great in that he said if I saw anything wrong with the lifters, I could help him correct it if I wanted.

Fast-forward to a few weeks later: I couldn’t be happier. The owners of the gym have really welcomed me and the place is just awesome. The intensity in there is great, and there is a really hard working crew that shows up ready to get after it everyday. People pay attention to other people’s lifts, give encouragement, and they bust balls when it’s appropriate. We are off to the side, but you can see more and more people looking over and trickling our way every week. I took my buddy Murphy, who I have been lifting with for years. He’s a pretty cynical guy, and even he said that atmosphere was awesome. I even brought my T-bar rower in because you have to have one of those.

I can honestly say I’m glad my a-hole neighbor ratted me out to the HOA. I found a great place to train and a bunch of new people to train with (although I wish they had done it before I had to move and cut all of those freaking stall mats). I’m still doing arms and the Roadhouse complex at night with garage door shut while I listen to Lunatic Fringe, because you can’t shut me all the way down.

So please remember that just because one door shuts, it isn’t the end of the world. Just start kicking in other ones until you find some kilo bumpers, then walk in and say hi!

I want to thank James, Sarah, Jessica, Erwin, Mike and the rest of the Outlier Crossfit crew for welcoming me in and giving me a great place to train.

Will
I just got back from 2.5 years of training and coaching in Afghanistan to a new job in a new place and nowhere to call home. I'm living with friends while I figure out what I'm going to do with my life and I didn't want to set up the gym I brought back with me.

Cue Crossfit Forward. It was the closest place to me that had barbells that wasn't a globogym, so I just hopped in the car and went. I had the EXACT same experience with them that you describe. They have a little barbell club over to the side. The owners talked to me for a while and respected my experience. The folks are great, high energy, and surprisingly strong. They give and receive critiques and motivation well. I'm still rough as hell around the edges from being away for so long, but they handle my bullshit well.

Robert59
Wow! Your HOA prohibits garage gyms. I'd move before I shut down my garage gym. I do have better lifts in a more public setting but there's something nice about the solitude of me, my garage, and my weights.
Jeremy
Alright, I give up. What the hell is a roadhouse complex?
Steve Pan
Roadhouse Complex is DB Bicep Curl + DB Shoulder Press.
Roland
My first HOA gave zero shits about my mockup ninja warrior course, then they sold to a new management company and I had to tear it down. All my neighbors loved it. Good to know I can't lift with the garage door open. Nothing like a Houston summer day in a a garage
Geoff
Yes, I hate HOAs. The last subdivision I lived in, they'd come around with a ruler (yes!) to measure the height of your grass so they could specify the rules if the grass exceeded a certain length. I will admit that they never stopped me lifting in my garage. We've moved to the sticks now and the only odd rule in our 'covenant' is that 'the discharge of firearms is only allowed for the killing of vermin'. No one has been able to give me an exact definition of vermin! :-)