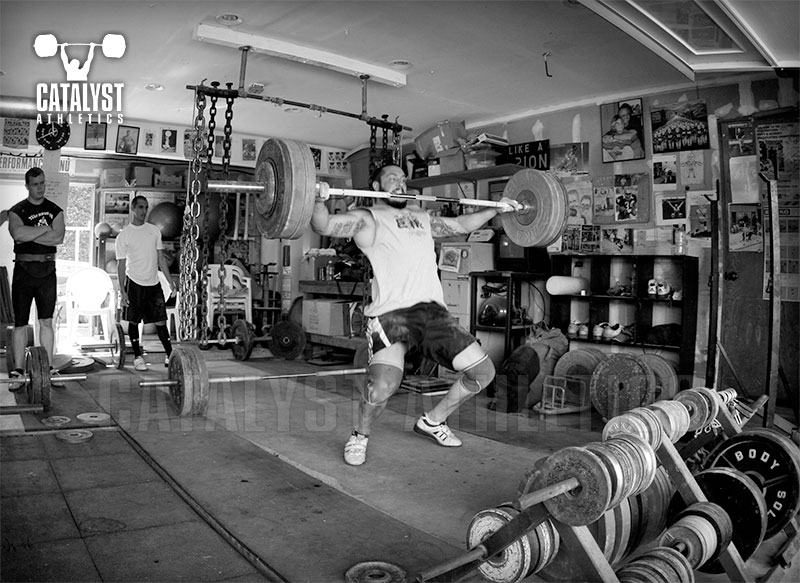 Lineage in coaching is a very meaningful idea to me. It’s something I believe is overlooked to a stunning extent in weightlifting—less in the competitive weightlifting community than in the larger community of weightlifting including everyone involved in one form or another, often primarily or exclusively on the internet. And most troubling, it seems evident that giving credit and paying respect to lineage is often not overlooked, but actually intentionally avoided. Presumably the individuals posing as spontaneously materializing coaches are doing so because they believe it bolsters their image—geniuses who needed no teaching or help to get to where they are. Unfortunately, it seems this image is too frequently believed, but I’d like to think that most people understand how unrealistic this is and that all good coaches have roots they celebrate and to which they pay their respects.

I started off self-taught, but I knew enough to know I didn’t know enough. Mike Burgener became my coach and my mentor, and my time training under him really became an apprenticeship as much as anything else. This is truly the time I became a weightlifter, and it was the foundation of my evolution into the weightlifting coach I am now—one who has some accomplishments but also a long way to go and a lot to learn. I’m proud of where I came from and I’m forthcoming about it.

I believe that apprenticeship is the best way to start as a coach—it’s the way that master craftsmen have always passed on their knowledge to the next generation. You can learn from books, DVDs, magazines and articles, but this kind of learning is incomplete and lacking an intangible quality that I can’t exactly name, but I know is the key. I also believe that you have to be a weightlifter—genuinely BE a weightlifter. Not practice the lifts, not enjoy the lifts, not do the lifts as part of another sport or activity, but live the life—live the life that is constructed around the demands of being a competitive weightlifter, train under a coach, in a true weightlifting gym, and ideally in a team environment. If you haven’t had this experience, I don’t think you can even appreciate how important it is—but it’s glaringly obvious when coaches have not. This doesn’t mean you have to have been a world-class weightlifter; I certainly wasn’t.

Understand I’m not saying that without such experience as a lifter and apprenticeship as a new coach you can’t possibly teach people how to lift, help people enter the sport, or any number of other things. But I am saying that without that, you will probably never become a great weightlifting coach.

Circling belatedly back around to my original point, one of the characteristics of great coaches is the understanding that giving credit to their mentors is not the same thing as surrendering the credit due for their own original ideas or work. There is not only a willingness to give this credit, but an eagerness. There is pride in the pedigree. Trying to hide one’s lineage (or lack thereof) and pretending to be someone you’re not is the behavior of amateurs and frauds.

If you haven’t had this experience, I don’t think you can even appreciate how important it is—but it’s glaringly obvious when coaches have not.

It’s easy to be a technician—to learn protocols and algorithms and repeat what has been said or written, particularly these days when so much information is so readily available. Technicians can help a lot of people become better lifters, and introduce a lot of people to the sport. But being a technician is very different from being a coach, which is, in my mind, a teacher in all the best senses of the word, and one who understands the whys and hows in a way that allows them to truly coach—not just run people through the motions.

(I see my work plagiarized frequently—and blatantly. Shockingly obvious in many cases. I realize that the internet has for some reason made people believe that information and products can simply be claimed as their own at one’s whim with no thought toward credit or compensation, but I’m old-fashioned and naive and believe that people should naturally feel compelled to not be shitty. I just try to keep my mouth shut and be flattered instead of furious like my plucky wife, who I have to restrain from full-scale internet warfare every time someone violates this seemingly simple expectation of decency and respect. Sometimes this is extremely difficult to do, particularly with repeat offenders. Of course, pointing it out doesn’t do any good—I have no doubt they’re fully aware of what they’re doing.)

Lineage doesn’t mean you can’t be original. It’s a foundation. I don’t teach or coach or program exactly like Mike Burgener. There are things I still do the way I learned from him, and there are things that I have changed over the years as I experimented and discovered what worked best for my lifters. I have learned from a lot of other coaches as well—Bob Morris, John Thrush, Bob Takano for example—and I have developed my own original ideas and practices. But nothing will change the fact that my roots as a weightlifter and weightlifting coach remain in a little 4-platform garage in Bonsall, California.

12 Comments
coach b
i am very humbled!!
Mike Maning
Well Said Greg. Hi Coach B!
Jess Salvaggio
I love this.
Matt Foreman
Yep.
Ashley Weber
That's right, that's where all the magic happened! Thank you Greg, Aimee and Coach for teaching me how to be a weightlifter. Just by observing your actions and coaching I am now who I am and am passing that down.
Tyler
"but I’m old-fashioned and naive and believe that people should naturally feel compelled to not be shitty. I just try to keep my mouth shut and be flattered instead of furious like my plucky wife, who I have to restrain from full-scale internet warfare every time someone violates this seemingly simple expectation of decency and respect"

Might be one of the funniest/saddest things I've read in a while.

Ashley Koren
I agree with everything, such a good article!! I love my coach.
Duke
Greg,

I have no doubt that your willingness to acknowledge your lineage and pay homage to your mentor contribute to your success. I have found that everytime I stop to think about what I have learned from my mentors (or better yet pass along the wisdom I have learned to those I seek to mentor) I learn something new. The simple truth is that no one succeeds in life without a great mentor/teacher/coach, and those who recognize that fact have a huge advantage over those who do not.

As for those who seek to profit from your work and the work of others without attribution, they inevitably are revealed to be the fraudsters that they are.

JP
Love it bro!
Chad
great article, its funny cuz I have spent most my life in the traditional martial arts, and mma, and the parallels between the two s really astounding. self mastery, relentlessness, breathing,explosiveness, and of course the pride in the style and lineage.
Chad
the comparisons being weightlifting and martial arts
Ken
This connects a lot of dots for me. I retired from competition in 1977 and only in the last two years have I regained my interest in coaching and competing. But a lot of the things I see going on today, in some of these new gyms, don't fit with what I remember. This is the answer, no roots, no foundations. Takes me back to the garage with about a dozen other guys. Maybe I'm not nuts after all.