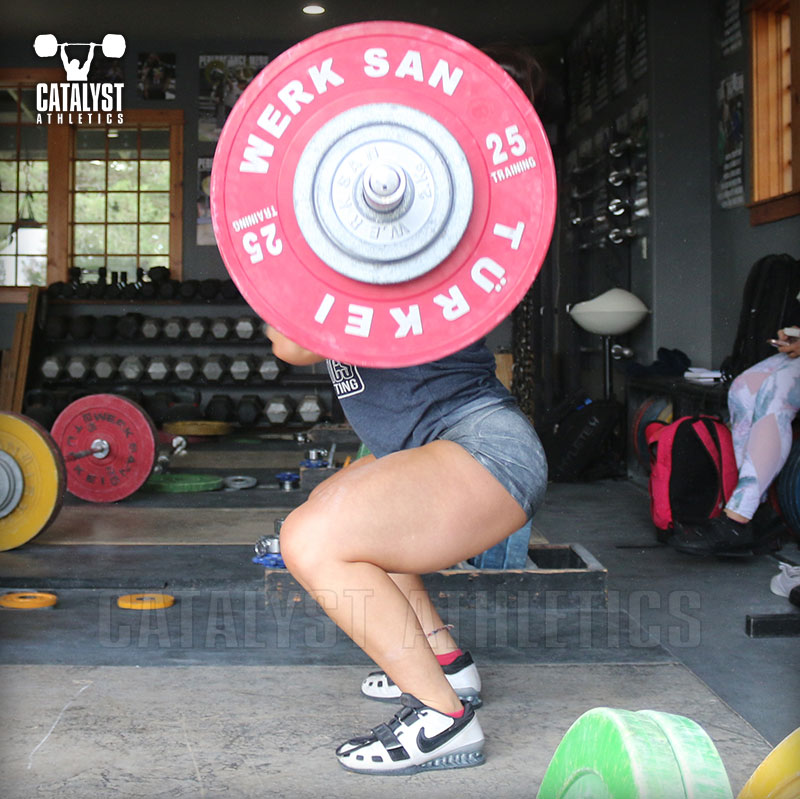 Almost all of my articles are about competitive Olympic weightlifting. Training, competition, mental development, etc. At this point, I think I’ve written around 300 articles about the sport.

However, I recently realized I’ve never written an article about athletes from other sports using the Olympic lifts in their training. This is an extremely well-covered topic in the strength world, obviously. Greg Everett wrote a book about it. Organizations like the NSCA are entirely devoted to it. There are thousands of strength coaches around the world who make a career out of training athletes in the weight room to be successful in their sports, and most of those weight rooms have platforms and bumper plates in them.  It’s one of the primary components of the athletic universe… and apparently it’s never occurred to me to write about it.

So I’m going to give you some thoughts about one of the fundamental questions that pops up frequently in this area. Are the Olympic lifts beneficial for ALL athletes, regardless of the sport?

I’ve heard a lot of discussion about this over the years. Some coaches believe the answer is YES. Incorporating the Olympic lifts into an athlete’s training program will be universally helpful. The athleticism, multi-joint movement, and explosive strength components of the OLifts make them unanimously valuable for all sports. I’ve known strength coaches who think everybody from swimmers to golfers to distance runners to football players should be doing some form or variation of snatch and clean and jerk.

I’ve also known plenty of coaches who disagree with that.

Personally, I don’t think there’s a clear YES or NO answer to this question. I think it’s far too complex for a simple answer. As with many things in life, I think there are several different arguments you can examine without ever reaching a carved-in-stone bottom line. Here are some of the arguments that lean more in the YES direction:

More weapons = better chance of winning a battle: This is the belief that incorporating the Olympic lifts into athletes’ training might help them, and it might not. But the possibility that it might help them is pretty high, so that justifies their use. It’s like an army that marches onto a battlefield with rifles, cannons, and bombs. They might not need all that firepower, but you never know. And if there’s any chance that it might be needed for victory, bring it with you.

Increased strength, power, and athleticism are universally beneficial: Here, we’ve got the idea that you’ll simply be more successful in sports if you’re stronger, more powerful, and more athletic…and the Olympic lifts are excellent ways of developing those qualities. It doesn’t matter what sport you do. Any human activity will be enhanced by the physical attributes used during the OLifts.  If you’re a pole vaulter, you’ll be a better pole vaulter if you’re stronger and snappier, etc.

And here are some of the arguments that lean more in the NO direction:

Some sports have almost no connection to the attributes of the Olympic lifts: This would be the marathon runner example. Marathon runners don’t need to be explosive. They don’t need to be agile or athletic in a wide range of ways, and they certainly don’t need added muscle mass. So there’s no reason for them to do the Olympic lifts. You can make a pretty solid argument that they offer no benefit whatsoever, and there are other sports in the same boat.

Training time has to be prioritized, and things that have questionable benefit need to be eliminated: This one is self-explanatory. Let’s say we’re talking about a triathlete. Between swimming, biking, and running, triathletes will frequently train 2-3 hours per day, six or seven days a week (much more in some cases). When they’re not training, they’re completely exhausted and struggling to recover for their next session. Is it wise to throw some weightlifting workouts into their schedule, especially knowing there are plenty of accomplished experts in triathlon who don’t think weight training is even valuable for their sport?

Listen, I’m obviously a weightlifting guy. My career as a competitor and coach in the sport goes back over thirty years. I’ve also been a strength and conditioning coach at the high school, collegiate, and private sector levels. I’ve got a ton of experience in pure competitive Olympic weightlifting, and I’ve also got a ton of experience in training athletes for various sports. And even I don’t think there’s a black-and-white answer to this question.

Do I think the Olympic lifts offer performance benefits for many athletes? Yes, I do.

Do I think there are certain athletes who don’t need to do the Olympic lifts in their training? Yes, I do.

And we haven’t even talked about injury. If the Olympic lifts are taught incorrectly (and sometimes even when they’re taught correctly), there’s always some potential for injury.  How would you like to be the strength coach who breaks LeBron James’ wrist because you made him do power cleans?  There goes his jump shot. There goes his NBA championship. There goes your career.

Training athletes is all about looking at the competitive requirements of their sport and then determining the best way to improve their performance. You have to do this without your judgment being clouded by your love and devotion to any particular training method. If you’re a lifetime runner and you think it’s the greatest thing ever, you can’t let yourself think every athlete needs to add running into their program. I think that happens a lot when it comes to strength coaches.

There’s a good reason why all those sports performance weight rooms have platforms and bumpers in them. The OLifts are terrific training additions for a wide range of athletes. I would never say otherwise, so don’t misinterpret my belief on this. But yes, I also think there are some sports where there’s basically no need to do them.

Just some food for thought.