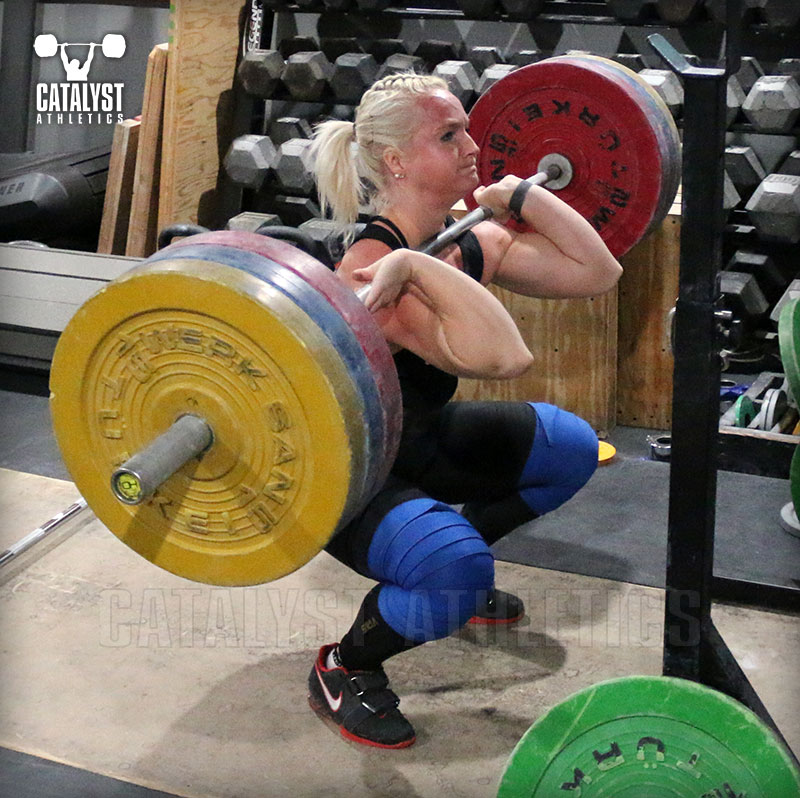 Okay, let’s get right to the point on this one.

The 2018 IWF World Championship in Turkmenistan just wrapped up last week, and it was an amazing show. Records fell, medals were captured, fans were thrilled, and the weightlifting world was electrified. Great! Stupendous! Sensational!

So…let’s take a look at a couple of maybe-not-so-sensational hiccups that were noticed by a LOT of people at the Worlds. I’m talking about fuzzy rule enforcement by the referees and the increasingly noticeable presence of the jury.

The first thing you need to understand is that there are certain IWF competition rules that have been collectively ignored by referees for years. One of them is rule 2.5.1.2, which states that “Touching the platform with any part of the body other than the feet” is a rule violation. This means if you’re one of those lifters with contortionist-level flexibility who can bottom out and touch your butt on the platform when you catch a snatch overhead, you’re supposed to get red-lighted for that…but you never will. I’ve probably seen thirty or forty butt-touch snatches throughout my career, even at the Olympic Games, and I’ve never seen one get a red light.

Another one is rule 2.4.3. This is the rule about dropping the bar after you get the down signal, and it reads “The grip on the barbell must only be released when it has passed the level of the shoulders.” If you’ve competed before, you know this rule. But at the international level (especially in the light women’s weight classes where all the lifters are around five feet tall), forget about it. I’ve seen many lifters finish a clean and jerk, get the down signal, and release the bar by simply flipping their wrists forward while keeping their arms extended overhead in a victory celebration. The bar is in free fall from the overhead position, completely in violation of the rule…and no reds.

However, there’s a new one that seems to be on the rise. I’m talking about oscillating the bar on the shoulders prior to the jerk. For the sake of brevity, I’m not going to explain the physics of this one in detail. Suffice to say when you’ve got heavy weights on the bar, it’s a massive advantage to use the oscillation and “whip” of the barbell before you dip and drive the jerk. Using the whip of the barbell DURING the dip/drive phase isn’t illegal. It’s a smart technique that most great lifters use. But getting that bar to start oscillating and whipping BEFORE you start the dip/drive is illegal. The exact wording of the rulebook states that it’s a rule violation (2.5.4.2) as follows: “Any deliberate oscillation of the barbell to gain advantage. The athlete must become motionless before starting the Jerk.” In other words, it’s not illegal if the barbell is oscillating on its own, as long as the athlete is motionless and not “deliberately” doing it to gain advantage.

Obviously, the rule itself leans in a blurry direction because we’re relying on referees to determine the difference between deliberate oscillation (illegal) and inadvertent barbell whip happening on its own (legal).

To state it plainly, you’re seeing a lot more oscillation on the platform these days, and almost all of it is getting white lights. The referees are obviously judging this bar movement to be non-deliberate.

Let me share something three-time Olympian Cheryl Haworth wrote on my Facebook page when I posted about this recently. Her words were, “Any oscillation on the women’s bar prior to the jerk, in my opinion, is deliberate. I jerked 170kgs on a ladies bar and I can easily make it stop moving.” This is coming from an all-time great, and several others have echoed her sentiments. I agree as well.

There have also been some high-profile lifts that were blatantly obvious examples of deliberate bar oscillation (which is informally called “double bounce”) that got white lights and passed. The most noteworthy example from the 2018 Worlds was Tian Tao’s 226 C&J. Check out the video of this if you haven’t seen it. The slow-motion version makes it incredibly clear, although many people thought it was visible enough in real time. White lights…good lift.

And yet another rule that’s getting frequently ignored is 2.6.3: “Failing to fully extend the knees at the completion of the lift.”  You see this one all the time. Lifters finish their jerks with their knees still bent, and they get the down signal with three whites.

I’m not writing all of this to whine about bad calls like some fat dude who sits on his couch and yells at his TV during NFL games. I’m writing it out of genuine curiosity. What’s the deal with all this stuff? The referees know the rules. They’ve passed their exams. And we all know occasional referee error is just a basic part of sport. Understood. I’ve been refereeing meets for decades, and I’ve missed a few calls here and there. It’s part of the game. Fair enough.

And then you’ve got the increasing presence of the jury. I’m telling you…ten years ago, you rarely saw a jury pause, or the jury overturning of referees’ calls. It happened, but not very often. Now, it’s happening more and more. Is this a response to all the spotty officiating I just wrote about? Is the jury a necessary force because referees are failing to do their jobs?

Or is there something else going on?

As I said, these are legitimate questions. I’m not suggesting some whackjob conspiracy theory. I’ve been in weightlifting for a lifetime, I’m seeing some changes in the officiating side of the sport, and I’m wondering out loud where it’s all going.  Nothing more. Obviously, the best-case scenario (in my opinion) is strict, consistent officiating that covers all areas of the rulebook equally.

If certain rules need to be taken out, then let’s take them out. If we’re not going to EVER red-light a butt touch in the snatch, then let’s just take that rule out of the book. It’s better to retool the rulebook than to ignore certain parts of it. You know that rule we mentioned about how lifters can’t release the barbell until it passes the level of the shoulders? That rule has been changed in recent years. It used to say you couldn’t release it until it passed your waist. They changed it to the shoulders, partially because so many people were dropping the bar illegally and NEVER getting red-lighted for it at the international level.

If a rule needs to get changed, change it. If you’re not going to change it, enforce it. Don’t just blow it off.

At least that’s my thought on the matter. What’s yours?

DP
Perhaps changing the "press out" rules as well?
MH
some examples...
https://www.kari-bra.de/?page_id=504
Ed.Fergusson
I agree with Matt; I sometimes get frowned at when giving red lights, but, a rule is a rule - uphold it. Russ. Prior, holder of 32 Commonwealth records for Canada, often just let go of the bar at arms length when the rule was, "Hands on the bar past your waist"; when I gave him red lights, he glared at me, but often got the lift because he was so important. Please folks, know your rules and give the proper judgements.
sam
What is the rationale behind the "let go of the bar at shoulder height instead of overhead" rule? Its not like it displays any additional skill or strength to hold on to it while it falls.
Daniel
I agree with the sentiment expressed in the article. I can give slack to the refs about the platform butt touch, simply because most of the time they can either look for press outs in the snatch and elbow-knee touches in the clean, or the butt touching the platform.

The oscillation rule should either be defined more clearly, or eliminated.

The only time I recall an athlete being called for dropping the bar was at the 2016 Europeans in the M62. It was actually the second time in a row that the lifter did that and it was a jury overturn, the refs passed it in both instances.

The problem is that the sport has always been plagued by inconsistent refereeing and rule interpretations that ran a slippery slope. Back in the days, no body contact was allowed on the way up, yet referees basically ignored any touch below the knees. The press, obviously, was another glaring example. First the body had to be kept straight. Since it's very hard to do, lifts started to pass. Then it was changed so that bending back wasn't "excessive". Of course, that is not an objective parameter, so eventually lifters weren't called even if they looked like curled fries. Knees should have remained straight, but since it's impossible while bending like that, referees concocted the idea that as long as a lifter didn't push with the legs, it was fine. Then, obviously, because that caused other gray-area cases, athletes simply started push pressing, and that passed as well.

@Sam: the rationale is that it displays control over the bar, same with the idea of replacing the bar on the platform. The underlying logic of the rules is that the lifter has to show control over the weight. So, control is shown both in lifting and lowering the barbell. Imagine if a lifter loses the bar overhead, maybe because they suddenly get dizzy or tweak an elbow. I can see why situations like those might be desirable to be excluded from the acceptable parameters. Keeping the hands until shoulder level is a sign that the bar wasn't simply lost (provided the down signal was given) and it's not aggravating for the lifter.

Jordan
Instead of crying about other people, just lift more weight than them. If everyone is allowed to break the rules then it's fair.
Dresdin
The Jury is more involved now possibly due to the presence of more referees with less international experience. This happens now that all competing nations have a right to nominate technical officials to the competition in order to ensure full participation. This will result in some less experienced referees working the lights. There will inevitably be more errors that should be corrected. In the old days most referees were from the Iron Curtain nations. These had much experience but political bias was more of a problem. There was no room for appeal after I'm not sure what date (1960 or so). After that the jury could grant another attempt but not a reversal. Unless we want a return to having only a select crew to referee we will probably have to live with jury reversals of inexperienced referee decisions.
Barry
Dare we include the breaking of world records after the lift timer has expired in these rule violations that aren’t enforced?