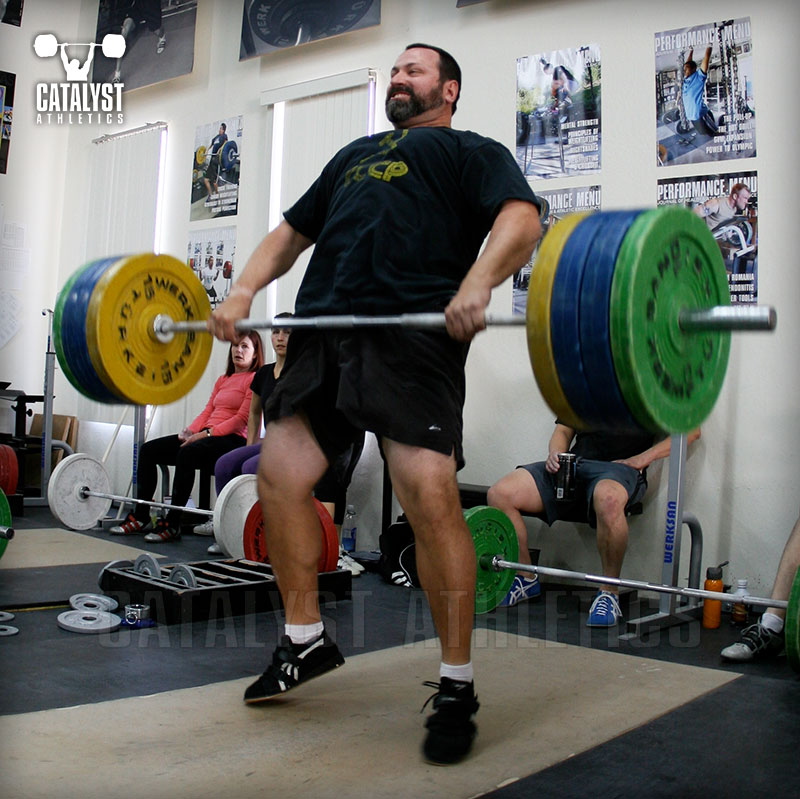 I’m writing this article on June 24th, 2018. In two months, the World Masters Weightlifting Championship will take place in Barcelona, Spain. Want to hear something crazy? The organizers of this meet had to cut off the entry deadline a week early because the number of lifters grew too high. They reached 750 entries, so they had to cap it because they couldn’t handle any more than that.

750 lifters at the Masters Worlds. That… is… incredible. Make no mistake about it, masters weightlifting is growing at a phenomenal pace.

The meet will be drug tested, just like all national and international masters meets. You knew that, right? The major IWF international masters competitions (World Championship and Pan Ams) have been drug tested for a long time. But here in the US, the two major national meets (Masters Nationals and American Masters) have just started drug testing within the last few years. I think last year (2017) was the first year they tested American Masters, and they started testing National Masters three or four years ago, I think (2014-15, something like that). Some of you probably know the exact years.

We’re talking about athletes in their 30s, 40s, 50s, and beyond. Old people, in other words. Why are these lifters being drug tested?

Because a lot of them are taking drugs, and the masters federation wants to catch them and keep the playing field level. As we said, it’s a new development. Prior to the last few years, you could show up to the national masters competitions juiced to the gills, and it didn’t matter. You weren’t even going to get tested. The only meets you had to clean out for were the Worlds and Pan Ams, and there wasn’t even a strong chance that you’d get tested at these meets. You always had the option to stay loaded and just roll the dice.

That’s still an option, based on what I’m hearing. I haven’t competed in a national masters meet since 2012, but I’ve heard a lot of conflicting reports about the testing that’s going on. I know a handful of lifters who have won Masters Nationals, Pam Ams, and/or Worlds and never gotten tested. I know testing is happening, but the word around the campfire is that it’s sparse.

Are masters lifters really pounding the drugs? Do we have a bunch of geriatrics loitering around the locker rooms at LA Fitness, asking the bodybuilders for some D-Bol? Probably not so much. Masters lifters don’t need to do this. They can always just do hormone replacement therapy.

HRT clinics are all over the place. You set up an appointment and they measure your testosterone to see if it’s low. If it is, they’ll start giving you weekly testosterone injections to “bring you back up to normal.” (Actually, they’ll do this for you even if it’s not low. I know a guy who had a natural measured testosterone level of 800, and he’s getting HRT from a clinic. These are businesses. If you’ve got the money, they’ll give you testosterone).

HRT clinics won’t put you on a high-octane juice freak cycle of drugs. They’re not shooting little old Grandpa full of horse steroids and growth hormone. But they’ll give you testosterone, and even a small amount of it can make a massive difference in performance.

This isn’t just going on with men, by the way. Women are doing it too.

Most of you already know about this. This article shouldn’t be too controversial because I’m not describing anything that’s not common knowledge.

So… that leads us to a question: Should masters weightlifters even get tested? Or should they be allowed to just take whatever they want?

I’ve heard discussion about this over the years. The anti-testing argument basically says something like this: “Look, these are a bunch of older athletes doing this for fun. There are no Olympic Team spots or paychecks on the line. Plus, it’s really hard to do this sport when you’re older, especially when you’re in your 50s and 60s or higher. If people want to get some help from PEDs, let them do it.”

The pro-testing side says: “The playing field still needs to be level, no matter what the age is. Even though masters lifters are just competing for the love of the sport, they’re still serious and committed to what they’re doing. They care about their results, and it’s unfair for a clean lifter to get beaten by a juiced lifter. It doesn’t matter if this happens at age 25, 45, 65, or 85.  Fair is fair, and drug cheats need to get caught.”

What do you think? What’s your opinion?

The title of this article is a question, and that’s how I’m going to leave this article. It’s a matter of opinion, and I wanted to put it out there because this is a debate I’ve been hearing for decades, as long as I’ve been in weightlifting and the masters division has existed.

My personal opinion is pro-testing. I’ve set masters records as a clean athlete and then had them broken by lifters who were juiced. And yes, it pissed me off. Call me corny if you want, but I’ll always support the idea of sport being as fair as possible.

However, I also acknowledge and understand the other side of this argument. If masters drug testing was abolished and everybody was allowed to take PEDs if they wanted to, that would be fair. Wouldn’t it?

Again, make sure you notice that a lot of the things I’m writing have question marks on the end of them. I’m not pounding my shoe on the table, demanding that everybody agrees with me. I have my personal opinion, but I understand the world is a complex place. Other people might disagree with me, and that doesn’t make them stupid. They’ve got just as much right to their perspective as I do.

What do you think? Would masters lifting be more fair if we just let everybody take whatever they want? Or do we still need to test to keep the sport clean?

JM
I think the very reason that it's more for 'fun' (not to denigrate masters lifters, it's still serious competition), as there's no progression into Olympic level, should mean that testing should be in place.

A proper steroid cycle is expensive, some people could afford it and some people couldn't. If you remove testing and give complicit permission for PED use you create a pay-to-win scenario where those with the money and the desire can jump on the gear and gain a clear advantage.

I'm not against steroid use if it really is just a personal decision, but it's not fair to lump clean and roided lifters in the same competition.

Frank B
I'm pro-testing. There may be negative health implications relative to taking supplementary testosterone. It's not right that an athlete should have to make a choice to compromise their health.
Shawn
I honestly don’t have a problem with PEDs, at any level. If you’re willing to take the risk, go for it. Does it create an uneven playing field, sure. But so does having the money to afford a coach, the perfect diet, and the time to train. We’re not curing cancer here, we’re weightlifters.. have fun and lift some heavy shit.
Lacey G
As a masters lifters that has competed at the national level, I am definitely for testing. Just because you can afford/get your insurance to pay for HRT, doesn’t make it ok. Not everyone has access to those benefits. Having a coach or perfect diet or endless time for training and recovery does not alter my basic physiology to give me a more competitive edge over someone who uses PEDS. I agree with JM that it creates a very uneven playing field with a pay-to-win situation. It is frustrating enough to to train your ass off, compete and get beat by people you’ve never heard off, but to have somebody come in from nowhere and podium because the were doping, that’s completely unfair.

Furthermore, I don’t think it is reasonable to have two sets of standards that give masters a special pass. This seems like it could create issues with senior athletes who aren’t currently competite at the national level to just dope it up, train heavy and hope they stay healthy til they make it to masters where doping is ok.

Let’s keep testing!
Daniel
I am a Masters Lifter, and have competed in several National and International Level meets, although none since 2016. I have competed against several lifters that I know were using. I made a decision early in my competitive career that I would be drug free. I personally don't care if someone is using, as its not a moral decision as much as it's a personality trait. Also, steroids never made anyone a champion. The same people who are champions now would still be had steroids never been invented. The traits that make someone a champion have nothing to do with drugs.

Last July, after months of losing weight, strength and increasingly lower energy levels, I was diagnosed with Low T. I started TRT and have since regained all the weigh, energy and strength I lost. I went thorough the proper channels and applied for a TUE, as my low T was due to an organic dysfunction. I was denied the TUE, thus ending my competitive career. TRT made a dramatic improvement in my quality of life, and I'm not willing to give that up for a couple of meets a year.

I'm pro-testing, but also believe there should be a TRT policy in place, because I'm sure there are a few more people like me.
simon woods
The competitions should be drug free. Steroids have wrecked nearly every sport I can think of (and made them boring), For example: it's interesting to think how strong a woman can become naturally. I have no interest in how strong a woman (plus male hormones) can become. The drugs are used, in my opinion, mainly so that the lifters can survive the overtraining that they are made to do by coaches (Bulgarian method, for example).
Milnerb1
I’m a 49 year old who has developed a love for oly lifting over the last year after 5 years of Crossfit focus.

I am about ready to start competing in lifting.

I have also been on hormone replacement therapy for the last 10 years to deal with low testosterone (~300), I keep my levels in the normal range (800-1,000) and do not abuse testosterone.

Should I not be able to compete?

My sense is that, if folks like myself are tested, can show a legitimate prescription and can test within the normal ranges, we should be able to compete.
Any exogenous hormone/anabolic of any kind is banned, whether or not it's prescribed. You could try to get a therapeutic use exception from USADA, but my understanding is that they won't grant one for that, regardless of the actual levels or arguable medical legitimacy.

Greg Everett
Diego
I am a masters liftter and it's very frustrating, I ranked better in the european meets than in my own country because there is no actual testing. Nobody should have to compromise health because of cheaters. Keep testing and if you can't lift without drugs than don't compete you weak!!!
Jeff Towns
Absolutely should be tested.
I gave up weight lifting at my peak when I realised everyone who was beating me was on steroids. At 62 I started competing in masters believing it was clean. Your article has shocked me.