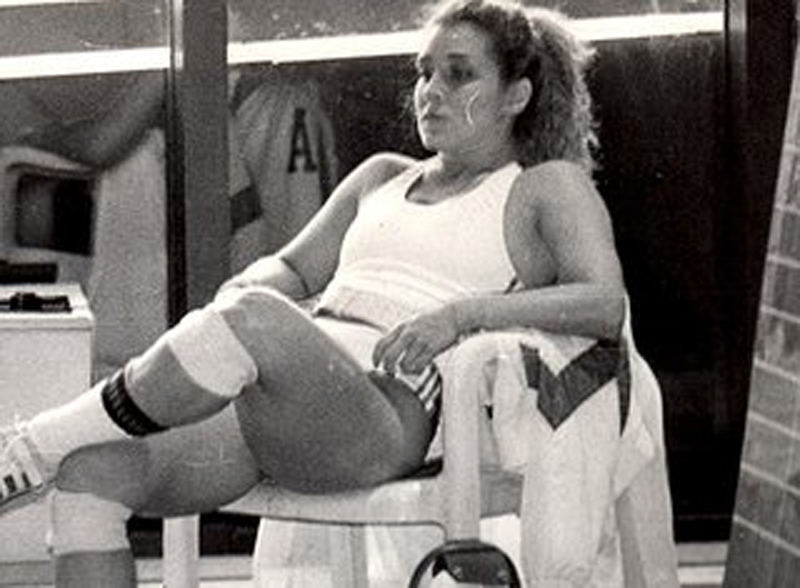 When I set up this interview, it occurred to me that I’ve known Ursula Garza Papandrea throughout my entire weightlifting career. She’s one of the few people I interview who has been in the sport longer than I have. I don’t remember where we met for the first time, but I know we’ve been friends for many years, and it’s a special treat to deliver her story to you.

Ursula came from the first generation of female weightlifters, when things were much different than they are now. She started in 1987. You have to remember that women’s weightlifting wasn’t admitted into the Olympics until the 2000 Games in Sydney. That means all the women who were battling it out in this sport in the 80s and 90s were cut off from the Olympic dream. They competed in National and World Championships, but that big Olympic glory just wasn’t part of the picture for them.

I don’t mind telling you that the respect for women’s weightlifting was different back in those days as well. The gals who come into the sport now don’t have to fight the same battles as Ursula and her peers from 25 years ago did. Nobody is saying that sexism is dead in our society, but it’s nothing like it used to be. In other words, Ursula was one of those lifters who had to fight through a long stretch of obstacles and frustration as she was making her name in this sport.

Fortunately, she’s a tenacious little bugger. Nothing has ever stopped her as she rose through the ranks as both an athlete and a coach. I’m proud to call her a friend, and we’re excited to hear about her life in weightlifting.

Tell us about your background. Where are you from, where do you currently live, what’s your occupation, family life, etc.

I grew up in Houston, Texas where I went to Willowridge High School and was the captain of our varsity cheerleading squad. I graduated from Texas State University with a Bachelor’s Degree, majoring in Exercise and Sports Science with a minor in Russian and followed with a Master’s in Political Science. I now live in a suburb of Austin, Texas with my 9-year-old son, who plays soccer and lifts, and my husband, who is a former soccer player. We have been married for nine years. I teach government classes at Austin Community College as an adjunct professor in the mornings and coach weightlifting at my gym inside RedSide CrossFit in the evenings. I also teach USAW Certification courses, CrossFit Weightlifting courses, and my own seminars on weekends.

I started weight training when I was 14 with my older brother at a nearby YMCA. When I went to the University of Texas in 1987, I was introduced by Mike Mastrangelo to Olympic style weightlifting. I was originally coached by him. He left to join the CIA, but had met Mike Huszka Sr. Mike trained me for my first nationals in 1988, but then he moved to Nebraska. At nationals, I had VERY fortunately met John Coffee, who has since been the most enduring influence on my training and coaching. Angel Spassov moved to Austin in 1989 and I started training with him until 1992. In late 1993, I met my ex-husband Oleg Kechko and trained with him until we divorced in 1999. I retired from serious lifting in 2000 due to a back injury suffered in 1999, although I came back for a few national events and have since then competed at masters nationals a few times.

In addition to these results, Ursula has added these masters division accomplishments:

You’ve made the transition from athlete to coach in the sport. Describe that process to us. What are the biggest similarities and differences between being an athlete and coaching?

Being an athlete is a very selfish endeavor as opposed to coaching, which should be/is selfless. I started coaching while I was an athlete in 1992 to assist Stacey Ketchum who simply needed help, so I helped her. We trained as a pair for the rest of our careers and later added Sandy Abney and Jodi Wilhite (now Vaughn) to our little training group. I was coaching and developing other national level athletes from 1992 onward. I didn’t intend to coach, I just fell into it as the most experienced of the athletes. Of course, I studied Kinesiology and Exercise Science and was quite interested in the self-education that many of us athletes and coaches put ourselves through, reading everything we can get our hands on. I trained and coached along with my ex-husband when he came in 1994. I continued to coach after I retired, although I tried to stop in 2000 but Jodi didn’t allow me to quit, haha. As a coach, I just put my head down and worked, trying to become the best I could be and learn as much as I could from the coaches who were successful during those years. I spent every evening and weekends coaching since 1992, and at every nationals in the warm up room learning and honing competition coaching skills. I experimented with programming over the years as well, trying to incorporate the principle of strength and conditioning with the practical experience and knowledge I learned as an athlete. In 2003, I earned the rank of USAW Senior International Coach, the highest level in USAW. It has been over 20 years since I started trying to coach and I feel like I am still learning about coaching every day and that I still have a long way to go. I currently coach a team called Texas Barbell Club comprised with male weightlifters, some of which I have coached for years, some newer guys, and some that I help in competition. In our first year, we placed 3rd at the American Open as a men’s team. We will compete as a team at the 2014 Nationals. Most of the women I coach still lift for Coffee’s Gym, as I have since 1989.

(Author note: This interview was completed before the 2014 National Championship, where Texas Barbell Club won the team title. Congrats, Ursula!)

Describe some of the obstacles you face, or maybe some things that frustrate you in weightlifting. What kinds of changes would you like to see, either personally or with the sport in general?

Well this seems obvious, haha. As a woman (here we go), I am one of many women who have faced a pre-existing chauvinism in the sport. Not impenetrable, but certainly real. I think in the recent decade it has changed considerably and many more women are being recognized and given opportunities in the sport as coaches. I certainly had moments of frustration, but I recognize that we are much more advanced in this area as a society. So although it has been a thorn for me, it is not as bad as it could be. In any case, I have managed to succeed so I don’t think it is anything that can hold you back. I inadvertently became the highest ranked female coach in the country, through focus and work, not in an intention to break some sort of glass ceiling. I am always happy to see more and more women in the backroom coaching and think we have gotten past the stigma, particularly that women can’t coach men.

However, I think I am most frustrated with the doping issue. I am not convinced that most people want to see clean athletes compete. The double standard that we apply, revering doped up foreign athletes and then criticizing American athletes who are expected to adhere to another standard, chaps my ass. Either clean it all up or make it all dirty, but this half and half shit is for the birds. As a USAW BOD member, my position is to follow USADA and WADA directives and clean up the sport internationally, but I feel for the athletes that are beating their heads against a brick wall trying to perform at the highest level in a persistent dirty playing field.

Besides coaching and lifting as a masters athlete, I also am on the BOD and will serve until I can no longer serve or get voted out. It is a thankless job, but if you want to impact the direction, there is only one way. I plan to be in weightlifting in some capacity until I die; and frankly I don’t want to live without it. I will not, however, become a referee, so don’t worry, haha.

Who are some of your major influences, people you look up to, etc.? Who are the people you want to thank?

I was lucky to be friends with and in the circles of some of the best American coaches and authorities like John Coffee, Ben Green, John Thrush, Bob Takano, Mike Burgener, Gayle Hatch, Artie Dreschler, and John Garhammer. It was often their support, confidence in me, and inspiration that kept me going. I am grateful to all of them, but of course my own coaches and specifically John Coffee as my mentor since I got into the sport.

Catalyst Athletics thanks Ursula for the words of wisdom. Speaking of wisdom, she also has her own website at www.weightliftingwise.com. Feel free to check it out!