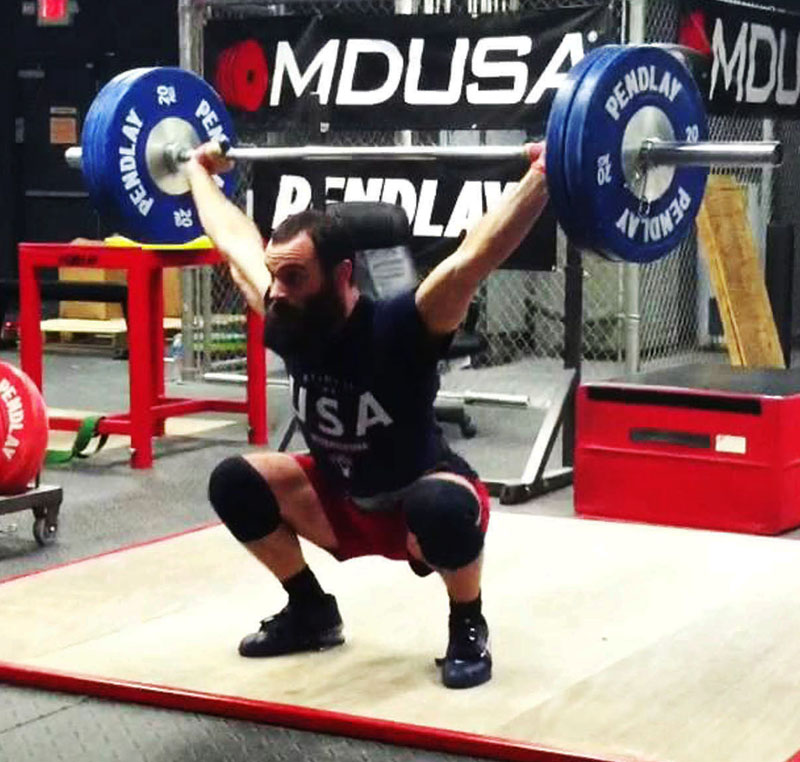 “That guy with the beard looks pretty good.” That’s what I said the first time I saw James Tatum compete. It was at the 2012 American Open in Palm Springs, I believe. This was the time period when the Great USAW CrossFit Population Explosion, as it will be known in the history books, started to kick into overdrive. I saw a bald guy with a wicked beard competing in the 77 kg class and I was pretty impressed because I hadn’t really heard of him before, but he was hitting some damn good weights on the platform. James won that American Open on his last clean and jerk, so it was obvious that this guy was going to be a heavy hitter.

Fast forward just a couple of years, and James is the current US National Champion in the 77 kg class. His rise to the top has been quick, which puts him in a tremendous position for the future. He’s still young, and his potential for much bigger lifts is clear. Like many of us, he came into the sport through a variety of experiences. After some varied activity in strength sports, he settled into the O-lifts. It didn’t take James long to put himself on the radar of pretty much everybody in USA Weightlifting, and we’re happy to give you a better look into the life of one of America’s fastest rising weightlifters.

I grew up living on a sailboat, traveling all over the east coast and the Bahamas, before settling down in NC when I was in 5th grade. After my transition into being a landlubber, I started powerlifting and wrestling when I was about 14. I was not particularly good at either of those sports, but I enjoyed them. After high school, I went to UNCW to get a BS in Exercise Science. In Wilmington, I started working at an MMA gym where I coached Strength and Conditioning. I currently live in Charlotte, NC with my wife (who is expecting!) and train full time at Muscle Driver USA, which is right over the border in SC. I’m also a part owner in CrossFit Smithfield and SISU Strength and Conditioning.

I took a weightlifting class at a local CrossFit. Six weeks later, there was a competition and I was hooked. I started training full time while looking for a coach. It was about a year later when I got onto Team MDUSA and started getting coached by Glenn Pendlay and later Don McCauley. That is when I really started getting better and developing a consistent technique. My best competition lifts before joining the team where 137/155 as an 85kg. Now my best lifts in competition are 146/171 as a 77kg lifter.  Best training lifts are 151/177.

I train nine times a week. Twice a day on Monday, Wednesday, and Friday.  Once a day on Tuesday, Thursday, and Saturday. For most of the team, we try to peak for Nationals and the American Open. If someone makes an international team, the peaking changes a little. For example, in 2013 I peaked for the World Championships and trained through Nationals. I train mostly at higher percentages, ideally hitting 90% + 3 times a week on the lifts or their variations.  We do complexes far out from competition and progress into lifts off the floor closer to competition. The main squat program we do is a Texas Method or some slight variation of it. I have recently started adding in 30 minutes of stretching and body weight exercises each morning. I got that from Coach Zygmunt at the OTC after I spent a week there right before Pan Ams.

Describe some of the obstacles you face, or maybe some things that frustrate you in your weightlifting life.  What kinds of changes would you like to see, either personally or with the sport in general?

I would not call this an obstacle, but my wife and I are expecting a baby in November. There are going to be some changes in my life as a whole and it will be interesting to see how being a full time weightlifter and father goes! As far as the way weightlifting in the US is going, I wouldn’t say I have too many complaints or frustrations. It is growing fast right now, so we will have to see what happens.

I have three main goals right now, in no particular order. First is to medal at an international competition. Second is to make an Olympic Team. Third is to break the American record in the snatch (157.5kg in the 77kg weight class). I would like to stay in the 77kg weight class until 2016, and then possibly move up to 85kg and train for 2020. After my competitive years are over, I would like to start coaching some youth and junior lifters.

My high school power lifting coach Jared Olson had a huge influence on my training. That is where I learned all the basics of training both physically and mentally. I would also not be where I am at today without Coach Glenn Pendlay and Muscle Driver USA. They supported me as a weightlifter and provided the best environment to get better. The rest of Team MDUSA has a large influence on my training as they are supporting and challenging me every day. Last of all, my wife Stefanie who gives me the most support and loves that I am doing what I love!

We’re all glad you jumped off the sailboat and stepped onto the platform, James. Keep pounding the stone, and we’ll all be ready to congratulate you when you hit those big goals you’ve set for yourself!