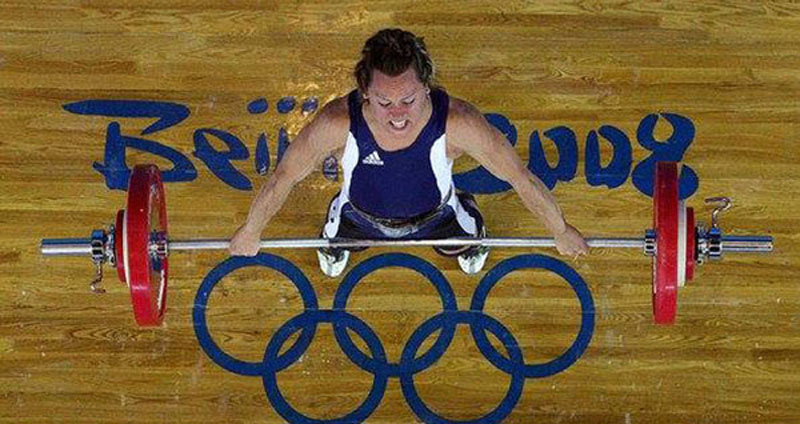 We all love those touching stories about athletes who start at the bottom and then go all the way to the top, right? You know the ones I’m talking about. A young kid wanders into a gym one day and learns about a sport. Then years go by as the kid trains hard, competes, and moves up the ladder towards the big time (emotional motivation music playing in the background). One day, the kid finally reaches the pinnacle and makes the Olympic Team. It’s heartwarming. A journey like this is one of the coolest things you can see in sports, and Carissa Gordon lived it.

I have to confess that I have a sentimental attachment to this month’s article. I’ve known Carissa for a long time, almost throughout her entire weightlifting career. We’ve talked a lot over the years about the ups and downs she’s gone through. When she made the 2008 Olympic Team, it was obviously a great feeling for a lot of people. She’s the kind of person you want to see at the top, because her character and personality represents the best our sport has to offer.

She’s also a sharp cookie, which means she could have chosen any professional field she wanted after her competitive career ended. But because she loves our sport so much, Carissa decided to take a job with USA Weightlifting and help make the federation better for future generations of weightlifters. Hell, she even married another lifter just for good measure. She and former World Team member Jason Gump tied the knot and started a family back in 2006, bringing her barbell life full-circle. Reading her story is a special opportunity for all of us who are battling it out in this sport year after year.

I started lifting weights at the age of 12 in an after-school program in Essex, Vermont under Coach Chris Polakowski (Coach Pol). Coach Pol was my Phys. Ed. Teacher and also the weightlifting coach at my middle school, Essex Middle School. He noticed I had untapped athletic abilities and encouraged me to try lifting. I went into the weight room one time when I was in 6th grade, but I was the only girl, so I didn’t want to lift. In 8th grade, I was a little more interested in the program because there were other girls lifting and they were winning medals at the National Junior Championships and local competitions in New England and Quebec, Canada. I trained for two months and competed in my first competition, the “Pre X-mas Developmental Meet,” on 12/6/96, and lifted 30 kg in the snatch and 47.5kg in the clean and jerk. This competition qualified me for the 1997 National Junior Championships where I placed 2nd in the 50kg weight class lifting 32.5kg in the snatch and 57.5kg in the C&J. After that, I was hooked on lifting! I did not have pictures of singers or actors/actresses on my wall; I had pictures of female weightlifters who I idolized for their success on the platform (Tara Nott, Lea Rentmeester, Robin Goad, Sally Oats and Cara Heads).

The following year I qualified for the National Junior Squad; this was a camp that USA Weightlifting held that consisted of the top 20 male and female junior athletes. It was a two week long training camp at the Olympic Training Center in Colorado Springs, coached by Mike Burgener. After attending my first year, I went home and told my mother that I was going to live there some day.

Two years later, I received a phone call from Lyn Jones, the National Coach and Women’s Resident Coach at the Olympic Training Center. He was inviting me to a two-month long training camp at the Olympic Training Center in Colorado Springs to train alongside the resident team. I was beyond excited; the women in the program were athletes I looked up to and I would be training alongside them on a daily basis. After I hung up the phone, I went into the kitchen where my mother was doing the dishes and told her, "I'm moving to Colorado in February!" Her response was something along the lines of, "YOU'RE WHAT!? You still have to graduate high school!" After the initial shock (and celebration) wore off, my parents and I set up a plan to graduate high school early so I could go live out my dream to train at the Olympic Training Center.

On February 17, 2001, I flew to Colorado Springs where my new teammate and roommate Emmy Vargas picked me up at the airport. Little did I know I was going to have an awesome career ahead of me and weightlifting was going to take me places I never imagined.

After training for less than one month under the coaching of Lyn Jones, I set my first American Record in the Clean & Jerk of 100.5kg in the 58kg weight class. The record was held by Sally Oates, who was one of my teammates at the Olympic Training Center and a Junior World Bronze Medalist. I couldn’t believe I broke Sally’s record, as she was a role model for me and someone I looked up to.

Moving to the Olympic Training Center to train was the best decision I made to achieve my goal of someday becoming an Olympian. During my nearly nine years as a resident, I made the 2008 Olympic Team, two Junior World teams (Total of four Bronze Medals and Member of the 2001 Female Junior World Championship team), four Senior World teams, one Pan Am Games Team, two Pan Am Championships, and broke many Junior and Senior American Records. I was coached by Bob Morris, one of the best coaches in the country. Bob has an incredible eye for technique, not to mention the patience of a saint. Though I called him crazy nearly every morning when I looked at my workout, I am truly grateful for his guidance and support throughout my career. He always knew I had more in me than I had in myself; if he didn’t push me, I don’t think I would have made it as far as I did.

My personal bests as a 63kg lifter were:

On a personal note, outside of my lifting career, in 2003 I met weightlifter Jason Gump at team processing on our way to the 2003 Pan American Games in Santo Domingo. Jason and Shane Hamman were having lunch together when I sat down with them and Shane introduced us. By the end of that year, Jason and I started dating and were married three years later. We have been married eight years and have a two-year-old daughter, Camille Marie.

On a professional note, I gained interest in the operations of the Olympic movement and the Olympic Training Center. Over the course of nearly nine years as a Resident Athlete, I was employed in various positions within the Olympic movement. After competing at the Olympics, there were two things I was sure of, (1) I would no longer have all the aches and pains and snap, crackles and pops from training three times a day, and (2) I wanted to be a member of "The Team Behind The Team" to contribute to the journeys and success of Team U.S.A. athletes the same way so many people did for me. I completed my B.S. in Business with an emphasis in Sport Management from the University of Colorado at Colorado Springs as the first Olympian to graduate from the program.

Upon graduation, I obtained employment working for the USOC’s Athlete Career Program assisting athletes with resume building, polishing up their interviewing skills and anything that would help them become successful off the field of play. In 2011, I was presented with the opportunity to work with USA Weightlifting and I couldn’t pass it up. Though I am no longer competing, my love of the sport is still fulfilled through my responsibilities to the organization. I have been with USA Weightlifting for three years and serve as the Director of Corporate Services being responsible for assisting enhancing growth, development, execution of branding, marketing, donation, sponsorship, promotions, member benefits, communications and social media initiatives. I truly enjoy coming to work every day knowing that my efforts are contributing to the successes of the athletes of the organization.

The mindset of an athlete is to become stronger and better at your sport. I have transferred this mindset into my professional life as well. In 2013, I was accepted into the Keller Graduate School of Management. I am currently pursuing a Masters in Public Administration (M.P.A.) with an emphasis in non-profit management. In addition to working towards completing my M.P.A., I am also enrolled in a yearlong management training program through the US Olympic Committee called Team USA Elite. I am always striving to become a more effective employee and believe I will be a lifelong student.

You’ve made the transition from athlete to administrator in the sport.  Describe that process to us. What are the biggest similarities and differences between being an athlete and being involved in the federation?

Athletes of every age and ability have great skill sets that transfer over into the working world. We are goal-oriented, focused, driven, dedicated, possess excellent time management skills, have the ability to perform under pressure, and are incredibly motivated. The same characteristics that made me a successful athlete also make me a successful employee. The sport of weightlifting not only made me physically strong, it also developed characteristics that prepared me for life off the platform.

Describe some of the obstacles you face, or maybe some things that frustrate you in weightlifting.  What kinds of changes would you like to see, either personally or with the sport in general?

The main struggle I had during my first year as an employee of the organization is that many people did not realize that I was no longer an athlete, that I had made the transition into being a professional. Some of the membership I have interaction with I have literally known since I was 12 years old. After being with the organization now for three years, many people know I am no longer competing and the question I usually get is, “When are you coming back?”

I am excited to see the sport growing at a record breaking pace and can’t wait for every household in America to know Olympic Weightlifting and not confuse it with bench pressing and deadlifting!

I do not have any plans to return to the platform and see my future with the sport solely as an administrator working for USA Weightlifting.

Who are some of your major influences, people you look up to, etc.? Who are the people you want to thank?

The people I want to thank for their never-ending guidance and support throughout my weightlifting career are: Chris Polakowski (Coach Pol), Bob Morris, Leo Totten, Tara Nott, Sherry VonReisen, Sean McCann, Adam Korzun, my sister Jennifer, my parents Marty & Kathie, and my #1 fan and supporter, my incredibly supportive husband Jason.

In a role as a professional, I have had many influential colleagues and peers who have/are guiding me in this new chapter of my life. The individuals I would like to thank are Keith Bryant, Wes Barnett, Michael Massik, Katie Garcia, James Sayno, Cindy Stinger, and Christine Taylor.

We appreciate your time, Carissa.  Good luck with the continued work you do for all the weightlifters of America.  If the sport doesn’t succeed, it’s your damn fault.  (Author’s Note: Forgive me, loyal readers. Carissa and I exchange jabs all the time, so I had to get one in.)