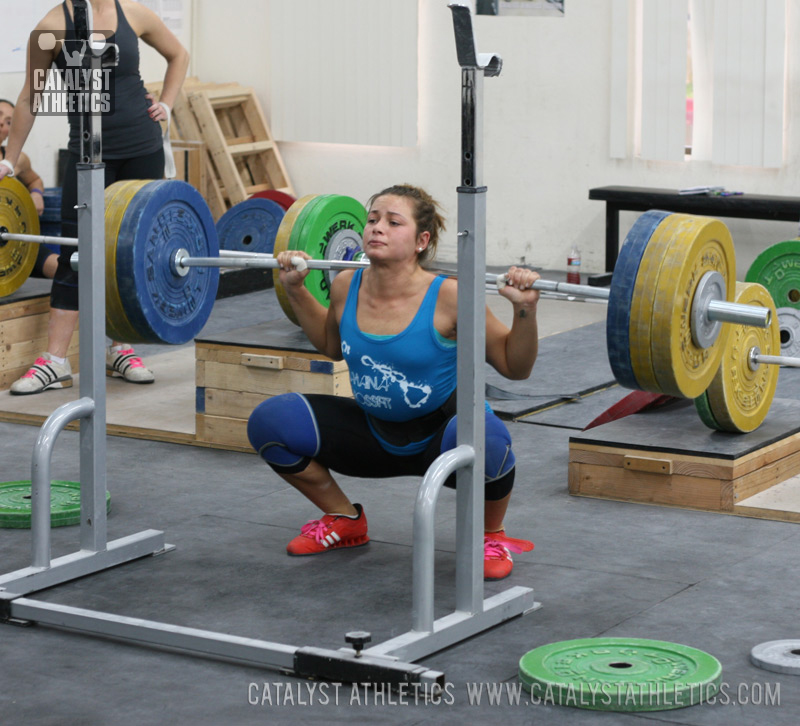 “Ouch, that looks like it really hurts your knees!”
If you’re a weightlifter, try to make a mental list of how many times you’ve heard somebody say this to you. Irritating, isn’t it? Civilians have always seemed to have this perception that weightlifting is a bone snapping slaughterhouse where it’s just a matter of time before you jump into the bottom position of a clean and your patella will fire out of your body and shoot across the room. I guess it’s because of the heavy weights involved and the positions of the Olympic lifts, I don’t know. But it gets annoying that people think our sport is the most dangerous physical act imaginable.
Because the truth is a little different. Now, I’m not going to sit here and tell you that Olympic weightlifting is completely injury-free, or that you have absolutely zero physical risk if you decide to train the sport. That would be lying. Any sport, from weightlifting to hockey to football to golf, has some potential for damage. (Golf, really? Yeah, remember when Tiger Woods won the US Open a few years ago while he was limping around on a torn ACL and a double stress fracture? It’s possible to get hurt in golf, even if you have a solid extra-curricular activity program like Tiger does. Oh mama…I crack myself up!)
But the important thing to remember is that you can avoid most injuries in weightlifting if you have proper technique, an intelligent training plan, and even more proper technique. That’s the triple truth, Ruth. Hitting the right positions with your body and planning out your heavy training appropriately throughout the year will drastically reduce any chances for physical trauma. I’ve been training and competing year-round since 1988 and I’ve had two knee injuries. One of them happened in 1999 when I got myself into a bad position with a heavy jerk overhead. I partially stretched my ACL, but I never had to have surgery on it and I’ve continued to lift on it for twelve years with no big problems. The other one happened from a freak accident when I was training for highland games throwing. I continued to lift on it successfully for four years before I had to finally have surgery, but the damage was done from something outside of lifting. So, I’ve got twenty three years of training and competition, two injuries and only one surgery.
The doctor who did my surgery is a big name in the field of sports injury treatment, and he told me something interesting. “People think that lifting weights is bad for your knees. Actually, lifting weights is one of the best things for your knees. The things that are bad for your knees are sports that involve a lot of twisting and impact, like soccer and football.” That’s straight from the horse’s mouth.
So don’t let public misperception stop you from becoming a weightlifter. It’s possible to get hurt, sure. I’ve been hurt. But here’s the bottom line, in my opinion. I look back at the injuries I’ve had, and then I also look at my weightlifting career and what I’ve been able to accomplish in the sport. I ask the question, “Was it worth it? Was knee surgery worth all those years of competing and lifting, living a life in a sport you love?”
You betcha. And don't you agree that anything good in life involves taking a few chances? I think you have to be willing to roll the dice sometimes, with intelligent strategy involved. It's called "calculated risk." As Tony Soprano once said, "No risk, no reward."

samuel aguirre
Awesome post, I get the strangest looks when I squat heavy to full depth at the gym I go to. I just ignore them and pretend I don't speak English :)
nunh
No easy way out - nothing is free but, life is so much better when you do what you love, be with who you love, and risk is part of it - nothing worth anything is easy and risk free. Great article!
LP
Injuries are the price we pay for not sitting on our asses our whole lives.
Torin Bruno
Coach Foreman is the man! No doubt one of the best and most inspiring coaches I have ever played and competed for.. He brings the absolute best out of you and gets you to peak performance!
Matt Foreman
Tori Bruno! I remember you well, you were one of the toughest players I coached. Glad to see you on here and I hope you're well.
Marc
Reassuring post, but it would be even more so if you could back that up with some more extensive statistics than your personal history of injuries.